Soldiers with the California National Guard teamed up with Border Patrol agents to seize nearly a quarter-million dollars in methamphetamine. The guardsmen are assigned to assist Border Patrol agents with non-immigration enforcement activities as part of Operation Guardian Support.

San Diego Sector Border Patrol agents arrested a 31-year-old woman on Interstate 15 after discovering 51 bundles of methamphetamine inside her vehicle. The agents seized the vehicle and drugs and turned the woman over to the Riverside County Sheriff’s Office where she faces charges of smuggling narcotics, according to U.S. Customs and Border Protection officials. 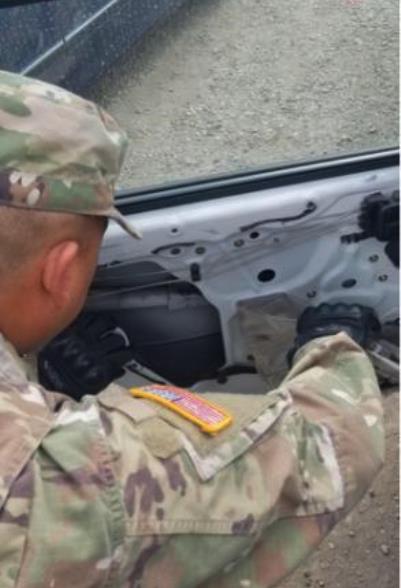 Later in the week, Border Patrol agents and a California National Guardsman conducted a secondary inspection on the vehicle that was stored in a secured facility. The solider found 11 additional bundles of methamphetamine located inside the door panels of the SUV, officials stated. Agents took custody of the bundles and tested it to confirm the content.

The additional bundles of meth added 13 pounds to the original 55 pounds originally found in the vehicle. Officials estimate the value of the 68 pounds of methamphetamine to be about $206,000.

By utilizing members of the California National Guard in support positions like this, Border Patrol agents say they are able to return to their front-line duties of securing the border, officials stated. Under California’s sanctuary laws, the guardsmen are not allowed to have any contact with illegal immigrants, nor are they allowed to be armed.

San Diego Sector Chief Patrol Agent Rodney S. Scott praised the deployed guardsmen, saying, “Although the California National Guardsmen have been on duty for only a couple of weeks, they have quickly fit in and are a great asset in assisting the Border Patrol to protect our communities.”

Missouri National Guardsmen assigned to the Tucson Sector assisted Border Patrol agents in apprehending a human smuggler who attempted to flee to avoid arrest, Breitbart Texas reported. The Guardsmen used their UH-72 Lakota helicopter to provide air cover and tracking as the driver led agents on the ground in a high-speed chase.