MCALLEN, Texas — A team of gunmen tried to rob a jewelry store in this border city by holding a police officer and several shoppers at gunpoint. Despite no shots being fired, the robbery caused panic among local residents as various social media users and journalists claimed that the robbery was an active shooter situation.

The robbery took place at La Plaza Mall shortly after noon when seven men entered a jewelry store, McAllen Police Chief Victor Rodriguez revealed to Breitbart Texas. Rodriguez stated that the case was a robbery and not an active shooter event or shooting. As Breitbart Texas initially reported, Rodriguez stated that the sound of glass display cases being broken by the suspects is believed to have been mistaken for gunfire. It remains unclear if the guns used by the robbers were real firearms or not.

Surveillance video from the robbery that was widely shared on social media revealed the moment when the gunmen rushed into the store and pointed a gun at the head of an off-duty McAllen Police officer who was working as a security guard. The gunman orders the officer to kneel while he points his gun at him and at some shoppers.

A customer is seen hugging a woman and child while getting in front of them to protect them from the gunmen. The shoppers then sneak out of the store while the gunman turns his head. Moments later a police officer rushes into the store pointing his gun at the suspect. Moments later two men who appear to be plain-clothes officers rush in to help arrest the gunmen. 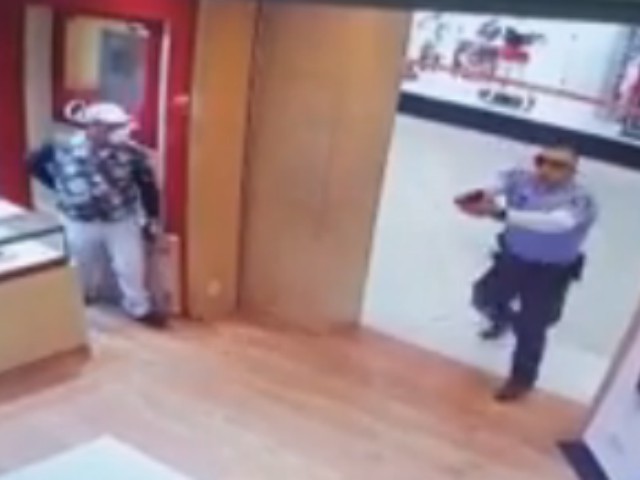 Despite the quick response by law enforcement, the incident became viral as various social media users and even local journalists warned residents to avoid the area due to an active shooter. A local constables office whose jurisdiction does not include McAllen and did not respond to the scene also disseminated through social media the reports of an active shooter leading to further panic.