Could a non-lethal defensive system developed by the Department of Defense nearly ten years ago play a role in deterring large groups of migrants from storming across the U.S. border? The system, referred to as a Solid State Active Denial System (SSADS), creates an intolerable pain response without causing any injury or long-term effects and forces the target to flee from the area.

A video released by the U.S. Marine Corps in 2012 shows a demonstration of the SSADS that shows its effectiveness against an individual or a large crowd. The system utilizes an RF system to create a sensation of intense heat forcing the subject or subjects to quickly retreat.

The demonstration takes place at Quantico, Virginia, and shows the reaction of an angry mob to the defensive system. It also shows its effectiveness against individuals who can be specifically targeted, such as the leaders of a group. 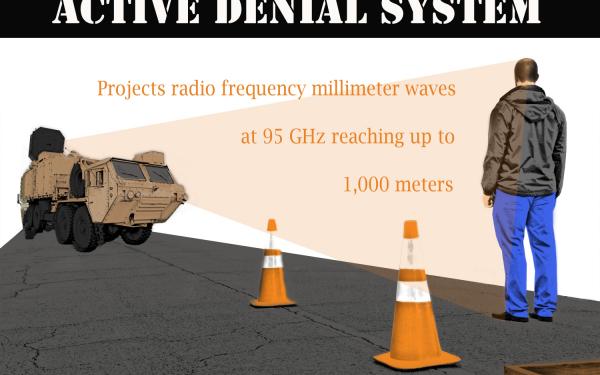 Another video released earlier this year shows more detail about how the system works and the types of platforms on which the weapon system can be deployed.

“The Active Denial System is needed because it’s the first non-lethal, directed-energy, counter-personnel system with an extended range greater than currently fielded non-lethal weapons,” according to a statement released by the Department of Defense.

“Most counter-personnel non-lethal weapons use kinetic energy (rubber rounds, bean bags, etc.). A kinetic-based system has a higher risk of human injury, and its effectiveness varies in relation to the size, age, and gender of the target,” the statement continues. “The Active Denial System, however, is consistently effective regardless of size, age and gender and has a range greater than small-arms range. The Active Denial System will provide military personnel with a non-lethal weapon that has the same effect on all human targets.”

Officials report an effective range of up to 700 yards for the non-lethal defensive system. The DOD reports that it can be used for crowd control, protection of convoys and personnel, and security at checkpoints.

Public discussions this week by many ask if this type of system could prevent the kinds of scenes witnessed when the caravan migrants stormed the Guatemala-Mexico border last month.