An unknown Mexican cartel used a dismembered body to threaten the mayor of Cancun and some top police officials. The message was delivered with a narco-banner posted near the remains.

Local authorities received a call about a body in the Pedregal neighborhood and dispatched police to secure the scene. The gunmen left various dismembered body parts around a banner that called out Cancun Mayor Mara Lezama for not keeping agreements with organized crime. Lezama is part of Mexico’s new ruling party Morena, which is the same as current president Andres Manuel Lopez Obrador (AMLO).

The banner also mentioned a certain cartel was paying $1 million pesos per week to “Capella” through “Abarca.” The reference likely points to Quintana Roo State Security Secretary Alberto Capella Ibarra and Cancun Public Security Secretary Jesus Perez Abarca–however authorities in the region have not made any public statements on the matter. 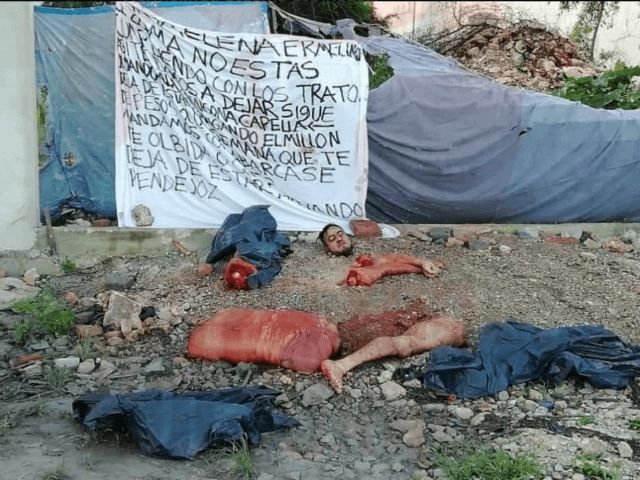 The popular beach resort city is seeing an escalation of violence as various cartels like the Gulf, factions of Los Zetas, Cartel Jalisco New Generation, and others are fighting for control of the local drug trade, prostitution, and business extortion arrangements. Breitbart News reported last week on the execution of seven victims inside a home in the city. Cancun closed 2018 with more than 540 murders, a figure almost double the previous year which had been a record-setting one. The level of violence had not been seen before in the once peaceful tourist resort area.

The violence has also spread to other nearby tourist hotspots like Playa Del Carmen, where earlier this month, two men carrying rifles entered a local bar and began firing–killing seven.

Editor’s Note: Breitbart Texas traveled to the Mexican States of Tamaulipas, Coahuila, and Nuevo León to recruit citizen journalists willing to risk their lives and expose the cartels silencing their communities.  The writers would face certain death at the hands of the various cartels that operate in those areas including the Gulf Cartel and Los Zetas if a pseudonym were not used. Breitbart Texas’ Cartel Chronicles are published in both English and in their original Spanish. This article was written by Tony Aranda and Jose Luis Lara from the Cartel Chronicles project.