Three garbage bags containing human remains from at least two victims were discovered dumped in the western section of Cancun on Wednesday morning.

Breitbart News recently reported that formerly peaceful Cancún continues to experience shocking levels of cartel violence. The previous annual record for murders was smashed in 2018 with 540, as opposed to 2017’s 227.

The most recent find of human remains occurred on Supermanzana 206 after citizens reported the discovery of garbage bags on the side the road, according to local reports. One bag was torn open, exposing a decapitated human head and pair of arms. Once the municipal police arrived, they cordoned off the area and later handed over the scene to the ministerial police of the state attorney general’s office. The bags contained what appeared to be the dismembered bodies of two unknown male victims. Both were apparently tortured and exposed to fire, according to the ministerial police. 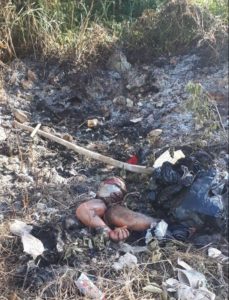 Prior to this most recent discovery, Cancun experienced at least nine homicides between December 24 and 25, according to local media reports.

Among the killings registered, two female victims were dumped on a dirt road in Region 313 near La Luna Extension. Both appeared to be tortured, but the exact cause of death has not been determined.

One of the homicides registered on Christmas Day at approximately 7:30 pm was an unknown female discovered with fatal gunshot wounds near Supermanzana 500, at the entrance of the Sol Campestre subdivision. Investigators found her face-down with four spent shell casings next to her body.

The ongoing violence is attributed to the cartel wars between the CJNG, Los Zetas, Gulf, and independent groups loyal to the Sinaloa Cartel.