Brooks County Sheriff’s deputies recovered the bodies of at least nine migrants in July on ranches located about 80 miles from the Texas-Mexico border. The migrants consist of seven men, one female, and one undetermined. All hailed from El Salvador, Guatemala, Honduras, and Mexico.

The Brooks County Sheriff’s Office provided Breitbart News with reports on the deaths of nine migrants recovered in July. The discoveries began on July 8 and spanned through July 28. All apparently died while being smuggled around the Falfurrias Border Patrol Checkpoint located approximately 80 miles north of the Mexican border on U.S. Highway 281. Smugglers are known to drop off the migrants on ranches south of the checkpoint and march them through the hazardous surroundings.

“Unfortunately, we have become one of the deadliest counties in the United States for these people who are attempting to illegally make their way into the United States,” Brooks County Sheriff Benny Martinez told Breitbart News. “These smugglers, who are often connected in some way to Mexican cartels, have no regard for the health and safety of these people and will simply leave them behind to die if they can’t keep up.”

Martinez told Breitbart News he doesn’t expect there to be much in the way of national media attention for the nine. He said the focus seems to be more on sensational incidents and incendiary rhetoric rather than solutions to stop senseless deaths.

The deputies who work for Martinez face the gruesome task of recovering what is left of the migrants after insects, animals, and the scorching Texas heat take their toll. Breitbart News traveled with the deputies to several body recoveries in the past and witnessed the common sights and smells the encounters.

Brooks County Deputy Jonathan Melendez received a call about a body on a ranch near the Border Patrol checkpoint on July 29. A Border Patrol agent escorted him 7.4 miles onto the property where he found the skeletal remains of what appeared to be a migrant. A search of the remains and tattered clothing did not result in any identification documents. 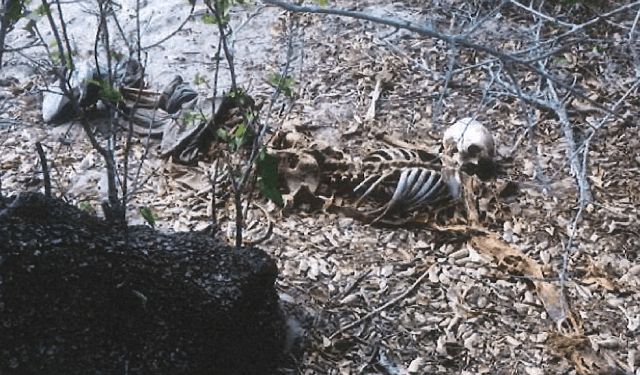 A justice of the peace who accompanied Melendez to the scene made the statutory declaration of death and ordered an autopsy to be performed by the Webb County Medical Examiner’s Office in Laredo, Texas.

On July 28, Brooks County dispatchers sent Deputy Elias Pompa to a ranch located north of Falfurrias. This is an area where smugglers would pick up migrants who successfully completed the days-long trek around the checkpoint.
The rancher showed Pompa the body he found in a hunting blind. Pompa reported the body to be in an advanced state of decay — bloated and covered with maggots. The body appeared to be that of a deceased male wearing only black pants. A search of the body revealed a wallet containing a Salvadoran identification card. 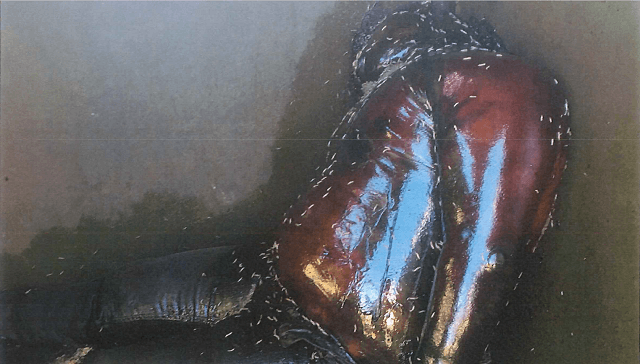 Brooks County, Texas, officials recover the body of a migrant who appeared to seek shelter from the heat in a hunting blind. (Photo: Brooks County Sheriff’s Office)

A local funeral home employee took custody of the body and arranged transportation to the Webb County Medical Examiner’s Office for further processing.

Dispatchers sent Deputy Bianca Mora to another ranch on July 23 after a report of another body. Mora met a ranch security officer near the town of Encino and traveled 4.25 miles onto the ranch. The deputy noted the remains of a man lying flat on his back in an open area with his arms spread apart. He wore brown pants, black shoes, a green shirt, an orange necklace, and a silver bracelet. 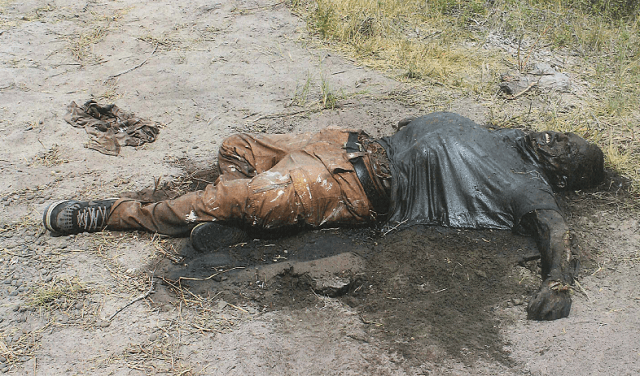 A search of the deceased’s body revealed a wallet containing $390 USD, $900 pesos (MEX), a cell phone, and a Mexican identification card belonging to Omar Caricio Cervantes, 41, a Mexican national. It is not known if the ID card belongs to the deceased migrant.

Officials arranged transportation of the body to the Webb County Medical Examiner’s Office.

The duty of recovering another body fell on Investigator Vicente Lopez on July 18. He arrived at a ranch located southwest of Falfurrias in a well-known pickup area for human smugglers.

A ranch worker said he found the body while checking water wells. He said he had not been in this particular area for about a week before discovering the remains. 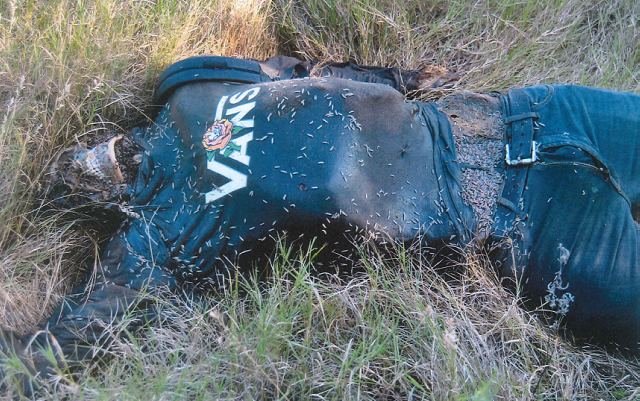 Lopez observed the deceased male on his back with one arm stretched out and the other folded across his chest. He reported the man to be wearing black military-style boots, black pants, a black sweatshirt, black belts, and a black backpack. The sweatshirt bore a “Vans” logo with a rose. A search of the migrant’s pants produced a black wallet containing a Mexican voter identification card issued to David Balderas Ramirez, 27. It is not known if this card belongs to the deceased.

The justice of the peace made the statutory death pronouncement and a funeral home worker took possession of the body for transportation to Webb County.

On July 17, dispatchers again tasked Deputy Mora for another body recovery. The deputy met a ranch security officer and traveled 10 miles onto the property located southwest of the Border Patrol checkpoint. 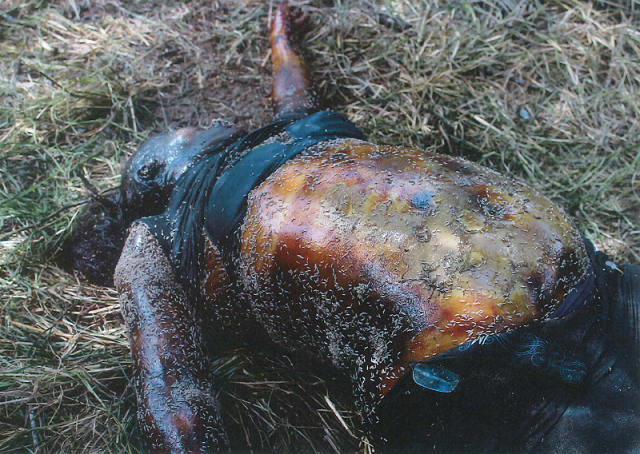 Mora observed the partially unclothed body of a female. The woman’s shirt appeared to be pulled up above her bra. Her bra also appeared to be pushed up and her pants were unbuttoned. The deceased woman was lying on her back underneath some brush with her arms stretched out. The deputy did not report finding any identification documents as to the woman’s name or nationality.

An autopsy to be performed by the Webb County Medical Examiner’s office will attempt to determine the woman’s identity and cause of death.

Mora received dispatch on July 15 to recover the body of another deceased migrant. Mora met with a Border Patrol supervisory agent who escorted her to the death scene located on a ranch southwest of the Border Patrol checkpoint. 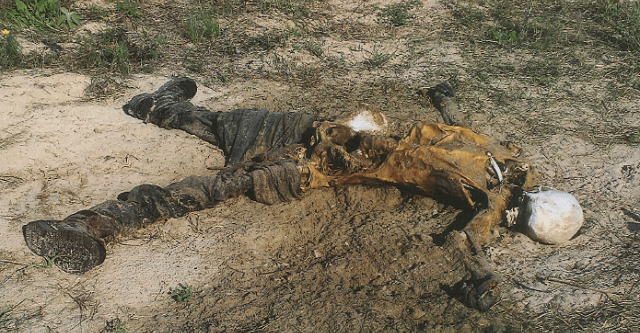 Deputies from Brooks County, Texas, recover the near-skeletal remains of a migrant who died while being smuggled around the Border Patrol checkpoint. (Photo: Brooks County Sheriff’s Office)

Mora observed the body of a migrant in an advanced state of decay lying on their back with the arms and legs outstretched. The body appeared to be clothed in jeans with a belt and boots. She did not report any identification documents indicating the name, nationality, or gender of the deceased migrant.

Dispatchers sent Deputy Jonathan Melendez to another ranch located west of Falfurrias on July 14, official documents indicate. After meeting with a Border Patrol agent, Melendez traveled into the ranch located in a known smuggling pickup area, he observed a deceased male on his back. The deceased wore blue jeans, a black t-shirt, and gray and white tennis shoes. He carried an Avance backpack which supported his head and had a black shirt tied around his waist.

A search of the body recovered a copy of an identification card issued to Leonel Perfecto Perez Gonzalez, a 35-year-old Guatemalan national. It is not known if the identification card belonged to the deceased migrant. Officials also recovered a cell phone with a battery from a zip lock bag, and a small amount of U.S. cash. Officials arranged transportation of the remains to Webb County for an autopsy.

Three days earlier, dispatchers again sent Melendez to a ranch located northeast of the Border Patrol checkpoint in a known pickup area for smugglers. The deputy met with a Border Patrol agent who escorted him to the location of the body. Melendez observed the body lying on its back wearing a blue and with a checkered long-sleeve shirt, blue jeans, and brown boots. The report indicates the gender of the body could not immediately be determined. A search of the body resulting in finding a black wallet, a cell phone, and a charger. The wallet contained an identification card issued to Yessica Carolina Castillo Buezo, a 35-year-old Honduran female. It is not clear if this card belonged to the deceased. 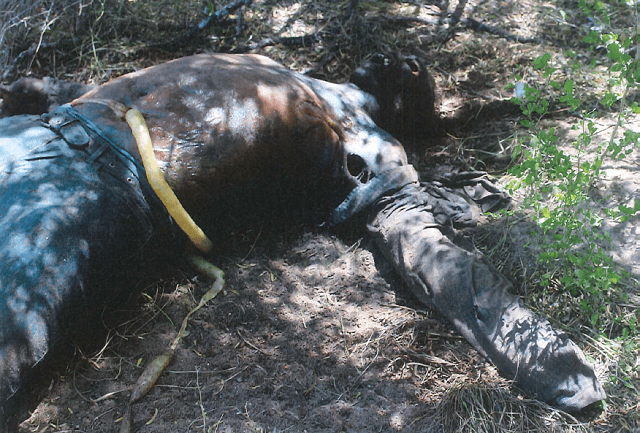 Brooks County deputies recover the partially eaten remains of a migrant who died nearing the completion of his trek around the Border Patrol Checkpoint. (Photo: Brooks County Sheriff’s Office)

Officials arranged transportation of the body to Webb County for an autopsy to determine the cause of death and identity of the deceased migrant.

Between July 11 and 18, Brooks County deputies recovered the bodies of five migrants — four more during the entire month.

The July discoveries bring the total number of migrant deaths in Brooks County for 2019 to 27 — about 20 percent of all migrant deaths reported in Texas this year and 12 percent of the national total reported by the Missing Migrant Project.

In October 2018, Martinez sat down with Breitbart Border/Cartel Chronicles Editor-in-Chief Brandon Darby and border journalist Ildefonso Ortiz to discuss the humanitarian consequences of the United States’ failure to secure the border with Mexico.

“Our county is not located on the border,” Sheriff Martinez said, “But we have more migrant deaths than probably any other county in the country.”

“It is a horrible death faced by these people who are abused throughout the entire smuggling process. And, it is an extremely frustrating and emotional burden put on our deputies who must recover the remains, Martinez concluded. “As long as Congress fails to take action to fix the laws that are encouraging Central American migrants to cross the border in unprecedented numbers, we will continue to see these deaths.”