Deputies with the Brooks County Sheriff’s Office recovered the decaying remains of a migrant who attempted to circumvent the Falfurrias Border Patrol Checkpoint earlier this month. Deputies recovered 35 bodies or skeletal remains so far this year.

Brooks County Sheriff’s Office dispatchers received a call from Border Patrol agents in reference to a body found on a ranch located near the immigration checkpoint on U.S. Highway 281, just south of Falfurrias, Texas. Dispatchers sent Deputy Samuel Rosas to the ranch where a Border Patrol agent escorted him, a justice of the peace, and a funeral home worker to the scene of the death approximately four miles into the ranch, according to official police reports provided to Breitbart Texas. 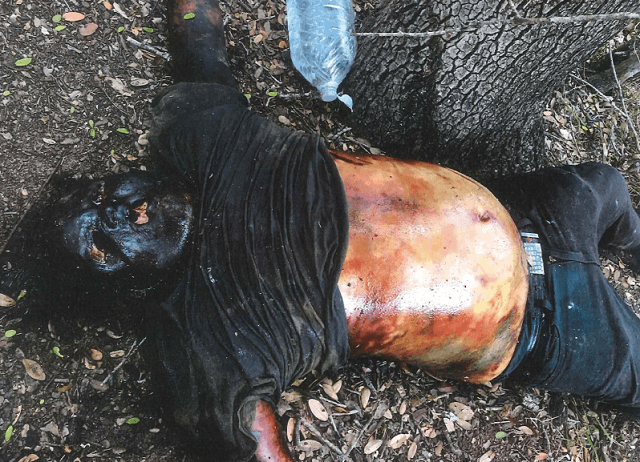 The report states the federal agent found the body while on patrol. This area is a well-known route for smugglers to attempt to march their “human cargo” around the immigration checkpoint, according to local authorities. Agents routinely patrol this area to find migrants before they are abandoned and left to die, Sheriff Benny Martinez told Breitbart Texas.

Photos of the scene show the bloated body lying on its back beneath a stand of oak trees. Decomposition suggests the body may have only been dead for a short time as animals and insects do not appear to have begun their work.

The justice of the peace made the statutory death declaration while Deputy Rosas photographed the scene and inventoried the migrant’s personal possessions. Rosas found a Mexican identification card issued to 32-year-old Jose Luis Llorente Ruiz. It is not known if the card belongs to the deceased migrant.

The funeral home employee collected the body and will arrange transportation to the Webb County Medical Examiner’s Office in Laredo, Texas. There, an autopsy will be performed and the medical examiner will attempt to positively identify the body.

So far this year, 35 died in this single county in South Texas. This accounts for nearly 20 percent of the more than 180 migrants found dead while or shortly after crossing the Mexican border into Texas, and more than 10 percent of all migrant deaths along the entire U.S.-Mexico Border.