Cartels repeatedly demonstrate their capabilities as effective propagandists against the general public, rivals, and even layers of Mexican or international governing bodies. Their practices try to blur the lines between criminality, terrorism, and even righteous insurgency — raising red flags for national security.

Though typically unrealized, many Mexican cartels manage their organizations like large corporations complete with accounting, legal, and public relations departments. It is common for members to refer to their groups as a “companies.” Simply referring to them as “drug cartels” minimizes their impacts on life and culture south of the border and beyond.

Dedicated propaganda cells traffic in all forms of new and old media outreach. They place vinyl banners on government buildings, bridges, overpasses, and monuments. In one instance, they even dropped leaflets from an airplane reminiscent of psy-ops efforts prior to a military invasion. They also use social media to disseminate graphic torture footage to catch the attention of international journalists. Every message is designed to either threaten rivals, defend its actions, or even promote good deeds for the benefit of the civilian population living on their turf.

Mexican journalists also walk a tightrope when attempting straight coverage of cartel exploits. Such work in Mexico is some of the most dangerous in the world. In 2019, nearly 250 cases of violence directed at media personnel in the country were documented. Investigative reporters willing to dig into cartel and government connections are particularly at risk.

These organizations do not circulate press releases and hope for glowing coverage. Many Mexican newsrooms are compromised to the point that a particular cell will be in constant contact to act as a de facto assignment editor – deciding which unflattering stories go unpublished versus items that make rivals look bad in the public eye. Failure to cooperate too often means death.

Cartels are bold in their efforts to secure the hearts, minds, and especially stomachs of those living impoverished lives around them. During high holidays, cartel gunmen will lay down arms in public squares to distribute toys or food as if they were the Red Cross. Recently in Michoacán, Cartel Jalisco New Generation (CJNG) posted a video distributing food to the poor. In Tamaulipas, the Gulf Cartel hands out Christmas gifts annually near the Texas border. Gunmen even manage to use local radio stations to promote their charitable acts. During Hurricane Ingrid in 2013, convoys of vehicles were used to distribute tons of food and supplies.

Popular culture is also leveraged directly and indirectly to idealize the cartel lifestyle. Folk music dubbed “narco-corridos” promote bravery, riches, and sex surrounding the traffickers. Groups will even single out singers praising a rival faction for death. One music video uploaded to YouTube in 2013 promotes the Sinaloa Cartel by mixing staged and actual footage from sicarios.

Gunmen may even dabble in viral dance video challenges in full tactical gear.

Mexican organized crime can also wield influence over international bodies like the United Nations. The Cartel del Noreste (CDN) faction of Los Zetas developed efforts to astroturf street protests against police forces near the Texas border in Nuevo Leon. They worked to gin outrage against authorities as top-level operatives were targeted for arrest. Some entities are bold enough to cooperate with “human rights” groups to disseminate conspiracy theories against local governments. In May 2018, the UN issued accusations against federal authorities, suggesting they were abducting CDN members.

Cartels are comfortable using attorneys for public means. No cartel is complete without a lawyer.

In the aftermath of the high-profile arrest and abrupt release of El Chapo’s son, Ovidio “El Raton” Guzman, multiple attorneys in Mexico and the United States were deployed to spin and play damage control. They held news conferences and sat for interviews to praise President Andres Manuel Lopez Obrador’s (AMLO) actions. They also congratulated themselves for their public works on behalf of the Mexican people. One spokesman even explained the Sinaloa Cartel’s plans to build a university, inviting AMLO to attend the first stone laying with El Chapo’s mother. Attorneys also drew a line between the AMLO administration’s decision to release the “Chapito” while condemning those in law enforcement who were responsible for the arrest.

Days later, the Sinaloa Cartel released a branded public apology, which in turn placed much of the blame on federal forces for sparking terror in the state. They go on to thank AMLO for releasing their leader and encouraged authorities to “assume their responsibilities as we are assuming ours.” 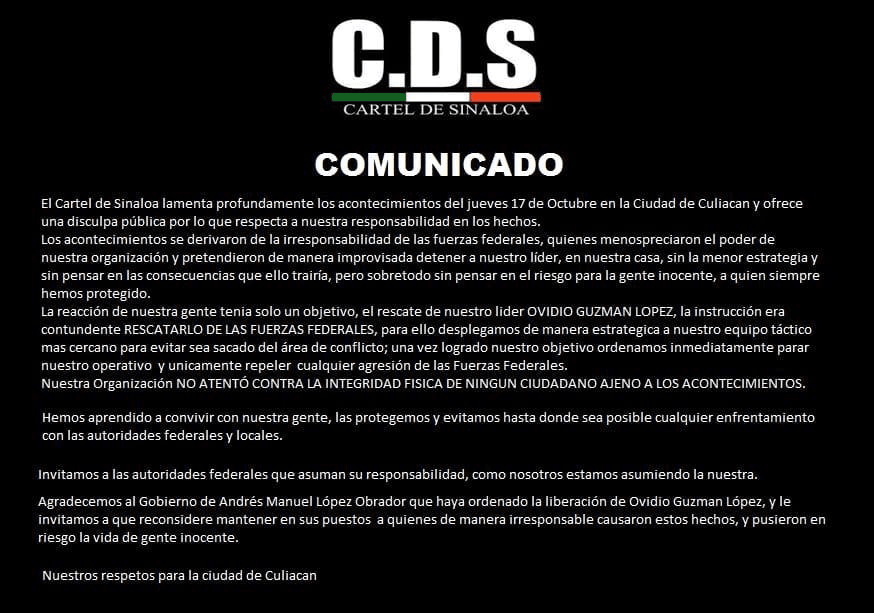 New York-based attorney Jeffrey Lichtman, who represents convicted “El Chapo” Guzman, told PIX 11 “I don’t know what caused this, we don’t even know who was shooting the guns.” He also expressed discomfort with taking claims from Mexico City and Washington officials “as Gospel.”

Mexican cartels are perfecting the art of modern persuasion to threaten rivals with demonstrable violence while, in the same breath, suggesting such actions are in the public interest. Their messages can appear from an overpass during the morning drive and in a Twitter feed before turning off a nightlight. Their influence is seen in the local newspaper and on an FM dial. When innocents are objectively terrorized or harmed, a cleanup crew featuring fixers and charitable gestures follow. Until these sophisticated measures are understood and confronted on a critical scale, cartel control will continue to expand unabated.