During the first week of October, Breitbart Texas cameras returned to Roma, Texas, to see how human smuggling changed since Fiscal Year 2019, when almost a million migrants were apprehended crossing the border between ports of entry. At this time, they sought out law enforcement–not make efforts to elude them.

The most significant shift in human smuggling occurred as a result of national policy changes from the Trump Administration in implementing the Migration Protection Protocols (MPP Program).

The MPP allows for foreign individuals entering or seeking admission to the U.S. – illegally or without proper documentation – to be returned to Mexico and wait for the duration of their immigration proceedings.

Border Patrol agents told Breitbart Texas that people crossing illegally today are mostly Mexican citizens, as opposed to the overwhelming number of Central Americans seen in FY2019. During the visit, Breitbart Texas cameras captured many illegal crossings between the ports of entry from the Roma Bluffs.

CBP agents were observed working closely together from the Office of Field Operations (OFO) and Border Patrol between the ports of entry, going from one part of Roma to the other especially during the morning hours of a shift change. It was obvious that human smuggling organizations in Mexico are aware when CBP personnel turnover because those periods were the busiest in terms of river traffic.

In 3 hours, Breitbart Texas documented 16 separate smuggling incidents. Rafts could be seen ferrying people to what is known as the Small Island — an international point in the middle of the river.

From there, some would walk the final, shallow stretch but others could be seen ferried via small rafts to U.S. soil. This area is called Salinas Crossing.

Within minutes, the smugglers would be observed walking back to the island and getting more people to cross. This went on for several morning until halting that afternoon. 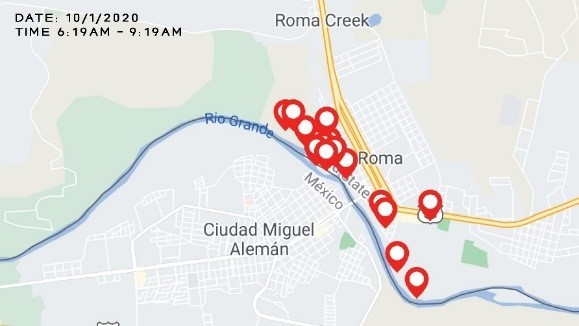