Federal prosecutors charged a Texas man with tweeting a call to assassinate U.S. Representative Alexandria Ocasio-Cortez during the January 6 attack on the Capitol. The man allegedly tweeted multiple times from inside the Capitol including one where he wrote, “Assassinate AOC.”

A criminal complaint released by the U.S. Attorney for the District of Columbia alleges that Dallas, Texas, resident Garret Miller illegally entered the U.S. Capitol on January 6. The complaint further alleges that Miller tweeted a threat to assassinate Rep. Ocasio-Cortez in a Twitter response to a tweet from the representative.

The attack on the Capitol occurred as both chambers of Congress met separately to debate a challenge to the Electoral College vote that would eventually declare Joe Biden to be the president-elect. As the two bodies met in their respective chambers, a large crowd gathered outside the Capitol and forced their way into the building.

The FBI obtained a tweeted video from an account allegedly belonging to Miller. The video reports to show Miller inside the Capitol Rotunda. He reportedly tweeted “From inside congress.” 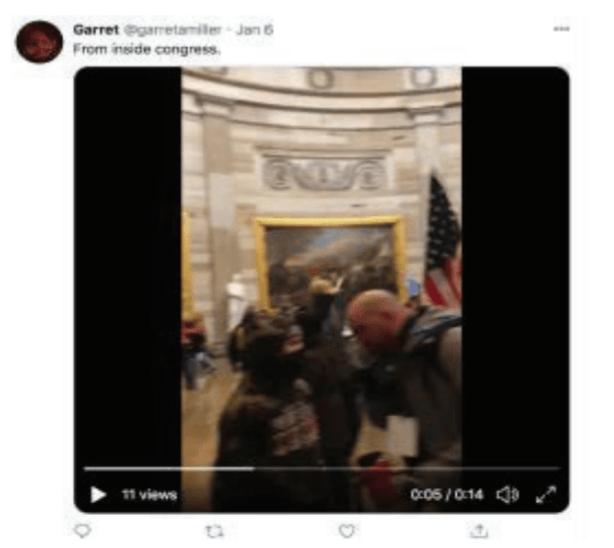 “From inside congress” — Source: U.S. Department of JusticeThe complaint alleges that Miller tweeted some of his planning for the January 6 attack on the Capitol. The complaint states:

In examining MILLER’s Facebook account, there are many posts relating to his involvement in criminal activities at the Capitol. For example, on January 2, 2021, MILLER posted to Facebook, “I am about to drive across the country for this trump shit. On Monday . . .
Some crazy shit going to happen this week. Dollar might collapse. . . . civil war could start . . . not sure what to do in DC.” He also stated on January 3, 2021, that he was bring with him “a grappling hook and rope and a level 3 vest. Helmets mouth guard and bump cap,” but last time he came to D.C. for a pro-Trump rally he “had a lot of guns” with him.

Miller reportedly posted photos on Facebook from inside the Capitol. Security cameras also show a man carrying a U.S. and Trump flags inside the building.

On January 6, Rep. Ocasio-Cortez tweeted “Impeach” in response to the attack on the Capitol. A Twitter screenshot of the post allegedly shows a response from Miller where he wrote:

We acted with honor and we where [sic] not armed. We where [sic] gentle with the police. They murdered a child.

The criminal complaint references the last line as a “directive” to assassinate a House member.

The complaint continues with multiple incriminating posted allegedly made by Miller in the days following the Capitol attack.

The complaint alleges Miller violated 40 counts of 40 USC 5104(e)(2)(G) which makes it a crime to “willfully and knowingly” parade, demonstrate or picket in any of the Capitol Buildings.

The complaint alleges multiple other charges including a “threat to injure the person of another” and for attempting to impede the Electoral College vote count.

In one of Miller’s alleged Facebook posts he reportedly posted a selfie and wrote, “just wanted to incriminate myself a little lol.”

In response to the news of Miller’s charges, Ocasio-Cortez tweeted Miller’s self-incrimination quote and added, “Well, you did!”

“Just wanted to incriminate myself a little”

Miller’s attorney, Clint Broden, responded that his client regrets what he did, according to a CNN report.

“He did it in support of former President (Donald) Trump, but regrets his actions. He has the support of his family, and a lot of the comments, as viewed in context, are really sort of misguided political hyperbole. Given the political divide these days, there is a lot of hyperbole,” the attorney stated.

Federal law enforcement agents reportedly arrested Miller on Wednesday. He is scheduled to appear in court on Monday.