A Texas Department of Public Safety trooper is fighting for his life after being shot Friday night. The trooper is listed in critical condition after being shot multiple times. Police later found the alleged shooter dead in the woods after an apparent suicide.

UPDATE: Police found the suspected shooter, DeArthur Pinson, Jr. 36, dead in the woods not far from where the shooting of Trooper Chad Walker, KWTX reported. Trooper Walker continues to fight for his life after being shot multiple times.

The association reported that Trooper Walker responded to a stranded motorist on U.S. Highway 84 near Mexia, Texas. Mexia is located northeast of Waco.

“Before Trooper Walker could stop his patrol unit, a black male, identified as DeArthur Pinson Jr., immediately emerged from the driver’s seat of the disabled vehicle armed with a handgun and fired multiple rounds at Trooper Walker through the patrol unit’s windshield,” the association posted on Facebook.

After Pinson allegedly shot Trooper Walker, he walked back to his vehicle, grabbed a black backpack and fled on foot.

Trooper Walker sustained multiple wounds to the head and abdomen, the association disclosed. EMS crews transported the trooper to Baylor Scott & White where his reported to be in stable but critical condition.

The State of Texas issued a Blue Alert as an intensive manhunt is underway for the alleged shooter. Police warned Pinson was considered to be armed and dangerous. 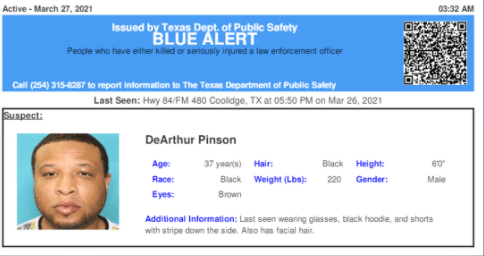 Pinson wass a resident of Palestine, located in Anderson County, Texas, KTRK ABC 13 reported. He reportedly served a ten-year prison sentence for armed robbery in Houston County. Records indicate police in Palestine arrested him in 2003 for military desertion, according to the Palestine Herald.

Posted by My heart belongs to a Texas State Trooper on Saturday, March 27, 2021

Trooper Walker is a six-year veteran of the Texas Department of Public Safety. He is married and has three children, ages 15, 7, and two months.

Editor’s Note: This developing story has been updated with information regarding the apparent suicide of the alleged shooter.