Val Verde County Sheriff Joe Frank Martinez says the Biden administration is not testing any of the nearly 10,000 migrants being held in a makeshift border camp for COVID or anything else. He said they are alone at the border dealing with a national issue.

“Nobody is being tested for anything,” Sheriff Martinez told reporters during an interview near the Del Rio International Bridge where the Biden administration is holding nearly 10,000 migrants. 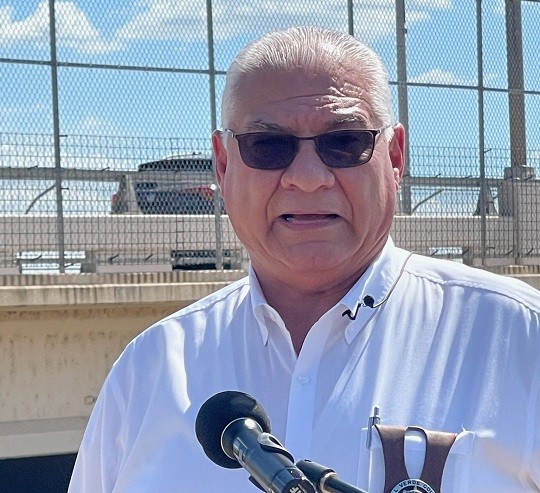 The Border Patrol is unable to even move the migrants into processing centers due to the massive numbers of border crossings. Currently, Border Patrol is holding nearly 10,000 people in the makeshift camp with inadequate staffing or supplies to take care of the migrants.

“My son is in the Border Patrol,” Martinez said. “I tell him to keep his head up and do his job.”  He added that he worries about them doing a job that no one else would be willing to do. 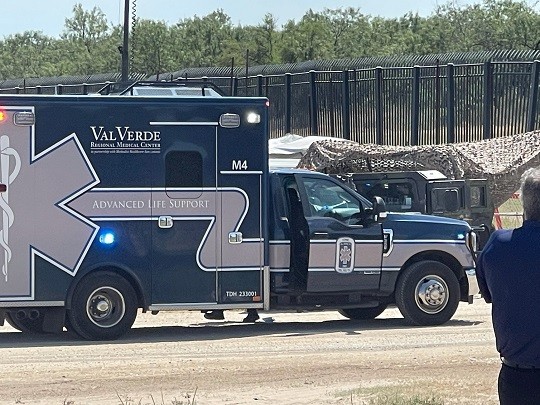 An ambulance arrived during the press conference to provide emergency medical care for a migrant woman. A second ambulance arrives as reporters left on a bus. Reports indicate three ambulances arrived in as many hours. (Photo: Randy Clark/Breitbart Texas)

“We’re alone down here dealing with a national issue,” the sheriff said about the current crisis that is underway in his county. “We feel abandoned.”

While most of the nearly 10,000 detained migrants are from Haiti, Sheriff Martinez said he spoke with a Venezuelan woman last night who said she would “rather drown here than die in her own country.” 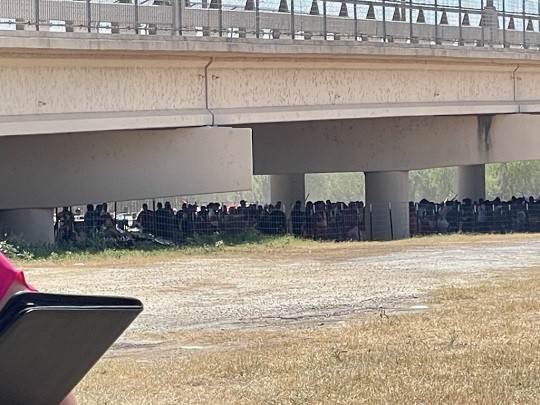 By the end of the press conference, officials said the number of detained migrants exceeded 9,500. (Photo: Randy Clark/Breitbart Texas)

As of Wednesday morning, the Biden administration held more than 4,000 migrants under the Del Rio International Bridge. By the following morning, that number soared to more than 8,000 and has surpassed 9,000 by the time this article was published.

In response to an inquiry from Breitbart Texas on Thursday morning, CBP officials said, “The Border Patrol is increasing its manpower in the Del Rio Sector and coordinating efforts within DHS and other relevant federal, state and local partners to immediately address the current level of migrant encounters and to facilitate a safe, humane and orderly process.”

Congressman Gonzales visited the camp on Thursday and relayed the following to Breitbart Texas:

I am at the southern border every week, and this is worse than anything I have ever seen. The Del Rio community and our border patrol agents are doing everything they can, but they are at a breaking point. The only way this crisis ends is with a policy change from the White House.