EAGLE PASS, Texas — Breitbart Texas observed members of the Texas National Guard launching Zodiac river boats onto the Rio Grande in support of Operation Lone Star. The soldiers on the boats conduct reconnaissance and interdiction missions along the river.

Early Monday morning, Breitbart Texas observed members of the Texas National Guard preparing to launch a pair of Zodiac river patrol boats from the Eagle Pass Boat Ramp. The Guardsmen boarded the boats and moved north along the Rio Grande toward areas where concentrations of large migrant groups are crossing the border in record numbers. 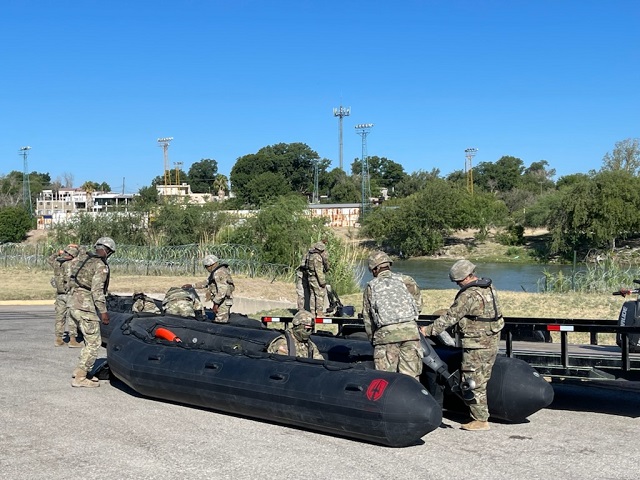 Officials with the Texas Military Department told Breitbart Texas on Monday that the Zodiacs are not new to the Texas National Guard. However, they have only recently been added to the Operation Lone Star mission put in place last year by Texas Governor Greg Abbott.

Officials say the purpose of the lightweight river boats is to “prevent, deter, and interdict” migrant crossings and other acts of illegal immigration. This includes attempts to turn back migrants preparing or attempting to cross the river.

Soldiers will use bull horns to issue orders and other directions to migrants who are preparing to cross or who are already in the water attempting to make their way to Texas, officials stated. 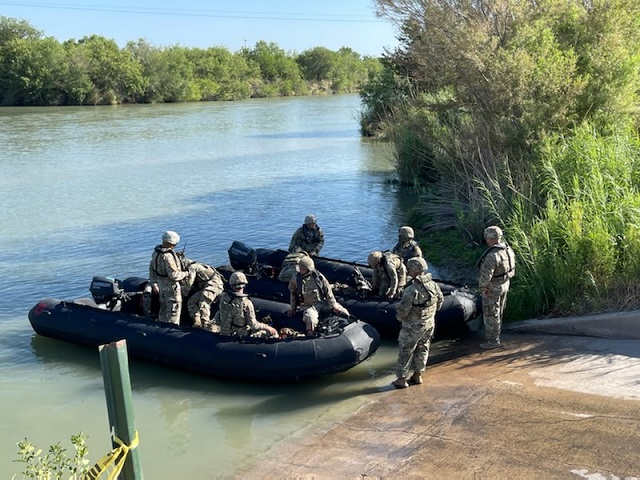 The soldiers provide additional eyes and ears to Border Patrol agents and Texas Department of Public Safety troopers attempting to secure the border.

“Water recon is crucial in our help for [law enforcement],” said Staff Sgt. Jonathan Sadikin in a statement published by Governor Abbott’s office on June 24.

Despite the best efforts of overwhelmed Border Patrol agents, Texas National Guardsmen, and DPS troopers, migrants continue entering the five Texas-based border sectors in record numbers. In May alone, Border Patrol agents apprehended nearly 138,000 migrants in the Texas-based sectors, Breitbart Texas reported. This represents approximately 32 percent of the more than 220,000 migrants apprehended by agents along the entire southwest border in May.

Once again, the Rio Grande Valley Sector led the way as the busiest sector in the country for migrant apprehensions with slightly over 45,000 migrants. The Del Rio Sector came in as a close second with more than 44,000 apprehensions. The El Paso, Laredo, and Big Bend Sectors rounded out the five Texas-based sectors with approximately 34,000, 11,500, and 2,800 apprehensions respectively.