The U.S. government awarded hundreds of work permits in 2017 to a front company that, according to an FBI statement, trafficked almost 2,000 Chinese graduates into the U.S. white-collar labor market.

The March 28 FBI document alleges that a Chinese migrant named Weiyun Huang took money to issue fraudulent claims of employment to Chinese students who were seeking to get “Optional Practical Training” work permits. Huang was arrested March 26, the document says.

The alleged white-collar job theft is also tied to national security concerns. One beneficiary of Huang’s alleged OPT fraud was arrested in late 2018 for suspected espionage via the “MAVNI” program, which recruited foreigners for the military.

The federal investigation began shortly after Huang’s California-based company, Findream, was spotlighted in a March 21 Breitbart News article, and it comes as many Senators and Representatives push a bill  — H.R.1044 and S.386 —  that would help U.S. investors outsource many more white-collar jobs via the OPT program to graduates imported from China and India.

The OPT program allows universities to earn revenues from foreign student customers by offering them work permits for up to three years in the United States for each degree earned at the university. The OPT program is attractive to foreign students and companies in part because it hurts many American graduates.

It gives companies a tax break for hiring foreigners instead of Americans, and it also encourages foreigners to accept very low wages in exchange for the promise of a huge deferred bonus from the federal government, in the form of a green card. The OPT program helps foreign workers get into the better known H-1B program, which keeps roughly one million white-collar workers in the United States and allows roughly 50,000 H-1B workers and family members to get green cards each year.

In 2017, roughly 400,000 foreigners were given work permits by the OPT program at the expense of new American graduates.

The OPT program is widely exploited by many prestigious universities and companies, including Amazon, Microsoft, Google, and many other companies. The huge program is rarely mentioned by establishment media outlets, such as the Washington Post but has been extensively covered by Breitbart News.

The government had evidence of possible Findream fraud for many months. But the Findream case was exposed to the public only when the list of OPT-hiring was posted in 2018 by the U.S. Citizenship and Immigration Services agency under a transparency initiative pushed by director Lee Francis Cissna.

The government data showed that Findream appeared as the tenth-ranked user of OPT workers in 2017, behind the familiar names of Amazon, Intel, Google, Deloitte, Facebook, and Microsoft. LinkedIn’s website shows roughly 90 people who claim to work at Findream.

There are other little-known companies in the top slots for OPT users. They include Tellon Trading and XCG Design Corp in New York. The companies have many mentions on LinkedIn and were given roughly 2,600 OPT work permits in 2016. The XCG website says:

The fast-track bust of Findream was described in the federal document:

On or about March 25, 2019, agents visited the [Findream] website and observed the following webpage:

FINDREAM IT Consulting. Let Us Do the Job.
…
When agents did a Google “reverse image search” for each of the photographic images contained under “Our Team,” on the Findream.us website, they discovered that each of the four images of the persons on the page was a “stock image,” associated with a range of miscellaneous websites. In other words, the images did not appear to be images of the persons Findream purported them to be on its website.

On or about March 25, 2019, agents visited the [twinned Chinese-langauge] website and discovered the website is predominately in the Chinese language. The following excerpts from the website www.chineselookingforjobs.com are based upon draft English translations of the Chinese writing on the website completed by interpreters employed by the FBI:

The theory behind affiliation is finding a company, become an employee, and then send the company’s information to the school, which will then enter your information to your SEVIS system. When you receive 120, [you] will see that this company is on 120. By doing so, USCIS will think your status is legal.

Chineselookingforjob.com is a branch office that mainly provides consultation to job seekers in the U.S. The company has North American job seekers in the U.S. … The goal is to help overseas Chinese find jobs after graduation. We have large Mentor networks in all major companies in the U.S. to provide suggestions and service to graduating Chinese students. In the past two years, CLFJ has helped more than 200 students with job-related issues. We will continue providing the best service to overseas Chinese in the future.

Based on the investigation of Findream to date, Findream appears to be a company on paper only, with no actual physical presence, and was created for the sole purpose of providing false verifications of employment to F-l [student] visa holders seeking to extend their stay in the US via the OPT program. 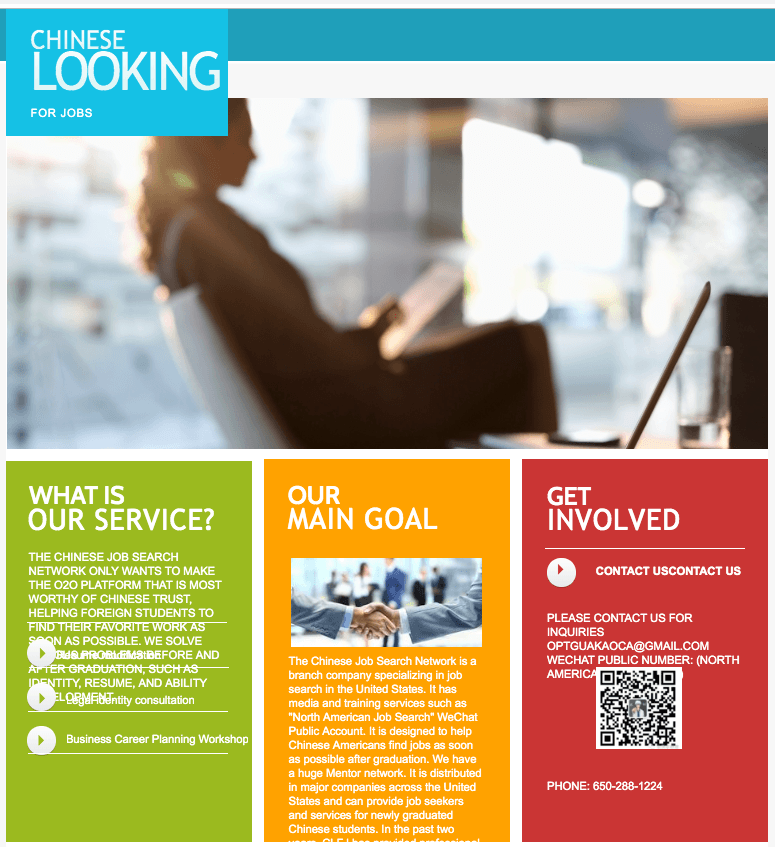 The FBI reported that Findream’s claimed founder, Huang, arrived in the United States as a student in 2009 and then got an L-2 visa to accompany her L-1 visa-worker husband:

20. According to the Department of State, on or about May 21, 2009, HUANG, was issued a 12-month F-l visa for her to study at the University of Mississippi. She was issued additional 12-month F-1 visas for her studies at the University of Mississippi through 2014. On all of HUANG’s F-l visa applications after 2010, HUANG listed kelly0710@gmail.com as her email address.

21. According to the Department of Homeland Security, on or about June 17, 2014, HUANG was issued a 24-month L-2 visa to accompany her husband during his sponsored employment in the United States.

After the document was prepared, Huang was held in detention by the federal government, according to an NBC TV station that broke the story.

Huang’s clients were Chinese, and the federal report does not say where her roughly 1,900 Chinese graduates found jobs, not how many have subsequently gotten H-1B work permits.

Indian migrants, however, tend to cluster in Indian-run software companies, corporate divisions, and trade groups. For example, Integra Technologies got almost 2,600 OPT workers in 2017, far more than Intel’s haul of 1,700 OPT graduates or Google’s 1,500 graduates, according to the USCIS data. The firm includes many Indians, according to LinkedIn reports, and is run by Indian-born Abhijeet Chakraborty.

In a statement to Breitbart News, Chakraborty said:

Firstly, this is a very old data which you are referring to and from then onwards the entire scenario got changed specially in our case.

On that particular time frame we needed to hire different skill set candidates for our various on board projects as instructed by our Business Development Managers of that time and we hired mixed bag candidates irrespective of their citizen status.

Then onwards (Probably since mid of 2018) we started to loose on the projects and faced huge monetary losses and as a result we stopped hiring because we don’t require any.

Just to let you know that Currently Integra Technologies not hiring any candidates as we don’t have any big project in hand but somehow we manage to stay in the market as a small company and fighting for our survival.

Please wish us luck so that we can come up again with some big projects where we can create job opportunity for all kind of students including American Graduates.

Many of the Indian workers use low-grade colleges to get OPT permits so they can keep working and also get into the H-1B program. In the last few months, the Department of Homeland Security revealed they had created a fake university to sting migrants, while Virginia officials announced plans to begin closing a college that provided many OPTs to paying customers. Most of the workers who used these fake colleges were Indians.

American grads lose jobs & cash to 400,000 foreign students (each year!) who get OPT work permits via their colleges. One low-grade Va. college – IOW a 'visa mill' – is facing closure for not keeping up appearances while trafficking the college-grad labor. https://t.co/QTnOYhXuQz

The population of resident white-collar foreign workers — who are not immigrants — is at least 1.5 million and is likely two million, not counting any migrants who rely on fake work permits.

That resident foreign population is far larger than the 800,000 Americans who graduate each year from colleges with skilled degrees into an increasingly sharp-elbowed job market where millions of foreign graduates will accept low wages, fake their resumes, and defraud the U.S government in the hope of staying in the United States.

DHS investigators discover Chinese fraud ring intended to get Chinese into US colleges and white-collar jobs. Tip of the iceberg. Tho job theft is usually good for biz & investors (& bad for employees) it also threatens investors via IP theft & legal risk https://t.co/LRH15vOpEu

The vast majority of the foreign workers rationally accept very low U.S. salaries in a calculated decade-long strategy to win life’s biggest prize — U.S. citizenship for themselves, their spouses, children, and descendants. Citizenship provides the right to live in the United States, to be treated as an American, and to collectively escape the poverty, crime, caste, and corruption found throughout many foreign countries.

For example, U.S. officials have reported extensive fraud by Indians throughout the H-1B program. “In the 18 months prior to the start-up of consular operations in Hyderabad, FPU Chennai investigated 150 companies in Hyderabad, 77 percent of which turned out to be fraudulent or highly suspect,” said one 2009 U.S. embassy report from India.

In August 2018, the U.S. government arrested an Indian CEO who allegedly pressured his Indian visa-worker employees in the United States to work for less than the promised wage levels, said a federal statement. Sometimes, the workers were not even given work to perform, despite federal rules which require employers to pledge the H-1B visa workers are needed for defined tasks.

“The employees were forced to pay [the CEO’s] companies a partially-refundable ‘security deposit’ of as much as $5,000 for the visa filings, regardless of whether they were assigned to any projects that provided them with income,” the statement said.

Indian managers in the United States rationally exclude young American graduates from new jobs and instead hire compliant Indian visa workers, whistleblower Jay Palmer told Breitbart. “Indians only hire Indians because they can manipulate them, exploit them, and the young workers just take it because [any job in the United States] is better than being back in a poverty-stricken nation,” he said. “They’ll work 70 to 80 hours a week … and they won’t complain.”