The nation’s immigration policies are built on a back-room corporatist bargain between Democrats and cheap-labor businesses, says an op-ed published in the New York Times.

The op-ed is headlined, “I’m a Liberal Who Thinks Immigration Must Be Restricted.” The January 16 article was authored by Jerry Kammer, a former journalist who now works with the Center for Immigration Studies:

After dinner, the group’s executive director, Frank Sharry, made a pitch to business allies who wanted Congress to allow them unfettered access to foreign workers. “You guys in business get all the workers you want, whenever you want them,” he proposed. “No bureaucracy.”

“Sold!” yelled John Gay, a lobbyist for the American Hotel and Lodging Association. Mr. Sharry quickly added that the deal must include advocacy for “three little, tiny pieces of paper: a green card, a union card and a voter registration card” for unauthorized immigrants.

The hotel industry is eager to use much imported cheap labor, partly because wages and salaries add up to roughly 50 percent of the sector’s annual costs. Any increase in labor supply and any reduction in workers’ wages helps the shareholders boost their stock values.

Sharry is now the head of America’s Voice, a pro-immigration group that works with the Democratic Party. In 2013 and 2014, he worked closely with business groups as well as ethnic and racial lobbies in a failed effort to pass the wage-cutting amnesty and cheap-labor bill. The “Gang of Eight” bill was strongly backed by the New York Times, which repeatedly described it as “comprehensive immigration reform.”

The op-ed was also denounced by Todd Schulte, the director of the FWD.us advocacy group created by billionaire investors, including Mark Zuckerberg. He used Twitter to stigmatize Americans who are worried about the impact of imported labor on their wages, housing, and children, tweeting:

Coming off Bret Stephens race-science column, The New York Times Opinion Section gives a massive amount of real estate too… The Center for Immigration Studies, funded and founded by John Tanton. John Tanton who wrote “The Case for Passive Eugenics.”

The Center for Immigration Studies, funded and founded by John Tanton.

John Tanton who wrote "The Case for Passive Eugenics."https://t.co/WdMYqLoliv

The elite effort to stigmatize criticism “works – it works like a charm,” says Kevin Lynn, the founder of Progressives for Immigration Reform. He continued:

It is thrown out as a red herring when they really don’t want to discuss the pros and cons of immigration … as a way to shut down the debate.

[The impact of migration] is self-evident when you look at California. If unbridled immigration is somehow a plus for the productive class [and] is a boon to the environment, then California should be paradise right now. But California has the highest level of inequality … The jobs that once paid a good middle-class living now don’t. You’re scraping by in your construction job.

The impact of the racism charge may even reach the editorial board at the New York Times, which has interviewed most of the Democrats’ 2020 competitors.

In interviews with Sen. Bernie Sanders (I-VT), Tom Steyer, and Sen. Elizabeth Warren (D-MA), the board members denied a connection between labor supply and wages. In a back-and-forth conversation about exploitation and immigration with Sanders, for example, board member Binyamin Applebaum said:

You said that the exploitation of undocumented workers results in lower wages for domestic workers … I think that there’s a lot of research suggesting that that’s not actually the case.

That claim that supply does not affect wages is often made by investors’ lobbyists and business-tied consultants.

But the vast majority of people who deal with the issue plainly say that worker shortages spur wage raises.

But the NYT‘s board trusts that immigration does not affect wages. In the interview with Warren, board member Kathleen Kingsbury asked: “Throughout America, many jobs that were once held by American union members have been replaced and are now held by undocumented immigrants. Does that drive down wages in the United States? … But do you know of any specific evidence that immigrants drive down wages?”

The NYT posted Kingsbury’s question with an italicized note denouncing the supply-effects-wage connection:

Over several decades, it’s become increasingly clear that how immigration debates are framed is important. One of the more subtle anti-immigration tactics — employed by the Trump, Kennedy and Johnson administrations, as well as some on the political left — is to suggest that reducing immigration could preserve more jobs for American workers and lead to higher wages, but economic research has consistently disputed the notion that limiting immigration would increase domestic employment or raise average wages. The prevailing view of economists is that immigration increases economic growth [but] while some workers might benefit from immigration restrictions, more would suffer.

The NYT‘s links go to a 2017 article that tries to contradict the 2016 National Academy of Sciences report on immigration.

Kingsbury seems to support the claim that immigration does not affect wages — even though she won a prize for writing about low wages in a sector flooded by migrant workers: “She was awarded the 2015 Pulitzer Prize for distinguished editorial writing for a series on low wages and the mistreatment of workers in the restaurant industry.”

meet Hope Shaw, the 38-year-old single mother of three who is assistant manager at Dunkin’ Donuts on Boston Street. She, too, likes to serve. But her life is one of unrequited toil. She lives paycheck to paycheck. Her heating gas was shut off last winter for failure to pay; the electric bill for her Dorchester apartment is consistently three months overdue. She’s gone without health insurance for more than a year. “My rent is $1,100 a month,” she says. “Every month I feel like I’m choosing between paying that or putting food on the table.”

Yet, six days a week, Shaw leaves her home before 4 a.m. to work a nine-hour shift overseeing the sale of donuts, bagels, and flat-bread sandwiches, while coping with customers who expect their coffee to be prepared exactly as they please and only sometimes drop a penny in the tip can. She’s been promoted twice in the five years she’s worked at the store, and her hourly pay has gone from $8 to $10. She made slightly less than $24,000 last year.

But elites have always been reluctant to admit the economic and civic distortions caused by government-imported labor, said Lynn. “They never will,” he said, citing a quote by union leader Samuel Gompers in 1924:

Every effort to enact immigration legislation must expect to meet a number of hostile forces and, in particular, two hostile forces of considerable strength. One of these is composed of corporation employers who desire to employ physical strength at the lowest possible wage and who prefer a rapidly revolving labor supply at low wages to a regular supply of American wage-earners at fair wages. The other is composed of racial groups in the United States who oppose all restrictive legislation because they want the doors left open for an influx of their countrymen

That year, Gompers won his battle when Congress drastically cut the inflow of immigrants into the United States. By 1950, American wage-earners earned roughly 65 percent of each year’s economy. But that share declined after 1980 in an increasingly high-immigration, high-tech economy. 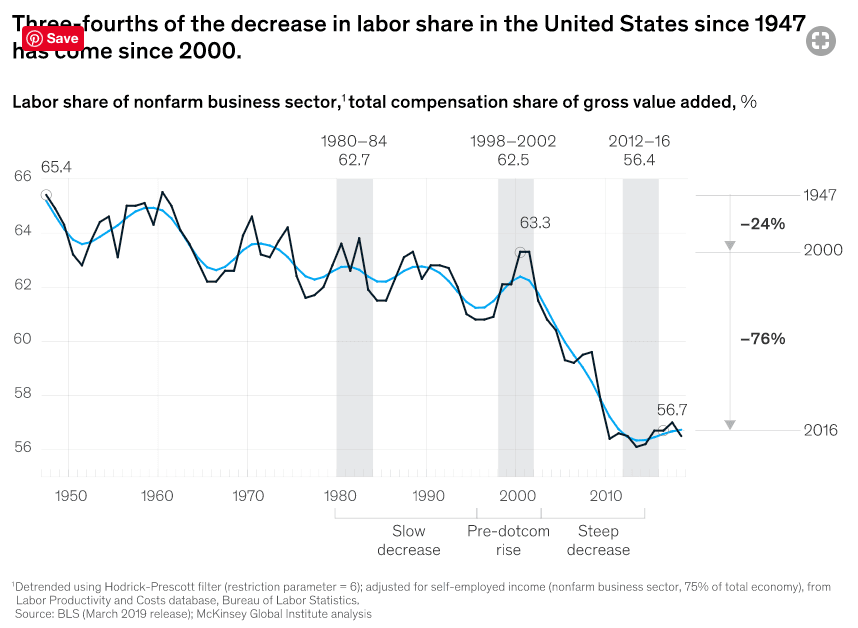 In the great recession, wage-earners’ share of new wealth fell below 57 percent as cheap labor and spreading technology flushed Americans’ money towards the stock market and the coastal cities.

The New York Times‘ editorial board denies immigration’s role in that incoming tide of wealth.