Middle-class wages in progressive California have risen by 1 percent in the last 40 years, says a study by the establishment California Budget and Policy Center.

“Earnings for California’s workers at the low end and middle of the wage scale have generally declined or stagnated for decades,” says the report, titled “California’s Workers Are Increasingly Locked Out of the State’s Prosperity.” The report continued:

The report admits that the state’s progressive economy is delivering more to investors and less to wage-earners. “Since 2001, the share of state private-sector [annual new income] that has gone to worker compensation has fallen by 5.6 percentage points — from 52.9% to 47.3%.”

The report notes that wages finally exceeded 1979 levels around 2017, and it splits the credit between the Democrats’ minimum-wage boosts and President Donald Trump’s go-go economy.

The 40 years of flat wages are partly hidden by a wave of new products and services. They include almost-free entertainment and information on the Internet, cheap imported coffee in supermarkets, and reliable, low-pollution autos in garages.

But the impact of California’s flat wages is made worse by California’s rising housing costs, the report says, even though it also ignores the rent-spiking impact of the establishment’s pro-immigration policies:

In just the last decade alone, the increase in the typical household’s rent far outpaced the rise in the typical full-time worker’s annual earnings, suggesting that working families and individuals are finding it increasingly difficult to make ends meet. In fact, the basic cost of living in many parts of the state is more than many single individuals or families can expect to earn, even if all adults are working full-time. 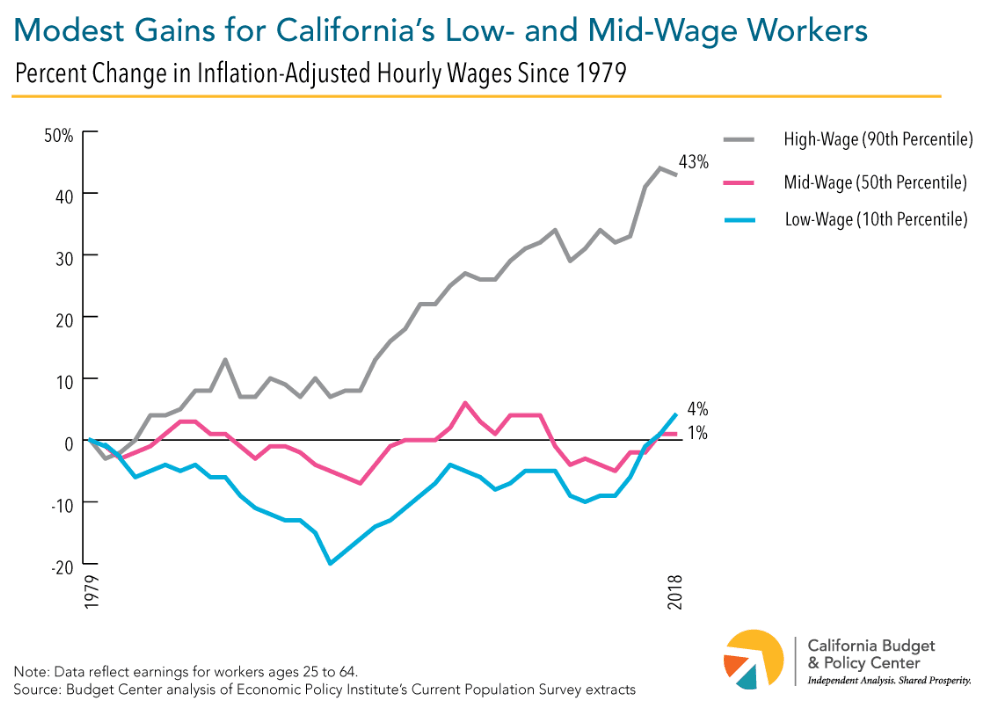 The wage and housing problems are made worse — especially for families — by the loss of employment benefits as companies and investors spike stock prices by cutting costs. The report says:

Many workers are being paid little more today than workers were in 1979 even as worker productivity has risen. Fewer employees have access to retirement plans sponsored by their employers, leaving individual workers on their own to stretch limited dollars and resources to plan how they’ll spend their later years affording the high cost of living and health care in California. And as union representation has declined, most workers today cannot negotiate collectively for better working conditions, higher pay, and benefits, such as retirement and health care, like their parents and grandparents did. On top of all this, workers who take on contingent and independent work (often referred to as “gig work”), which in many cases appears to be motivated by the need to supplement their primary job or fill gaps in their employment, are rarely granted the same rights and legal protections as traditional employees.

The center’s report tries to blame the four-decade stretch of flat wages on the declining clout of unions. But unions’ decline was impacted by the bipartisan elites’ policy of mass-migration and imposed diversity.

In 2018, Breitbart reported how Progressives for Immigration Reform interviewed Blaine Taylor, a union carpenter, about the economic impact of migration:

Now, the average wage in Los Angeles for construction workers is less than $11 an hour. They can’t go lower than the minimum wage. And much of that, if they’re not being paid by the hour at less than $11 an hour, they’re being paid per piece — per piece of plywood that’s installed, per piece of drywall that’s installed. Now, the subcontractor can circumvent paying them as an hourly wage and are now being paid by 1099, which means that no taxes are being taken out. [Emphasis added]

Diversity also damaged the unions by shredding California’s civic solidarity. In 2007, the progressive Southern Poverty Law Center posted a report with the title “Latino Gang Members in Southern California are Terrorizing and Killing Blacks.” In the same year, an op-ed in the Los Angeles Times described another murder by Latino gangs as “a manifestation of an increasingly common trend: Latino ethnic cleansing of African Americans from multiracial neighborhoods.”

Overall, median weekly earnings rose 5% from the fourth quarter of 2017 to the same quarter in 2018, according to the Bureau of Labor Statistics. For workers between the ages of 25 and 34, that increase was 7.6%.