“Folks appear to be switching jobs more frequently, and they’re getting not only a wage boost, but a stronger wage boost than in the relative past,” said Nick Bunker,  a labor economist at Indeed.com. “This is just another sign of how a stronger tighter labor market helps lower-income workers” to get higher wages, he told the Wall Street Journal.

The data was revealed by economists at the Federal Reserve Bank of New York, who reported “the rate of transitioning to a new employer for respondents with household income of less than $60,000 reached 12 percent in July 2019—the highest level this series has recorded since its start in July 2014.”

Job-switching is markedly higher for Americans earning less than $60,000, the Fed report said.

The job-switching is helping to push up American salaries. For example, the report includes a chart showing that full-time salaries reached an average of $66,936 in July 2019, up from $57,000 in July 2014.

“Wages are rising, incomes are soaring,” Trump said a September 22 speech in Houston. “In the past 12 months alone, the average worker has taken over $1,000 extra in rising wages, and over $3,000 with tax cuts and all of the other things that we’ve done.”

The gains are made possible in the tight labor market created by Trump’s combination of lower migration and higher economic growth.

The benefits of the tight labor market for workers can be observed from the following chart … [which] displays a significant upward trend in the average salary of full-time workers … this upward trend has been broad-based across age, education, and income groups …. Tight labor markets are generally characterized by increased competition among employers to attract workers.

But the report also notes a much lower rate of job switching among higher-income and older Americans:

For respondents with higher household incomes, this rate has been on a downward trend since March 2018. We observe a similar trend when we analyze the series based on age: since July 2017, employer-to-employer transitions have been rising, for the most part, among younger respondents (under age 45) and declining (toward the series low) for older respondents. 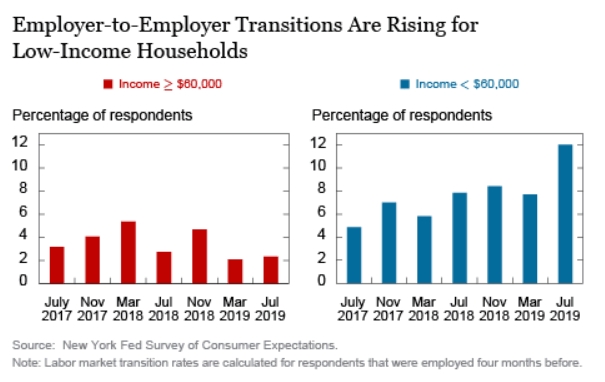 This caution by college-graduate Americans may be caused by pressure from peers and employers, — but may also be caused by the huge number of lower-wage visa-workers who are being used to cold down college salaries.

Nationwide, companies employer roughly 1.5 million foreign college-graduates in U.S. jobs. That huge number is almost twice the number of Americans who will graduate in 2091 with skilled degrees in engineering, mathematics, business, healthcare, science, software, or architecture.  Many of the foreign workers will take low salaries — and will work long hours — in the hope of being paid with green cards from their employers.

The number of foreign graduates who compete for U.S. jobs likely will sharply increase if the Senate endorses a bill by Utah GOP Sen. Mike Lee that allows employers to offer up to 120,000 visas to Indian employees per year.

The bill is being opposed by numerous groups, including the Multinational Coalition and American for Legal Immigration PAC.

DHS exposes trafficking of Indian graduates to US jobs via B1 & H-1B visas. Smuggled B1s are paid Indian wages so they help Indian CEOs grab white-collar jobs from US grads & companies. Crappy jobs for you & your kids if @SenMikeLee's @S386 becomes law. https://t.co/xfsR99hn3O

But the federal government then imports about 1.1 million legal immigrants and refreshes a resident population of about 1.5 million white-collar visa workers — including approximately 1 million H-1B workers and spouses — and about 500,000 blue-collar visa workers. The government also prints more than 1 million work permits for new foreigners, and rarely punishes companies for employing illegal migrants.

But President Donald Trump’s “Hire American” policy is boosting wages by capping immigration within a growing economy. The Census Bureau said September 10 that men who work full-time and year-round got an average earnings increase of 3.4 percent in 2018, pushing their median salaries up to $55,291. Women gained 3.3 percent in wages, to bring their median salaries to $45,097 for full time, year-round work.