Investigators with U.S. Immigration and Customs Enforcement opened about four times the number of workplace investigations in the year ended Sept. 30 compared with the close of the Obama administration, while starting fewer probes into gangs, weapons and financial crimes, according to new figures the agency provided to The Wall Street Journal.

ICE’s focus on workplace enforcement—targeting both immigrants working illegally and their employers—has intensified in the past two years. Homeland Security Investigations, the ICE arm that carries out criminal investigations, opened 6,812 new workplace cases in the 2019 fiscal year, up from 1,701 during fiscal 2016. The agency made 2,048 administrative arrests, primarily of illegal immigrants, up roughly 500 from the year before.

The ramp-up was pushed by Thomas Homan when he was the director of the U.S. Immigration and Customs Enforcement agency. “I just gave the instruction I want to increase that by four to five times,” Homan told an audience at the Heritage Foundation in October 2017.

The extra pressure on employers is nudging them to hire more Americans and to raise their pay. The Bureau of Labor Standards reported December 6 that employers hired 266,000 more people in November, and that “over the last 12 months, average hourly earnings have increased by 3.1 percent.”

Those pocketbook gains would likely be higher if GOP and Democrat legislators in Congress had not held open the border for at least 400,000 unskilled migrants throughout the first part of 2019. Congress is also allowing the legal immigration of roughly one million people per year and is allowing companies to keep an army of roughly 1.5 million foreign visa workers in the U.S. jobs that are needed by U.S. college graduates.

Business groups complain there is a shortage of workers. But the BLS reports that 164 million Americans are in the workforce, while roughly four million young Americans join the workforce each year.

Several of the Democrats’ 2020 candidates — including Bernie Sanders and Sen. Elizabeth Warren — are promising to open the border, so generating applause from the wealthy donors who bankroll much of the Democrat party. That open borders policy would dramatically increase the supply of labor and so drop Americans’ wages, once investors and employers could hire cheap young migrants instead of middle-class Americans – including older, disabled, or poorly educated Americans.

Trump’s tightening labor market is also forcing company owners to restart training programs for young Americans, according to another report in the Wall Street Journal:

Chad Ballard, 28 years old, was building swimming pools and trimming trees in Daytona Beach, Fla., when he decided to move to Hickory and then take a chance on an entry-level job at Century. Now, four evenings a week, he studies upholstery at Catawba Valley Community College in Hickory, a skill that could boost his annual pay to $45,000 within a few years and, if he can master the craft, to $75,000 or more.

Hiring Mr. Ballard was a small victory for Century, which in any given week has about 35 openings for sewers, upholsterers and other trades. “He came to us through a temporary agency,” said Amy Millsaps Guyer, vice president of human resources at the furniture maker. “We won the lottery.”

Companies are increasingly competing with each other for workers, offering early recruitment, more pay, and better training, the article said:

“The labor market is very tight in North Carolina,” said Darryl Webster, the executive in charge of Williams-Sonoma’s manufacturing operation. “I quickly realized that you need to be literally standing there before they graduate offering them a job.”

Craftmaster Furniture Inc., based in nearby Taylorsville, N.C., recently set out yard signs offering a $2,000 signing bonus for experienced seamstresses. Soon after, a friend told CEO Roy Calcagne that he had spotted the signs in a competitor’s trunk. “It’s every man for himself when it comes to hiring people,” Mr. Calcagne said.

“It’s much more difficult and longer term to get employers and managers in the company charged,” he said. Federal law requires that, to convict an employer for hiring illegal immigrants, investigators must be able to prove the employer knew about the workers’ legal status.

About a dozen agents were at 2035 Route 27, an office building located at Edison Square Office Park, a complex that is used by multiple companies. The agents were observed by NJ Advance Media coming out of an office for Larsen & Toubro Infotech, a consulting firm with multiple offices around the globe.

Four executives at an Illinois manufacturing plant have been charged with knowingly hiring illegal aliens, the Immigration and Customs Enforcement (ICE) agency reveals.

In March, officials charged a Chinese-born woman with fraudulently getting work permits for almost 2,000 Chinese:

NBC outlet shows more evidence of massive fraud in the #OPT work-permit program for 300K graduates per year.
FBI & ICE are investigating. But the investors are fighting back b/c every $1 cut from college-grad salaries creates $20 on Wall Street.https://t.co/MlkjcCNduy

Also, the Justice Department sharply increased the prosecution of border jumpers in the 12 months up to October 2019: 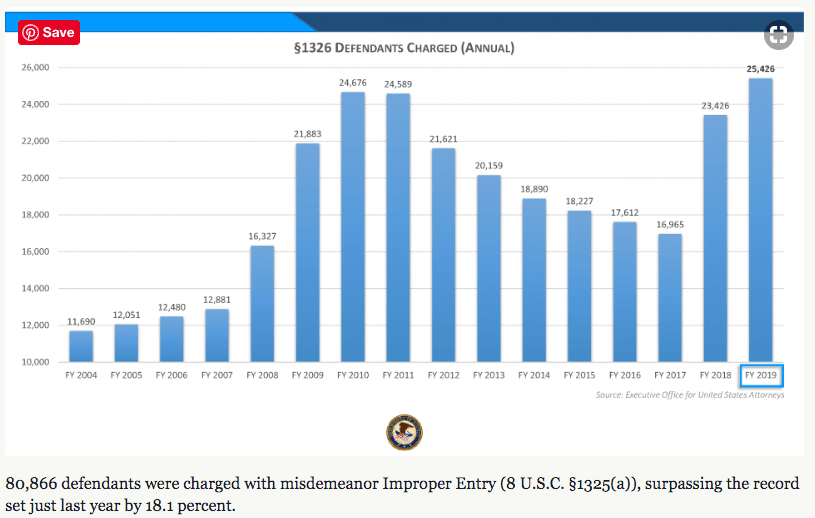 Companies and investors are reluctant to raise wages or increase training investment. Many are creating lobbying groups to push Congress to import more foreign workers: