It is an effort at making people so afraid to speak their minds that a minority of radicals can effectively intimidate a majority of common-sense Americans, and that’s often how totalitarianism functions. If you can scare people at saying things they know to be true, and then you can even deprive them of the language to express themselves — not illegal aliens, but undocumented Americans, right? Not rioters and anarchists peaceful protesters …

When you take away people’s language, and then you punish them severely and excoriate them for saying things that we all know to be true, it’s possible for a minority of people to effectively bully the majority into acquiescence. That must be fought against above virtually any other objective we have right now.

“The silent majority of Americans [must] refuse to be silent,” Miller said.

Miller spoke the day before pro-migration advocates picketed the Virginia home of Chad Wolf, the acting secretary of the Department of Homeland Defense.

One speaker at the protest outside of Sec. Chad Wolf’s home complains how there’s no financial, career, and legal consequences for people like him. Says there must be social/political consequences: “[Wolf] lives here quietly…and we need to do something about that.” pic.twitter.com/b47dUrKFrB

The Cato survey does not explain why people feel threatened, said Emily Ekins, director of polling at the Cato Institute. “We don’t know because they are afraid to tell us,” she told Breitbart News.

Black-white racial differences do not explain the trend, she said, partly because the survey shows increased concerns among Latino and black Americans, she said. 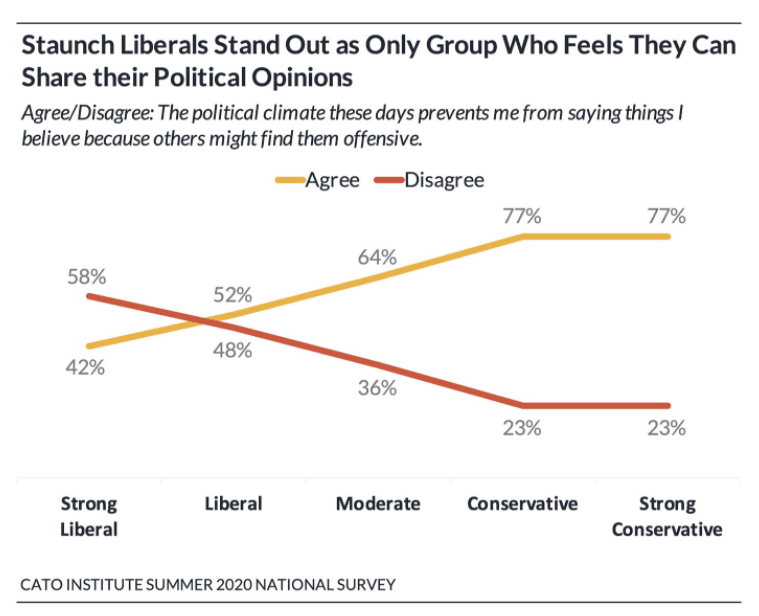 A July survey showed that cancel culture has its strongest support among liberal postgraduate men. It is most strongly supported by people who are worried about the economy, health care, or retirement, rather than about issues such as feminism, diversity, or the environment.

But Americans may be able to overcome the concerns if they recognize how many other people share their opinions, Ekins said.

Cancel culture is supported by people most worried about economics, healthcare, or retirement, says survey.
Also, post-grad liberal men are strongest supporters.
So maybe #H1B outsourcing all 1.3+ million graduate jobs is not good for civic discourse?https://t.co/4Ebw5rd2Fd