The media-magnified goal of “immigration reform” is the seventh-ranked priority among Democratic voters and among all voters, says a January 27 poll by Morning Consult for the pro-migration news site, Politico.

The January 22-25 poll of 1,990 registered voters showed that 72 percent of Democrats favor the notion of a “path to citizenship” — or amnesty — for illegals.

The poll showcases the public’s conflicting views toward migrants and migration, said Jessica Vaughan, the policy director at the Center for Immigration Studies:

For many voters, they’re well disposed toward immigrants, so when they’re asked [an amnesty] question by a pollster, they’re going to say, “Sure that sounds great.” But when it comes to making priorities for policymakers, that’s a different story. They don’t want their leaders to invest a lot of political capital or spend time doing it when they should be doing something else that’s more important, like solving the pandemic in the economy.

Most immigration pollsters ignore the voters’ views about the urgency of and alternatives to amnesty, she said. “Pollsters do miss the salience of the issue by not asking people about their priorities,” especially when the priorities are in competition with each other, she said.

The poll came out as Senate Democrats are rushing to confirm Joe Biden’s pro-amnesty nominee for the Department of Homeland Security. Most GOP Senators oppose confirmation for Alejandro Mayorkas, so Democrats must decide whether to sideline legislative priorities by scheduling 30 hours of Senate debate time to get through the formal process of debate and voting. 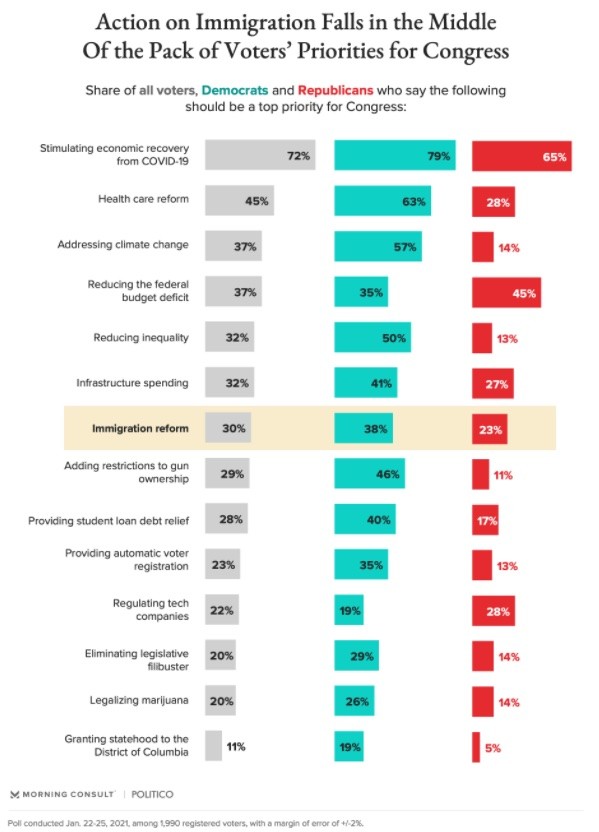 In general, progressives and their allied ethnic-identity blocs want an amnesty bill because it will raise the status of illegal migrants — and deliver more immigrant voters to the Democrats’ ballot boxes.

In general, the progressives’ allies in business want an immigration expansion bill because it will deliver more legal and illegal customers to shops and apartments, cheap workers to employers, and more profits to inflate stock values on Wall Street.

In contrast, voters want higher wages for themselves, their families, and their neighbors — and they increasingly know that immigration denied all those economic benefits to themselves and their communities.

In 2013, Democratic legislators ignored the voters and trusted business-funded pollsters. So they pushed the “Gang of Eight” amnesty through the Senate, lost five Senate seats in November 2014, and put a New York real estate developer on a path to the White House.

For years, a wide variety of pollsters have shown deep and broad opposition to labor migration — or the hiring of temporary contract workers — into the jobs sought by young U.S. graduates.

The multiracial, cross-sex, nonracist, class-based, and solidarity-themed opposition to labor migration coexists with generally favorable personal feelings toward legal immigrants and toward immigration in theory — despite the media magnification of many skewed polls and articles that still push the 1950’s “Nation of Immigrants” claim.