Progressives and employers encouraged many low-skilled foreigners to migrate illegally into U.S. cities, and now those migrants are being hit hard by China’s coronavirus because their low wages force them to live in dense, close-packed communities.

“We have have been officially declared as having the worst outbreak of Covid-19 case in the entire state,” Chelsea City Councilor Judith Garcia told Rebel Radio April 10. “A lot of the folks are undocumented,” she said:

We are a 1.8 mile-square city [in Boston]. We’re the second to third densest city in the state … We have working families that are living in apartments with up to sometimes 15 people in a three-bedroom apartment. On top of that, we have families that in the best economic times have two to three jobs just to make ends meet. A lot of those jobs are … virtually gone …

Our rates of infection are higher than in New York City … It is horrible storm and we need as much help as we can.

Local officials are not fining people who do not stay at home because the residents “barely have money to afford groceries,” Garcia said. Some people who have the disease are excluded from their cramped apartments and are made homeless, she said.

In Chelsea, the United Way has allied with local employers to create a charitable fund, which is titled the One Chelsea Fund:

Chelsea is home to some of the most vulnerable groups in the Boston region: newly-arrived immigrants, undocumented families, non-English speakers, and low-income workers and families with children … COVID-19 has magnified the challenges our community has long been struggling with: unstable and unaffordable housing, food insecurity, low wages, lack of English proficiency, and high rates of uninsured.

“A lot of business owners here have donated money to that cause … We will be distributing $250 for needy families,” said Garcia. 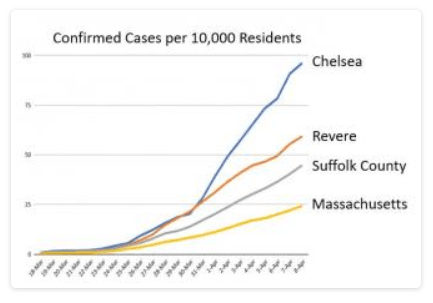 Some media outlets have noted the importance of migration and poverty amid the epidemic.

“This spring, the fast-spreading virus collided disastrously with the city’s overcrowded housing,” said an April 25 report in the New York Times:

Chelsea, a city of 40,000 people crammed into less than two square miles, has 1,447 confirmed cases, according to state data, by far the highest rate in Massachusetts.

And those confirmed cases represent only the tip of an iceberg. Last weekend, when researchers from Massachusetts General Hospital conducted antibodies tests on 200 apparently healthy pedestrians in Chelsea, selected at random, nearly a third of them tested positive, suggesting that many had been infected without knowing it.

Katharine Robb, a researcher at the Harvard Kennedy School who spent a summer following housing inspectors in Chelsea, was stunned by what she found — families living on porches, in unfinished basements or even closets, without access to running water, heat or sanitation.

The disease spreads rapidly through the poor tenements, said the NYT. “Marisol Lima, 35, was eight days from her move-out date, in the tiny room she rented from a Colombian family, when she noticed that her downstairs neighbor was coughing. Within days, six of the seven people in the apartment were seriously ill, feverish, breathing with difficulty.”

The housing and health situation similar to the scenes in New York during the 1840s and 1950s when hundreds of thousands of migrant Irish flooded into tenements wracked by disease and crime.

In the United States, “we’re learning that the closer people live and work together, the more threatening and deadly the disease can be,” said an Apri l27 New York Times article by two medical researchers:

Models we created at PolicyLab at Children’s Hospital of Philadelphia and the University of Pennsylvania, tracking and forecasting outbreaks in 211 counties in 46 states, as well as in the District of Columbia, revealed that crowding and population density, whether in densely populated areas in New York City or a meatpacking plant in South Dakota, are the most important factor in determining the havoc the virus can wreak.

Many of the nation’s crowded and noisy meatpacking plants serve as incubation centers for the disease, so infecting the many migrant low-wage workers that were hired by companies, instead of hiring well-paid Americans armed with meat-cutting robots.

But progressives — like business lobbyists — carefully dodged their own cheerleading as foreign migrants moved into the poor communities now being hammered by the disease.

Many of our residents are at risk due to their work. They are working in essential sectors (food establishments) and engaged with high levels of public interaction (healthcare, personal services). Most cannot “work from home”.

We are a dense city with many people living together. It is not easy for our residents to “isolate” themselves under these circumstances.

Progressive reporters mostly hide the immigration issue by diverting coverage to race, away from economics and migration’s impact on wages and housing costs.

Talking Points Memo hid the illegal migrant problem by describing the illegals as “immigrants” as if they were legal immigrants:

On April 7, the Boston Globe obscured the migration issue by describing language groups:

The state’s two largest community health centers, in East Boston and Lawrence, have encountered a disproportionately large surge of coronavirus cases among Spanish-speakers. Among COIVD-19 patients at Massachusetts General Hospital are four times more Latinos than are typically patients at the hospital. Boston has what appear to be high concentrations of infection in neighborhoods home to large Black, Latino, and immigrant communities in Hyde Park, Mattapan, and East Boston.

On April 24, Gene Sperling, who served as a top economic advisor to President Barack Obama, simply ignored the wage-cutting, poverty-creating impact of legal and illegal immigration when he wrote an op-ed in the New York Times urging greater power for progressives:

Fifty-two years ago, when the Rev. Dr. Martin Luther King Jr. famously asserted the dignity of all work, he seemed to foresee this moment when it would become so clear that the labor of everyone — farmworkers, grocers, delivery drivers, caregivers, nursing assistants — was essential to all of our health and well-being.

Today, we are forced to confront the dissonance between our nation’s labeling of workers as “essential” and “heroes” and their limited wages, benefits and ability to organize.
…

While we are now rightly focused on what will end this crisis as quickly as possible, we face a longer-term question. Will we wash our hands of any obligation to those who serve our nation, as we shamefully did when black soldiers helping to save our democracy returned from the world wars? Or will we seize the moment to compel a true commitment to economic dignity for all.

But the same commingled problem of migration, poverty, housing, and disease is seen worldwide, regardless of nationality, race, or ethnic origin.

In Singapore, “Over 80% of the country’s COVID-19 cases are migrant workers living in dormitories,” according to a  post titled.  “We, the citizens:”

On April 9, two blocks in the 10-block complex were gazetted by the government under the Infectious Diseases Act as an “isolation area”; the remaining eight blocks were gazetted the following day.

Two days after the initial lockdown order, men in surgical masks stood at the main gate, blocking unauthorised entry. But even from the outside, I could hear, and feel, a faint hum in the air — the hum of about 24,000 men shut in with nothing to do.

Lacking basic rights and marooned in unfamiliar places, migrant workers are usually the first in the labor force to be hit by an economic downturn. Now, as the coronavirus disease, Covid-19, spreads across the globe, migrant workers are not only victims but vectors, too, taking the epidemic to villages ill-equipped to deal with a health crisis.

Pro-migration groups say DACA amnesty should be saved because 27K DACA migrants work in healthcare.
But only 200 are doctors, many are home-care aides. So the 700K DACAs undermine the pro-DACA claim by consuming more healthcare resources than they produce?https://t.co/YEBA3CWGlQ