Reports show that wholesale used car prices climbed to an all-time high in September even though dealership inventories have historically low inventory given the high demand for second-hand cars in the supply chain.

The Manheim U.S. Used Vehicle Value Index showed that the month-over-month in September increased by 5.3 percent in September, which is the highest rise since April. Over the last year, the index increased by 27.1 percent to 204.8.

Manheim reported that “Over the full four weeks in the month, the Three-Year-Old Index increased a net 4.6 percent,” noting that the market prices were ahead of the Manheim values.

The report also showed that all major markets saw seasonal “adjusted price increases” for September in the year-over-year look. Vans and sport utility vehicles had the most, and no segments saw any amount of decline. 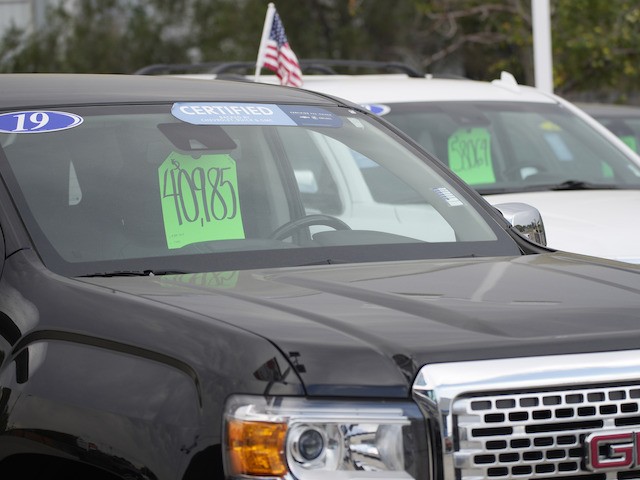 The price for a used 2019 GMC pickup truck is displayed in the windshield of the vehicle as it sits on the nearly-empty empty storage lot outside a Chevrolet dealership on August 29, 2021, in Englewood, Colorado. (AP Photo/David Zalubowski)

A report by ZeroHeadge showed that Goldman Sachs told clients that dealership inventories are down from what was already low levels historically.

“It will take time for inventory at dealers to return to normalized levels given the strong demand for vehicles coupled with ongoing supply chain challenges (particularly with semiconductor chip shortages, but also due to shipping constraints),” ZeroHeadge said.

“Dealerships have been forced to purchase second-hand cars to replenish inventory due to shortages of new vehicles. This in itself will also keep used car prices higher,” another ZeroHeadge report indicated.