Claim: Transportation Secretary Pete Buttigieg sought to put a positive spin on inflation on Sunday by pointing out that retail sales were up a lot in September and record high imports of goods were responsible for stressed supply chains.

A big part of that gain was simply consumers paying higher prices. Real sales, adjusted for inflation, were unimpressive.

“Demand is off the charts,” Buttigieg said on CNN’s “State of the Union” program. “Retail sales are through the roof. … Now the issue is, even though our ports are handling more than they ever have — record amounts of goods coming through — our supply chains can’t keep up.”

U.S. retail sales rose 0.7 percent last month. Compared with a year ago, sales were up 13.9 percent.

But the Producer Price Index for final demand was up 8.3 percent year over year and the index for goods, which make up the bulk of retail sales, rose 1.5 percent on a monthly basis. The Consumer Price Index rose 5.4 percent, with core goods prices rising 0.6 percent on a monthly basis. Measured against these metrics, sales were flat to down in September.

Imports are up sharply compared with a year ago, when they were depressed by lockdowns in the U.S. and China, but they are not up by much compared with the prepandemic. In the second quarter, imports were up by just 1.8 percent compared with the April through June period in 2019. That’s a pretty meager growth, a full percentage point below the pace of import growth between 2018 and 2019. 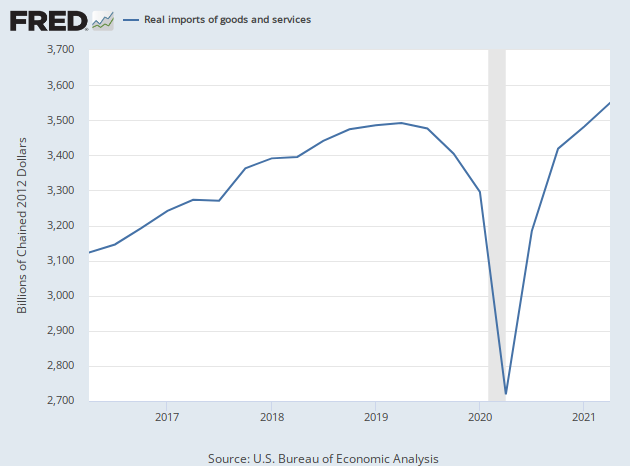 What’s more, a big part of the September boost was likely due to consumers starting holiday shopping earlier than usual due to widely reported supply shortages.  That could mean that sales will be lower than expected during the traditional, post-Thanksgiving shopping season.

Last week, the University of Michigan’s Consumer Sentiment Index plunged back to levels not seen since the initial outbreak of Covid-19 last year.

“The Delta variant, supply chain shortages, and reduced labor force participation rates will continue to dim the pace of consumer spending into 2022,” economist Richard Curtin, who oversees the survey, said.