A ship transporting about 4000 vehicles — including roughly 1,100 Porches and 189 Bentleys — across the Atlantic to the U.S. has been abandoned at sea and left ablaze.

The fire broke out Wednesday while the 650-foot vessel, the Felicity Ace, was off the coast of the Azores archipelago in the mid-Atlantic, the Associated Press reports.

Captain Joao Mendes Cabeças of the port of Hortas told Reuters that special equipment is needed to extinguish the blaze as lithium-ion car batteries in electric cars on board have caught fire. It is unclear whether the batteries caused the fire or if they were lit ablaze after something else caught fire, Cabeças said. The ship will either be towed to the Bahamas or to a European country.

A spokesperson for the Portuguese Navy said 22 crew members were aboard during the fire, and all were successfully evacuated without injury, per Reuters.

“The ship is burning from one end to the other… everything is on fire about five meters above the water line,” said Cabeças. 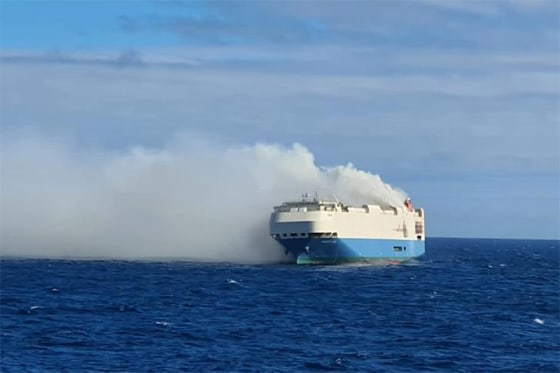 The Felicity Ace car carrier on fire approximately 90 miles from the island of Faial, Azores, on Feb 17, 2022. (Portuguese Navy)

He told Reuters that towboats from the Netherlands and Gibraltar are en route to the scene, three of which are expected to arrive by Wednesday. Cabeças added that the Felicity Ace could not be towed to the Azores, as it would halt trade at the port due to its massive size.

Smit Salvage, owned by Boskalis — a Dutch marine engineer company — has sent a 16 person salvage team to the scene to help manage the blaze, according to Reuters.

The outlet reports the ship carrying 4,000 vehicles departed from Germany and was bound for Rhode Island:

The Panama-flagged ship, owned by Snowscape Car Carriers SA and managed by Mitsui O.S.K. Lines Ltd, was travelling from Emden, Germany – where Volkswagen has a factory – to Davisville in the United States, based on the Maritime Traffic website.

Around 1,100 Porsches and 189 Bentleys were on board, spokespeople for the car brands said. Audi, another Volkswagen (VOWG_p.DE) brand, confirmed some of its vehicles were also on the ship but did not state how many.

Volkswagon did not specify how many of its vehicles were onboard and stated it was waiting for additional information.

Youtuber Matt Farah, co-host of the Smoking Tire YouTube channel, tweeted that he had a Porsche “Boxster Spyder with Deman 4.5 motor and shorty gears” on board.

I just got the call from my dealer. My car is now adrift, possibly on fire, in the middle of the ocean. https://t.co/Ge2DYk8IJ0

The Boxster Spyder with Deman 4.5 motor and shorty gears is the best sports car of all time, hands down. I had it specced exactly as I wanted it. There is no moving on. https://t.co/egaYJV5VEC

Farah noted he had been waiting for the car for eight months in another tweet, adding that his dealer said he would keep him updated on Porsche’s plans to remedy the situation.