Almost 20 million American native-born men have been shoved out of the labor force and onto the economic sidelines of their own homeland, as Democrats and business groups demand even more imported foreign workers.

“The reality is there’s a huge pool of potential [American] workers for employers,” even if the unemployment rate falls to zero, said Steven Camarota, director of research at the Center for Immigration Studies.

The huge and growing population of discarded Americans rarely gets attention in Washington D.C. — especially by the pro-migration lobbies funded by businesses and progressives.

On Tuesday, March 15, for example, Sen. Alex Padilla (D-CA) will hold a hearing to “examine the challenges immigrants face in seeking lawful permanent resident status, and the need to overhaul and modernize the legal immigration system to preserve family unity and grow our economy.” The three scheduled witnesses all favor migration: An Indian graduate of the University of Texas at Austin, Athulya Rajakumar, and two immigration lawyers — Stephen Legomsky and Lynden Melmed.

“To the extent that this massive [sidelining of Americans] reflects social problems, then bringing in more immigrants lets us ignore the social problems — whether it’s the obesity and disability crisis, the opioid epidemic, crime, all of those things that are contributing to this problem,” Camarota told Breitbart News.

“What immigration does is let you just ignore it,” he added.

Padilla’s witness panel does not include Déjà Thomas, the California-based author of a new survey of 2,000 black respondents in immigrant-heavy southern California. The survey shows that California’s high-migration/low-wage economy has sidelined almost 70 percent of Californian black workers who lost their jobs in the pandemic.

“Black workers in times of crisis, in times of economic recessions and downturns, are oftentimes the first to be let go from work, and then the last to be hired back,” Thomas told Business Insider.

“We see the symptoms of the Black jobs crisis every day: bad jobs, forced migration, unsafe and discriminatory workplace practices, occupational displacement, and more,”  said the report by the Center for the Advancement of Racial Equity at Work, at the University of California at Los Angeles. The report continues:

As previously discussed, forced migration and displacement of Black communities in Southern California has been going on for decades. The “Black Flight” terminology often used to describe it maliciously mis-characterizes the [black] reality of forced migration and displacement, due in part to job insecurity and the speculative housing market increasing costs. According to the findings above, places like the Inland Empire and San Diego have fewer social and community safety nets for Black workers, as well as limited employment opportunities.

The report noted: “60% of [survey] participants reported a 2020 personal income of under $50,000, which includes those who remained employed.”

Camarota’s federal data show that roughly 6.3 million American black men and women aged 18 to 64 have been sidelined from participation in the labor force.

Sidelined Americans are not counted as part of the labor force, which consists of employed people with jobs and unemployed people looking for jobs, said Camarota. But the numbers can be calculated from the official estimate of the “Labor Participation Rate” and those numbers are rising, he explained.

The numbers are getting worse as the federal government imports more foreign workers, he said.

During the same period, the number of working-age immigrants rose by nine million, from 18.4 million to 27.6 million, even as many manufacturing jobs were exported to Mexico and China.

Some employers favor legal immigrants and illegal migrants because they are often younger, healthier, hardworking — and very compliant.

Forty-three percent of the 45 million sidelined Americans are men, revealing a sidelined population of 19.3 million men — not including jailed men, he said.

“They sleep on their parents’ couch or their mother’s basement or mooch off of a girlfriend. A lot of them are on disability, some of them engage in illicit activity,” he said.

The government could pressure companies to hire some of the sidelined men, although many will never work again, he said, adding:

We are not going to get everybody out of the labor force back in, but there are clearly millions who have worked and could work again. You have to think of this as a continuum. My [relative] has a boyfriend, his son is an alcoholic, and he’s 59. He hasn’t worked in years — he’s dependent on his in-laws and his wife. That guy is never going to work again. However, [I know] a 22-year-old, just out of community college, just hanging out at his home and doing nothing. But he actually used to work pretty well over at the local Shoppers Food Warehouse. Could he be drawn back into the labor force? Absolutely. That’s the continuum.

Updated decompositions of the 1.5 percentage point decline in the labor force participation rate since February 2020 (nearly half due to "other," I suspect the fallout from COVID). pic.twitter.com/8HmraiJLO5

In 2000, the Labor Participation Rate for native-born Americans was 77.3 percent. By 2010, it had dropped to 73.1 percent, although almost 10 percent of the unemployed had lost work because the federally-aided housing bubble had burst in 2008.

The labor rate slid down to 72.8 percent in 2016, a loss of almost 1 percentage point over President Barack Obama’s eight years.

Yet the native-born labor rate climbed by 1.3 percentage points to 74.1 percent after three years of President Donald Trump’s lower-immigration policies. That gain brought two million Americans off the sidelines and back into mainstream American life.

Amid the 2020 coronavirus crash, the rate dropped 1.5 percentage points, back down to 72.6 percent.

Under President Joe Biden, the rate climbed by a 0.6 percentage point in 2021, fueled by heavy spending and the arrival of the coronavirus vaccine days after the 2020 election. 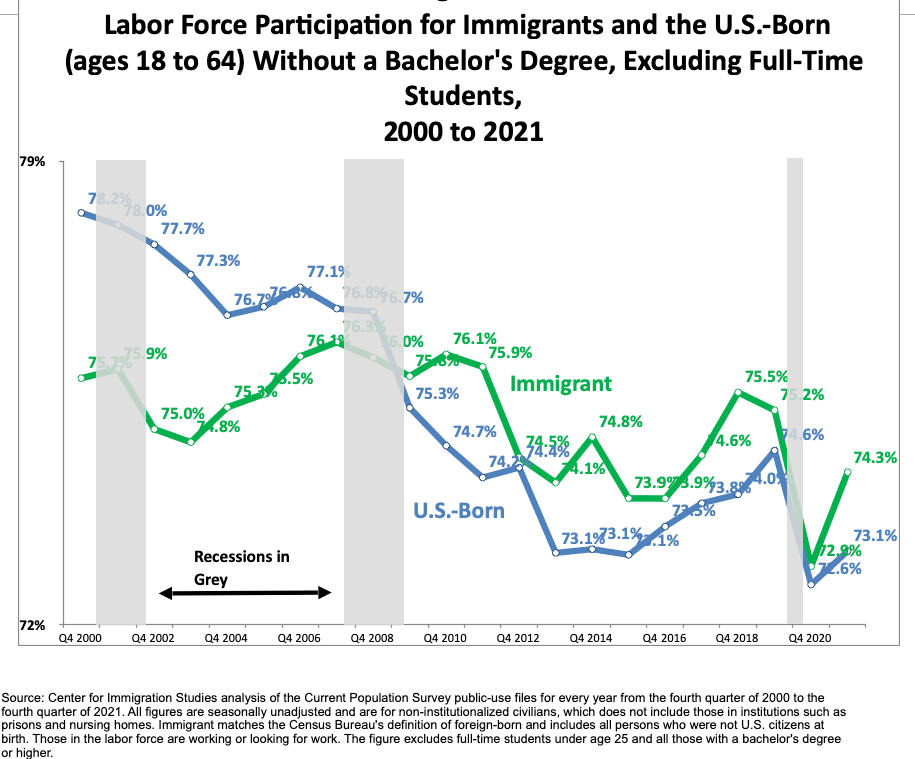 Most progressives do not care about the sidelined native-born Americans, Camarota explained: “It reflects progressive ideology about very generous welfare and a completely permissive immigration system.”

The uncaring perspective is “coupled with the business community’s desire for more and more cheap labor, and indifference to the crowding-out of American workers,” he added.

But if the government tried, “within a decade, we could get it back to what it was in 2007,” at 75 percentage points, putting more than 2 million Americans back to work, Camarota predicted.

The federal government does little about the problem, even though taxpayers must pay the welfare, crime, and civic costs of the “dislocated American workers,” he said.

I interviewed hundreds of "homeless" people for San Fransicko using the same methods I used during 33 years of interviewing people in war zones. I'm friendly, respectful, and direct

Since at least 1990, the D.C. establishment has used a wide variety of excuses and explanations to justify its policy of extracting tens of millions of migrants and visa workers from poor countries to serve as workers, consumers, and renters for various U.S. investors and CEOs.

Pro-migration groups claim the immigrants must be accepted because the United States is a “Nation of Immigrants,” or a “Nation of Welcome.” They argue that the migrants must be rescued from crime, war, racism, political persecution, sexism, or poverty; must be reunited with their parents or their children; and are needed by employers in Silicon Valley, agriculture, nursing homes, or restaurants. The advocates also argue that migrants are needed because Americans are too lazy to do the needed work, because cheap migrant labor cuts inflation, because migrants create jobs for Americans, and even because Americans deported the migrants.

The self-serving economic strategy of extraction migration has no stopping point, and it is harmful to ordinary Americans because it cuts their career opportunities and their wages while also raising their housing costs.

An economy built on extraction migration also radicalizes Americans’ democratic, compromise-promoting civic culture and allows wealthy elites to ignore despairing Americans at the bottom of society. Migration is also backed by university progressives who desire to manage the chaos of a diverse society rather than be sidelined forever by cooperating citizens in a stable republic.

Not surprisingly, the wealth-shifting extraction migration policy is very unpopular, according to a wide variety of polls.

The polls show deep and broad public opposition to labor migration and the inflow of temporary contract workers into jobs sought by young U.S. graduates.

The opposition is growing, anti-establishment, multiracial, cross-sex, non-racist, class-based, bipartisan, rational, persistent, and recognizes the solidarity that Americans owe to one another.