The Biden White House announced on Monday that Russia defaulted on its international bonds for the first time in over a century, ostensibly because the pressure of international sanctions is crushing the Russian government financially.

The Kremlin rejected these assertions, insisting it made its payments on time, but European processors blocked them, so the artificially-engineered default is not an indication of Russian financial weakness.

“This morning’s news around the finding of Russia’s default, for the first time in more than a century, situates just how strong the actions are that the U.S., along with allies and partners, have taken, as well as how dramatic the impact has been on Russia’s economy,” a U.S. official told reporters at the G7 meeting in Germany on Monday.

Russia has a good deal of money in the bank, thanks to soaring oil revenues, but its banks cannot transfer the funds to creditors because the U.S. Treasury Department Office of Foreign Assets Control (OFAC) and European financial services companies are preventing it.

The 30-day grace periods on two foreign bonds – one in U.S. dollars, the other in euros – expired on Sunday, leaving Russia in technical default. Several bondholders reported they did not receive their payments on schedule on Monday.

Kremlin spokesman Dmitry Peskov told reporters on Monday that “statements of a default are absolutely unjustified.”

“The fact that Euroclear withheld this money and did not bring it to the recipients is not our problem. There are absolutely no grounds to call such a situation a default,” Peskov insisted, referring to a European financial company.

Peskov said Russia’s bond payments have been blocked “unlawfully” and warned any attempt to confiscate those payments would “amount to outright theft.” Western officials have floated the idea of seizing frozen Russian funds and using them to rebuild Ukraine after the conclusion of the war.

The Russian Finance Ministry added that “actions of foreign financial intermediaries” are beyond its control.

“The non-receipt of money by investors did not occur because of lack of payment but due to the third party actions and which is not directly spelled out as a default situation by issue documentation,” the Finance Ministry said.

Financial analysts told the Associated Press on Monday that Russia has been “effectively in default for months in the eyes of bond investors.” It has been cut off from Western capital markets, its credit rating has already sunk into junk-bond territory, and Ukraine war sanctions are thwarting all the methods that investors would normally employ to reach a settlement after a default, so it may not have much of an immediate practical effect.

However, in the long term, the “legacy of default” might be difficult for Moscow to shake, and it could make global debt markets even more jittery than they already were.

“It’s a very, very rare thing, where a government that otherwise has the means is forced by an external government into default. It’s going to be one of the big watershed defaults in history,” senior analyst Hassan Malik of Loomis Sayles & Co. LP told Bloomberg News.

“Is it a justifiable excuse to say: ‘Oh well, the sanctions prevented me from making the payments, so it’s not my fault?’ The broader issue is that the sanctions were themselves a response to an action on the part of the sovereign entity, and I think history will judge this in the latter light,” Malik said of the Kremlin’s spin on the situation.

Russia’s previous debt default in 1918 occurred when Vladimir Lenin and his Communist revolutionaries repudiated the enormous debts of the Czarist government they overthrew – a sum that was close to a trillion of today’s dollars, making it the largest sovereign debt default in history. 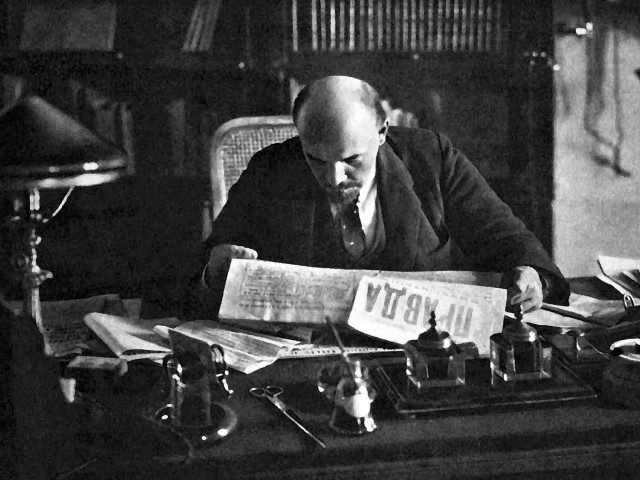 Vladimir Ilyich Lenin, (1870 – 1924) reads at the desk in his study at the Kremlin in Moscow, Russia, October 16, 1918. (Pictures From History/Universal Images Group via Getty Images)