An extreme activist group in Albemarle County, Virginia, requested a “call to action” targeting citizens who spoke against Critical Race Theory (CRT) at a County school board meeting, telling its supporters to confront them, labeling the individuals “dangerous to our children.”

In a June 10 Facebook post, the Hate-Free Schools Coalition of Albemarle County (HFSC) posted the call to action, saying “these are your neighbors, friends, and family.” The message describes the controversial curriculum as “anti-racism and LQBTQIA+ [sic] inclusive,” avoiding the more problematic label of Critical Race Theory. After publishing the list of names and their respective districts, the organization warns: “Make no mistake that individuals who hold these beliefs are dangerous to our children. Dangerous to all children but in particular LGBTQIA+ and BIPOC children.” The post encourages its audience to communicate with the people on the list, by phone or in person, and try to change their minds. “Racists can’t hide,” it concludes.

Breitbart News has edited the screenshot below to protect the named individuals’ identities: 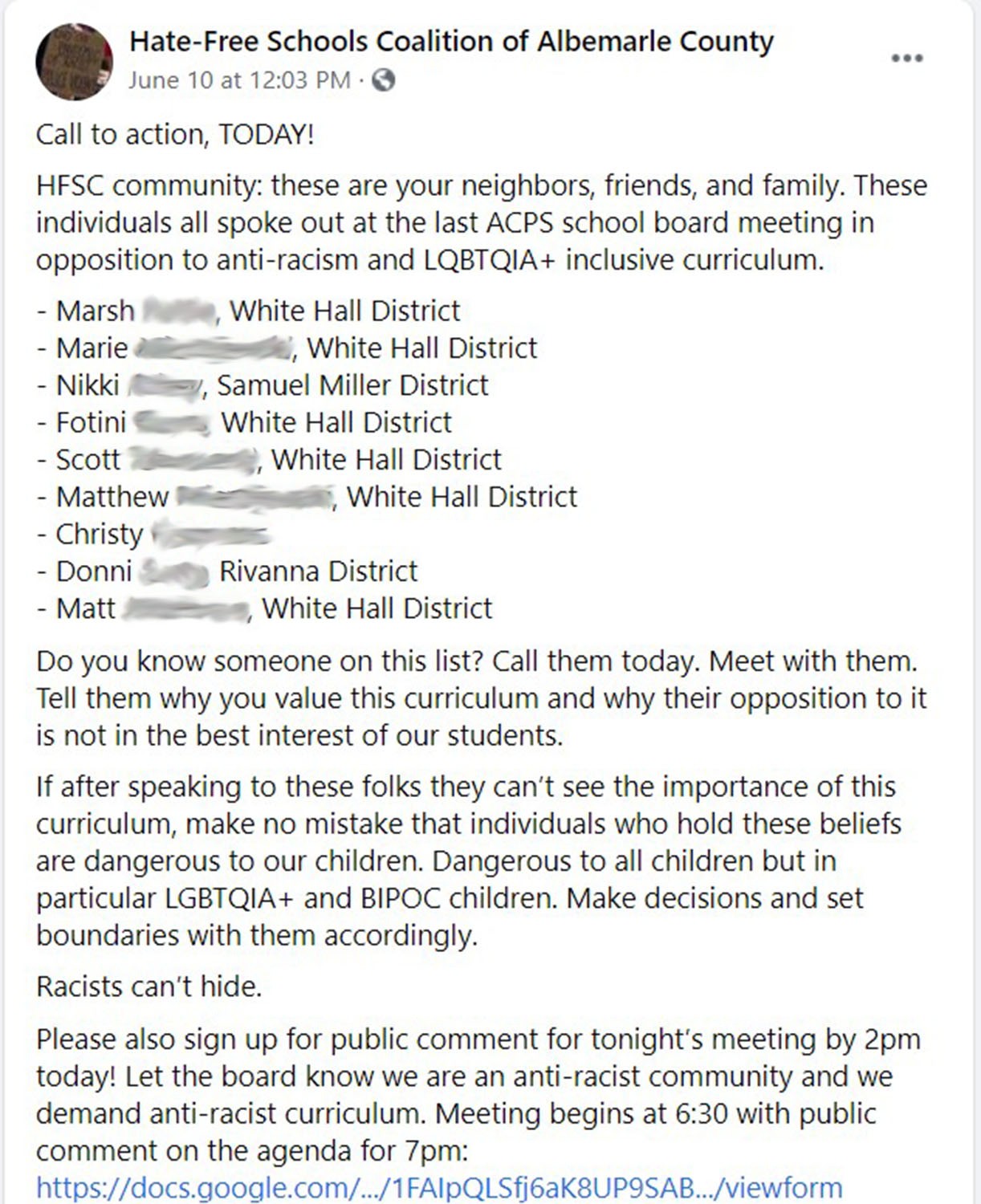 Facebook post of Hate-Free Schools Coalition of Albemarle County calling on its supporters to confront specific persons who spoke against CRT. (Screenshot via Facebook). [Blur added].

A grassroots movement against CRT has come underway in Albemarle County, leaving many pro-CRT groups fearful about the ideology’s future propagation in public schools. As Breitbart News previously reported, “As ACPS’s radical policies gain ground, concerned parents have been attempting to opt their children out of courses that they believe are ‘fundamentally racist,’ and, in the case of gender theory, ‘should be left up to parents to teach their kids.'”

Indeed, one concerned parent described the destructiveness of the ideology, citing her son’s experience:

But we are realizing that his school is pointing out the skin color differences amongst him and his friend. And in doing so, perhaps risks planting an idea in his non-racist, 12-year-old brain that he is somehow more privileged and dominant because of his white skin. And perhaps this is causing the exact harm that we as a school, a community, and a nation should be trying to prevent.

What good comes from making a child feel ashamed of who they are – or might be?

In an earlier Facebook post, the group lobbed even more extreme attacks on those opposed to CRT, while simultaneously attempting to assail Breitbart News’s original exposé of Albemarle County Public Schools’ (ACPS) racial indoctrination curricula. In part, HFSC stated that the “parents are threatening legal action and seek to deny that gender identity exists and are putting our children’s lives at risk by taking this stance and pushing it to this level of exposure, perpetuating harmful attacks against our community.” (emphasis added). 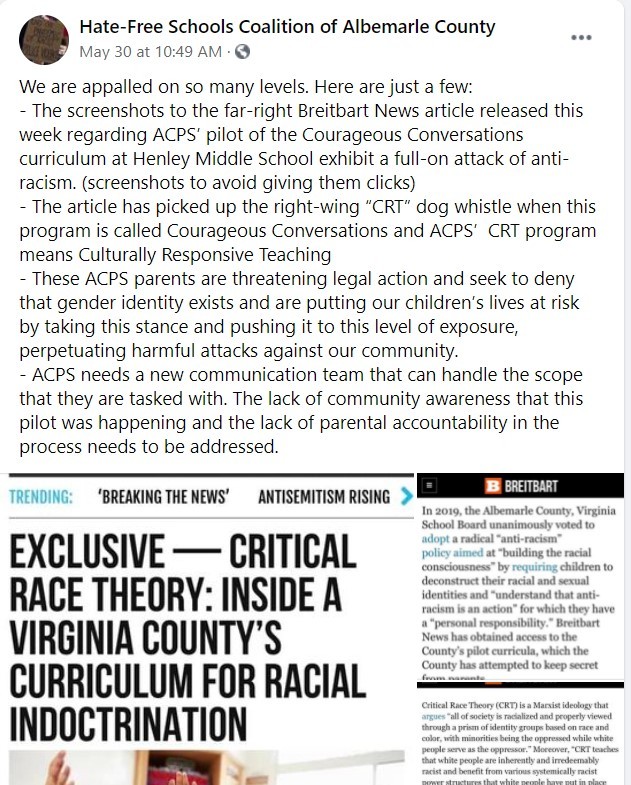 The group also attempted to distance itself from the ideology behind the curricula, Critical Race Theory, by saying that Breitbart News “picked up the right-wing ‘CRT’ dog whistle when this program is called Courageous Conversations and ACPS’ CRT program means Culturally Responsive Teaching.” However, as Breitbart News previously reported:

Indeed, critical race theorists are “masters of language construction,” and it appears that the dogmatic push to use “CRT” as the acronym for “culturally responsive teaching” is simply a way to disassociate the curricula from its ideological foundations once they became a political liability to its implementation.

HFSC holds, and lobbies and protests for, other extreme policy positions. Indeed, the group calls for the removal of Student Resource Officers in schools, arguing that the police officers tasked with maintaining the safety of all persons in the school, students and staff, are “perpetuating the school-to-prison pipeline and other racist infrastructures.” 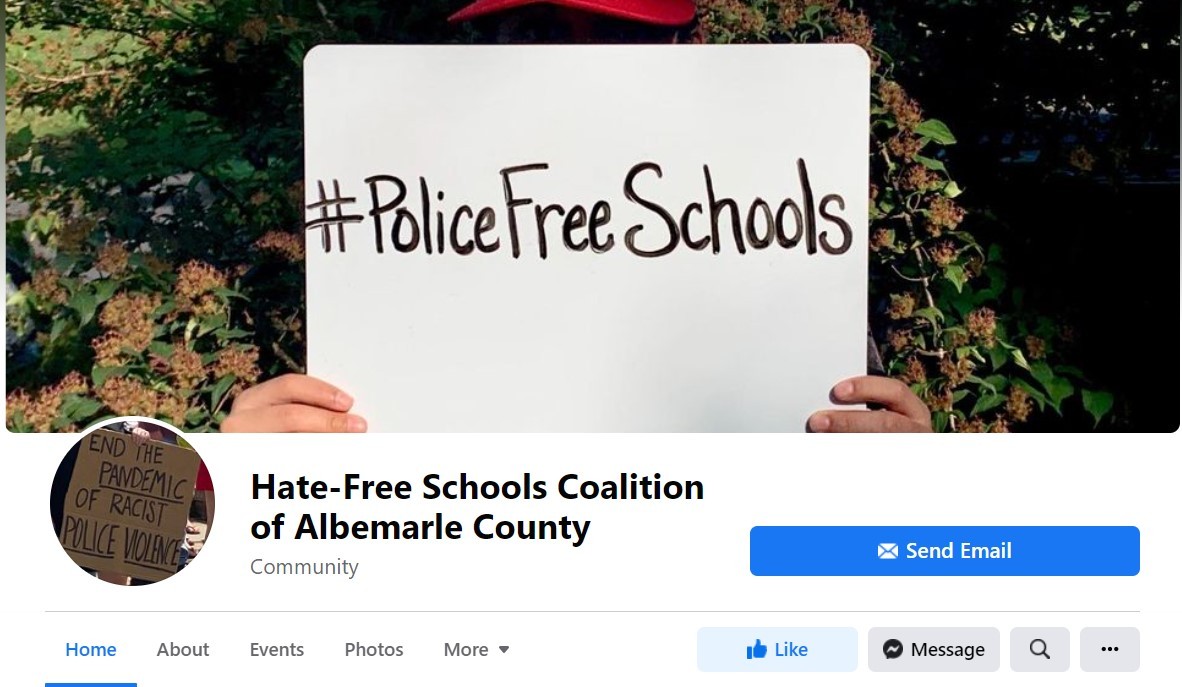 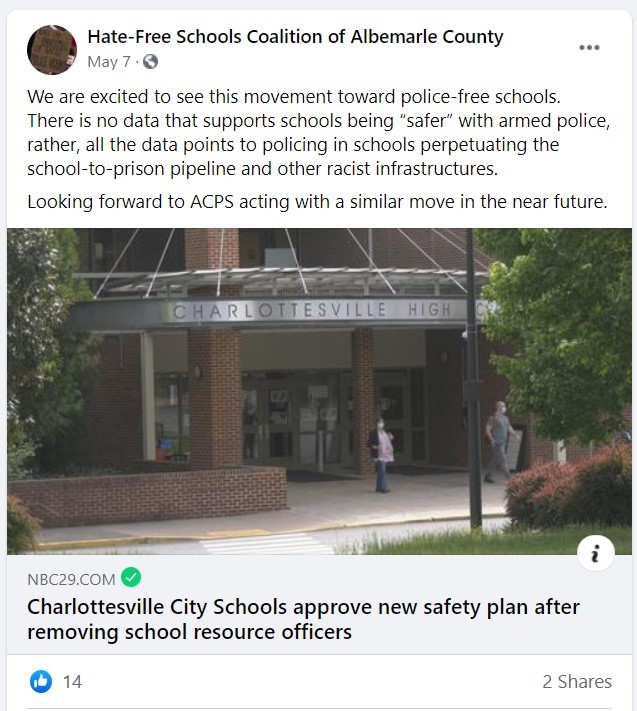 Moreover, as the “defund the police” movement has taken over the ideology of many on the left, HFSC takes it a step further by calling for the abolishment of police altogether: 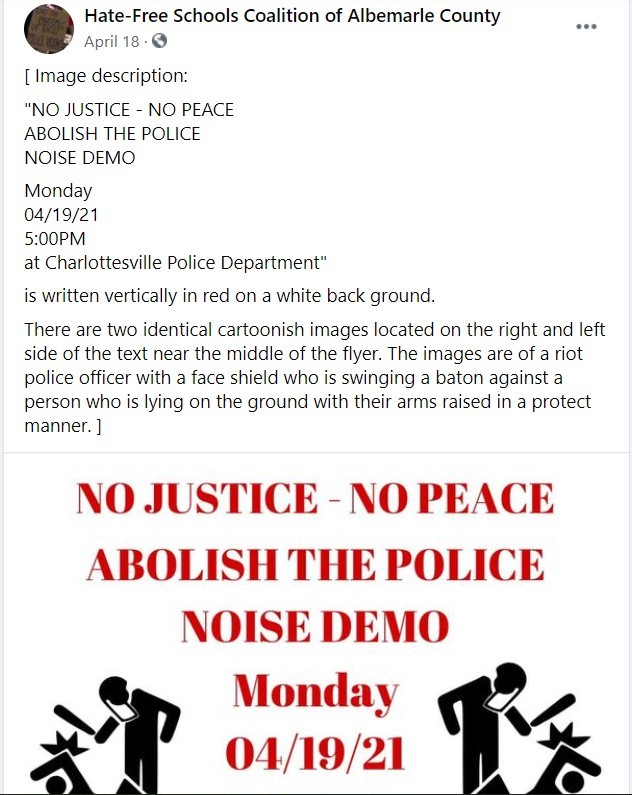 Indeed, as Breitbart News has thoroughly reported, defunding the police has led to one of the biggest violent crime waves in decades represented chiefly by spiking homicide rates in America’s major cities, primarily affecting the persons HFSC purports to represent.

The apparent defensive posturing from this group comes as other Albemarle County activists are attempting to force the radical race and gender curricula on children. As Breitbart News reported, “the threat of some parents seeking alternative options for their students has mobilized others in the County to seek sweeping parental regulations, barring them from making educational decisions for their own children” such as opting out of the course.

Despite this, as Breitbart News also reported, “[ACPS] ‘Diversity Resource Teacher’ Chris Booz … [said] the radical ideology ‘is going to be woven through in all of the classes in Albemarle County.'”