Director Robert Rodriguez’s spoof trailer for “Machete” was easily the best part of his and Quentin Tarantino’s failed attempt to return to those glorious days of early ’70s exploitation flicks with 2007’s “Grindhouse.” And it made sense that the fan reaction would eventually result in a feature film the director has wanted to make since the mid-nineties. If nothing else, Rodriguez is as famous for delivering low-budget, high concept genre films as he is for directing them. He’s even better at marketing himself and his latest project, exploiting to the hilt an intriguing concept that, unfortunately, usually fails to pay off in a satisfying way on screen. Politics aside, never has this been truer than with “Machete” (though the truly dreadful “Once Upon a Time in Mexico” is a close second).

Recently, Rodriguez has furiously tried to backpedal away from the racial bomb he exploded into the middle of the Arizona immigration debate back in May with his cravenly cynical attempt to market “Machete” using a racist trailer. After the backlash and with Texas tax credits on the line, the director’s now selling “Machete” as a goof, a “Mexsploitation” flick that harmlessly employs the same kind of over-the-top politics that have always defined the genre. But nothing could be further from the truth.

The story of a former Mexican “Federale” (the great Danny Trejo) framed for the attempted assassination of a racist Texas State Senator (the hammy Robert DeNiro) is both racial and racist. “Machete” isn’t about a political call for the powerless to fight THE corrupt MAN, it’s a call for revolution; Mexicans against Americans – and in the words of the character meant to be our evolving conscience, Jessica Alba’s Immigration and Customs Enforcement Agent Sartana, it’s about how those who believe in only LEGAL immigration “deserve to be cut down.” This is her rousing fist-in-the-air message to a gathered army of illegal day laborers who have been patiently waiting for the call away from their jobs as dishwashers, gardeners and hotel maids to wage war against a cruel America whose immigration laws, by the way, are nowhere near as harsh as Mexico’s.

Still, “Machete” offers no middle ground, no reasonable, non-racist position against wide open borders for those fleeing from what one character describes as the “personal hell” that is Mexico. And that character is Luz, (Michelle Rodriguez), a taco stand operator and the underground leader of a network dedicated to smuggling illegals across the border. However, she’s also stockpiling weapons of war for the coming “revolution” and represents SHE (an obvious reference to mass-murderer Che — nice, huh?), the mythical, female revolutionary figure who inspires illegals everywhere to fight for their right to be in America. Because, as Sartara sees it: We didn’t cross the border, the border crossed us!

Director Rodriguez attempts to disguise his toxic and racist message as something more accessible, the simple fight against DeNiro’s corrupt pol, his slimy aide (Jeff Fahey), and Steven Seagal’s Mexican drug kingpin. But this disguise doesn’t work. SHE’ is not a figure representing the fight for justice against injustice but rather of a coming and necessary revolution against America. Furthermore, when the Alba character stands on the hood of a car to kick off the film’s incredibly un-exciting and poorly choreographed race war climax, the war she calls for is not to stop violent racists but against an America (or Texas) that, in her delusional mind, is keeping people off land that is rightfully theirs (remember, the border crossed us).

And yet, never once does the movie bother to explain exactly what it is that makes America so special and attractive to those willing to risk their lives to get here. Can’t have that. Nor does anyone suggest that maybe the best place to wage revolution would be, I don’t know, that “personal hell” called Mexico. Can’t have that, either. Not when your protagonists are driven only by seething radical resentments, a misplaced sense of entitlement, and that warm, smug feeling of superiority that comes with assuming the role of the victim. But not victims of their own country, mind you, victims of America.

Hey, no one said hate had to make sense. 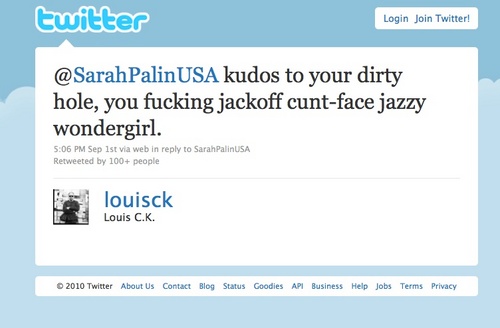 Who the illegals fight against on screen is one thing. What their words mean is altogether something else. That’s the shell game Rodriguez plays and his racially divisive messaging goes way beyond the normal cinematic political posturing and button-pushing. And you will never see a more stereotypically racist portrayal of Southerners, who, in an obvious reference to the border Minute Men, are not only played for cheap laughs but portrayed as sub-human animals who hunt and murder illegals – kill a helpless pregnant woman and say “Welcome to America.”

Other than that, though, “Machete” just isn’t very good. After a promising opening that’s cut, scripted, scored, and performed to look like something that played in urban downtown theatres during the Nixon years (including a scratchy and dusty print), Rodriguez decides to play it straight, which is a fatal mistake. Trejo makes for a compelling protagonist and the girls are plenty pretty, but the story is tediously episodic and confusing, with no momentum whatsoever. Other than a couple of inspired ideas within surprisingly dull action scenes, there’s not much here to satisfy action fans, even racist ones who hate Southerners and despise America.

For the record, I believe in the American melting pot. My wife was born in Mexico, English is her second language, and she didn’t become an American citizen until she was in her twenties. For that reason, and others, my family is more racially diverse than the bus passengers in “Speed.” So I guess that what I’m really trying to say is, fuck you Robert Rodriguez.