In February of this year, Magnolia Pictures’ owner Mark Cuban (pictured above shaking the President’s hand) attended a $30,000-a-plate fundraiser for President Obama where Cuban and our “first gay President” are reported to have “embraced warmly.”

Less than three months later, and after the whole War on Women fiasco blew up in the White House’s face, Magnet Releasing, a genre label owned by Cuban’s Magnolia Pictures, published a request that readers “get out your guns” against Governor Sarah Palin’s daughter, Bristol: 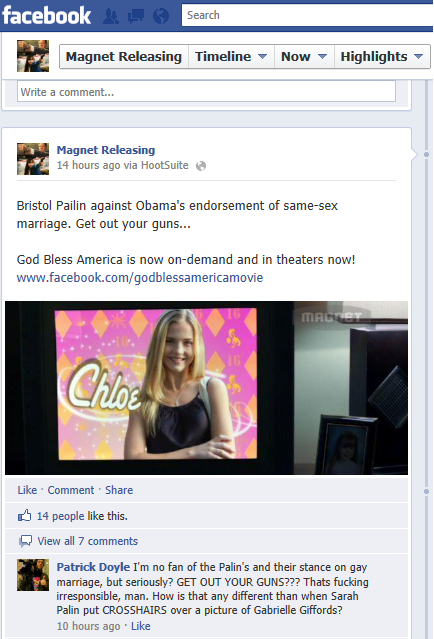 The phrase “get out your guns” refers to Magnet Releasing’s “God Bless America,” a new film by Bobcat Goldthwait that Critic Speak describes this way:

Granted, this [‘get out your guns’ comment] was consistent with the tone of the film it was designed to promote, Bobcat Goldthwait’s God Bless America. We here at Critic Speak found the movie’s militant brand satire, which effectively endorses the full-scale execution of brainless pop-culture phenoms and social conservatives, to be repugnant[.]

Here’s the thing, though: like most Mark Cuban films, “God Bless America” is a specialty title hardly anyone is going to see. So almost no one knows what “get out your guns” means.  Moreover, the “get out your guns” comment isn’t even surrounded by quotation marks to suggest it’s referencing a film or meant to be ironic. Read cold, it simply means murder Bristol Palin because she holds the same position on same-sex marriage Obama did last Tuesday.

For going on four years now, Governor Sarah Palin and her family have received numerous death threats. This open call to violence should be treated by authorities as another one.

Nor has the corrupt media asked the White House to distance itself from the hundreds of acts of criminality committed by the Obama-endorsed Occupy Wall Street movement.

Since the media refuses to hold the President of the United States responsible for the behavior of his allies, maybe for the first time during his failed presidency, Obama can act like the President of all the people, and demand a stop to this behavior.