When atheist director and co-writer Darren Aronofsky promised that his epic “Noah” would be “the least biblical film ever made,” that was not hyperbole. “Noah” is a brilliant, compelling, beautifully-mounted, beautifully-acted piece of storytelling conceived for the sinister purpose of leading people to believe that Christianity and Judaism are something they are not.

And I ask you, could anything make Satan happier than something that leads people to believe they are saved when they are not?

I have absolutely no problem with a filmmaker taking a biblical story and adding or subtracting from it as a way to craft a compelling film. There are all kinds of plot points in Cecil B. DeMille’s 1956 masterpiece “The Ten Commandments” that you won’t find in the Bible.

Furthermore, Ben-Hur is a fictional character. Somewhere around 99% of “Barabbas” (1961)  is made up. The “Robe” (1953) is as phony as “Barabbas.” I love all of these movies. I’m no purist. If you want to use the Bible or Christ as a jumping off point to make something up, knock yourself out.

Even Aronofsky does this. In the source material — aka the Bible — Noah’s sons all have wives…

On that very day Noah and his sons, Shem, Ham and Japheth, together with his wife and the wives of his three sons, entered the ark.

For dramatic purposes, Aronofsky alters this. The three boys do not have wives and this fact helps drive the story.

It is not about being faithful to the stories, plot points, and dialogue of the Bible. One of our greatest gifts from God is the muse of inspiration, especially artistic inspiration that is meant to glorify God.

What does matter, though, is The Message. The Message is everything. And this is where Aronofsky is the snake in the garden. Using $135 million, he and Paramount have brilliantly and deviously disguised the Pagan god Gaia as the God of the Old Testament … as THE God.

And let’s give the Devil his due: using the story of Noah to twist Christianity into something it is not, is a genius piece of propagandizing that is sure to lead many away from God under the mistaken belief that through left-wing environmentalism they are coming closer to Him.

Aronofsky is the anti-Michelangelo: a master craftsman using his talents to a dishonest and wicked end. 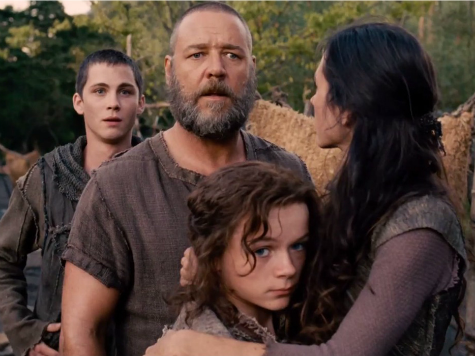 Let me put it this way: According to Aronofsky’s mesmerizing multi-million dollar masterwork, God will later hand Moses only One Commandment: Thou Shalt Not Harm Mother Earth Beyond What Is Absolutely Necessary to Live In a Tent as a Vegetarian.

From the Bible: The Lord saw how great the wickedness of the human race had become on the earth, and that every inclination of the thoughts of the human heart was only evil all the time. 6 The Lord regretted that he had made human beings on the earth, and his heart was deeply troubled. 7 So the Lord said, “I will wipe from the face of the earth the human race I have created–and with them the animals, the birds and the creatures that move along the ground–for I regret that I have made them.” 8 But Noah found favor in the eyes of the Lord.

In “Noah” the only  sin for which God is destroying all of humanity has nothing to do with wickedness or evil as defined by what we know will be God’s laws — the Ten Commandments. The sins of idolatry, blasphemy, dishonesty, adultery, and treating your parents with disrespect have absolutely nothing to do with why God wants to flood the earth and start over. “Noah” isn’t even interested in Jesus’ commandment to love one another as you love yourself.

In the nick of time, it is Noah (Russell Crowe, in a terrific performance), the environmental-extremist, who saves that innocent flower from his young son’s “it’s pretty” excuse.

We are even told outright by our protagonist Noah that the “Creator” (as God is referred to throughout) is wiping out humanity because of what man has done to His creation. Except for one quick glimpse of what might be a rape, moral degradation and sexual perversity are not even hinted at among the Flood victims.

Every glimpse of those God will wipe out shows these “sinners” exploiting Mother Nature. They butcher meat, tear live animals to pieces, hunt, mine, and cut trees. According to Aronofsky, that is all these people are guilty of and that is enough to justify the coming biblical genocide.

Every action taken and piece of dialogue spoken by the “sinners” (as personified by the strip-mining villain Tubal-Cain, a hale and hearty Ray Winstone) is about man’s right to dominate the earth. Tubal-Cain even goes so far as to eat an endangered species alive, one of two lizards left on earth. The brute.

Moral and sexual depravity aren’t even hinted at as sinful. Nor is idolatry. Tubal-Cain and his hordes of follower have not built a golden calf. In fact, they believe in God. 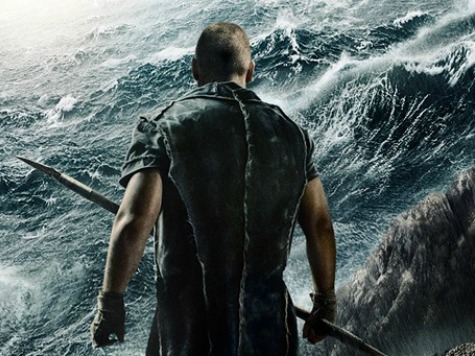 Nonetheless, Aronofsky’s blasphemous claim that God is some kind of tree-hugger who wiped out humanity in the Flood to save the planet and punish Man for hunting animals is a bald-faced lie.

We know this because saving the spotted owl is nowhere in what wil later be revealed as God’s Law: The Ten Commandments.

We especially know this because after the Flood God gave Noah, and therefore Man, a Covenant that included the okey-doke to eat animals:

Then God blessed Noah and his sons, saying to them, “Be fruitful and increase in number and fill the earth. 2 The fear and dread of you will fall on all the beasts of the earth, and on all the birds in the sky, on every creature that moves along the ground, and on all the fish in the sea; they are given into your hands. 3 Everything that lives and moves about will be food for you. Just as I gave you the green plants, I now give you everything.

NOWHERE is that piece of the Convenant mentioned in the movie because it would completely contradict almost all the pagan propaganda that came before.

Now you need to brace yourselves because the environmental message is the least sinister part of the film….

In “Noah,” there is one man who does judge others for being “covetous” and lustful and some other legitimate sins, and it is not God. It is Noah. And Noah does not see these qualities in the humanity God will wipe out, he only sees them in his own family — the very family God has chosen to survive because of their righteousness. And…

…Noah is portrayed as a dangerous religious-extremist for judging others in this way. It is at this point, he goes off the deep end in a fit of self-righteousness that ends with a promise to murder his own newborn granddaughters.

Aronofsky isn’t just ignoring the reason God sent the Flood; he isn’t just switching the real reason out with his own paganism; he is perverting God’s real reason by portraying that reasoning as extreme and mad.

The only place Aronofsky seems to have compromised his pagan vision is at the end of the movie — but only because he had no other choice. The director is forced to concede that after the Flood, God did give humanity a second chance.

But you do get the sense he wished it had gone the other way.