“The Purge: Anarchy” is a big improvement over last year’s “Purge,” which squandered its splendid concept on a substandard home invasion plot that was way too self-contained and rote. When a film sets up a world in the near-future where for one night a year all crime, including murder, is legal, you want to take a look around outside, not spend the evening in a McMansion.

Writer/director James Demonaco returns for “Anarchy” and thankfully broadens his scope, not just physically throughout downtown Los Angeles, but culturally. Using a large physical, socio-economic, and political canvas, “Anarchy” not only succeeds as an exciting genre film but even more as a blistering criticism of where President Obama, the mainstream media, and the political Left intend to take America.

The year is 2023 and 9 years ago the dual crises of urban criminality and nationwide financial turmoil were not allowed to go to waste. A sinister agenda to fundamentally transform America was completed through the tyranny of a majority who voted to grant the Federal Government extraordinary powers. As a result, our beloved Founding Fathers were tossed in favor of the New Founding Fathers.

Today the Federal Government is a subject of worship. The very concepts of God and patriotism have been co-opted and perverted into worship of the State and the aborting of the sick, old, and undesirable. A chirpy, shallow, dim-witted, happy-talking and omnipresent 24/7 hour media cheerleads everything. 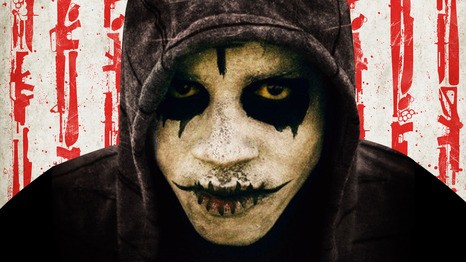 The ends justify the means, though, because crime and unemployment are at record lows. Well, at least that’s what our benevolent government and media overlords tell us. The apparent reason for this is the Purge; an annual suspension of law and humanity that gives anyone who feels they need it, 12 overnight hours to legally work through their rage, hate, and primitive desires on anyone they can get their raping, murderous hands on.

Naturally, the Federal Government uses the Purge as a means to its own ends. Without giving too much away, let’s just say that through the use of what you might call Death Panel Trucks, the Federal Government rids America of the weak and undesirable while at the same time practicing a mutually-profitable type of crony capitalism that serves the Top 1%.

Somewhere in the wilderness of the Internet is the voice of Carmelo (The Mighty Michael K. Williams). He might wear Che’s beret but he talks like Thomas Jefferson of freedom, of a corrupt Federal Government out to empower and enrich itself, and of the purity of Jesus and other religions.

To fight the government’s faceless, black-armored para-military soldiers given an edge by a massive surveillance state, Carmelo not only needs, yes, guns to fight the Federal Government, he also violates the government’s efforts to ban certain weapons (defined as Class 4).

Thankfully, for the sake of human liberty, Carmelo seems to intuitively understand that the Federal Government bans certain weapons to seek an advantage in controlling the populace. 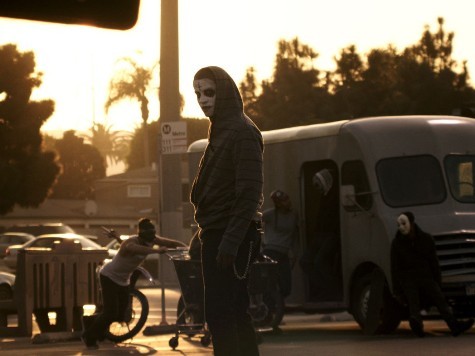 Caught between street thug Community Organizers wearing Occupy Wall Street-type masks, the Federal Government, and the Top 1% being serviced by both, are the Working Class.

As defined by our unnamed reluctant hero (Frank Grillo); Eva (Carmen Ejogo), a struggling Hispanic waitress; her daughter Cali (Zoe Soul); and a young white couple with marital problems (Zach Gilford and Kiele Sanchez) — all of whom are on the run for their lives — these everyday Americans don’t care about race or class. They get along fine and just want to live their lives. The Federal Government can’t allow that, though, so it sows seeds of hate and division to keep itself empowered and necessary.

As social commentary, I’m in love with “Purge: Anarchy.” As an action movie based on the premise of humans hunting humans, it never grabbed hold of my guts or created much suspense. I was plenty entertained, no question, and am excited at how the sequels will further explore a fascinating concept filled with endless possibilities.