Destiny‘s excellent combat and gorgeous visuals lay the groundwork for what should be a world-beating shooter, but the game’s strengths are undercut at every turn by baffling design decisions, repetitive missions, and the failure to live up to the lofty expectations set by developer Bungie.

After spending time with it for the better part of two and a half weeks, I can honestly say Destiny is one of the most frustrating games I’ve ever played. Almost every enjoyable aspect is offset by equally discouraging design problems, resulting in a game you want to love but that keeps slapping you in the face every time you try to give it another chance.

Take the story, for starters. Destiny centers on The Traveler, a city-sized alien sphere of unknown origin and purpose that appears above Earth in the future and gifts humanity with advanced technologies that fuel a Golden Age of interstellar discovery and expansion. This draws out hostile alien races and a powerful evil force called The Darkness, who wipe out all civilization except for a single city on Earth before The Traveler stops them.

Players take on the role of Guardians, champions resurrected by the Traveler’s mystical Light (this is never explained) to protect The Last City and take back the worlds that were lost. Players can choose from three races (Human, Awoken, or Exo) and three classes (Titan, Hunter, or Warlock) and customize the look of their avatar before setting off to defend humanity. 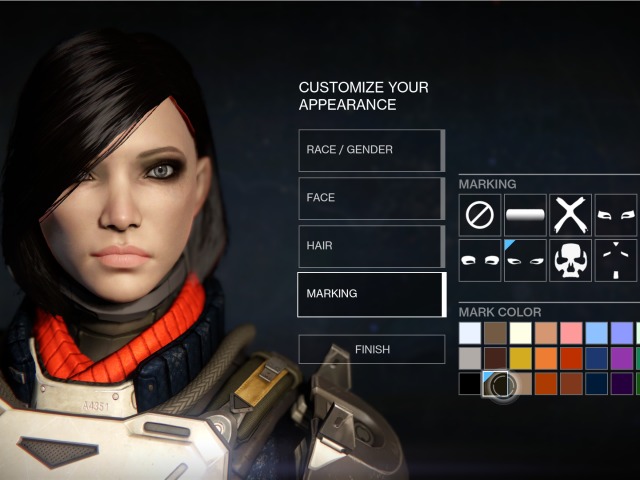 The game comes out strong with this premise–cool alien cultures to discover as you secure humanity’s destiny (get it?) among the stars. Unfortunately, you won’t understand The Traveler, The Darkness, The Collapse, or any of the alien enemies any better by the time you finish the game. Destiny‘s writing is shallow and childish, like high school fan fiction first concerned with creating tableaux of badass space heroes and villains. You want a theme? You want character arcs? You want coherence? You won’t find them. By the time the last cinematic ended, I had learned nothing about the game universe, its characters, or even what I had accomplished or why I did it. I didn’t even know what the explanation was for the existence of my character’s race, the robotic Exo.

The game does drip-feed you bits of lore by unlocking collectibles; these “Grimoire Cards” aren’t particularly insightful or interesting. Oh, and they can’t be accessed in game; the only way to view them is to set up a Bungie.net account, link your Xbox Live gamertag or Playstation Network account to it, and review them outside of the game. That’s right; to enrich your game experience you have to get out of the game. 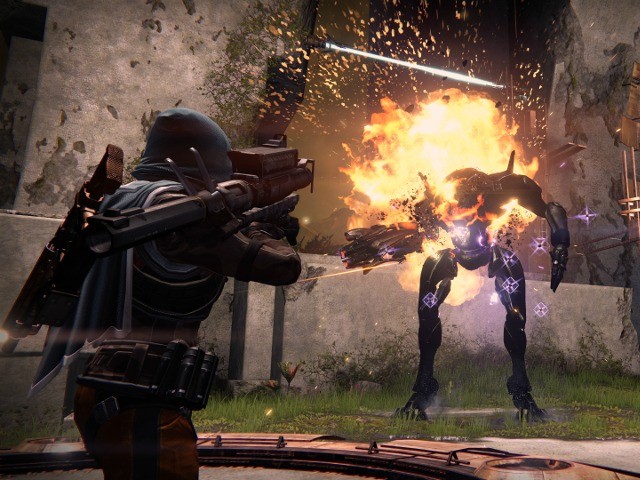 Then, when it comes to gameplay, Destiny’s design philosophy is always one step forward, two steps back. The gunplay is excellent; the mission structure is a bore. Fans of Halo will feel right at home here, but the game surpasses Halo with added customization via three separate weapon classes, multiple grenade types, class super powers, and deep skill trees, all of which can be changed on the fly. The combat is fast, fluid, and intense, and while the enemy AI isn’t as clever as Halo‘s Covenant, the sheer number of foes thrown at you, plus their diverse abilities, will keep you moving and thinking.

The problem is that Destiny doesn’t offer enough to do or enough motivation to keep doing it. You can tackle story missions on your own or cooperatively with two other players; “strikes” are challenging dungeons populated with hordes of difficult enemies and bosses; and each of the four locations (Earth, Venus, Mars, and the Moon) can also be explored in free-form open world “patrols” offering random mini-missions.

Unfortunately, almost everything the game has to offer can be seen in 15-20 hours. That’s a respectable play time in comparison to other first person shooters, but Bungie billed Destiny as a game to rival MMORPGs, and in that category it simply can’t compete. Players will quickly hit the level cap of 20, and at point the only way to increase your character’s level is by finding pieces of armor with a Light statistic.

This wouldn’t be a problem if Destiny‘s loot system wasn’t completely broken, so much so that players have resorted to exploits to mass farm loot drops in the hopes that, by sheer volume, one piece of equipment they pick up isn’t absolute garbage (Bungie has since patched these exploits out of the game). Bungie itself has acknowledged the current loot system is unrewarding and will be addressed in a future patch. 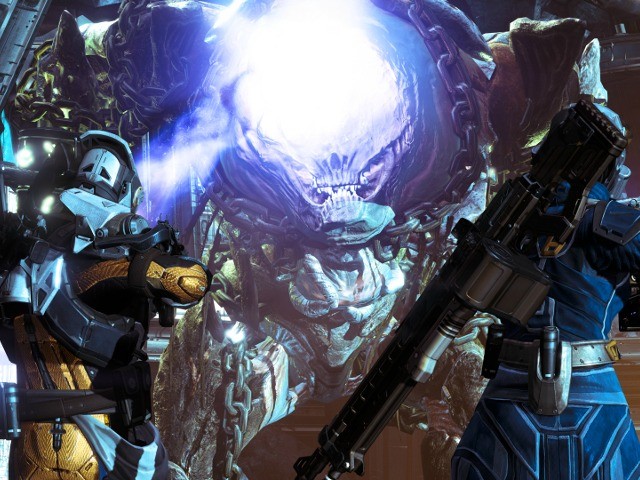 Until then, the best way to acquire better gear is by grinding through the same missions, strikes, and bounties to earn faction reputation and currency to buy high-level equipment. At this point, the dearth of content screams at you every second. Destiny may be the “biggest” game Bungie has ever made purely from a geographical standpoint, but so much of the game world is empty and you’re repeating the same activities over and over again, it soon feels like a goldfish bowl.

Each planet is limited to one zone. Where are the vast worlds that Bungie promised when Destiny was first announced: “the ruins on the edge of the European Dead Zone, the swamps of Old Chicago… derelict fleets floating in the rings of Saturn… giant obsidian pyramid ships, mile-long tomb ships, and much more”? I understand that games constantly change during the design process, but the amount of content in Destiny at launch is a fraction of what they said would be in the game. Of course, that missing content will surely be available later as DLC–at $10 or $20 a pop, most likely.

You’d think that after a decade of Halo being a defining console FPS multiplayer experience that Destiny‘s saving grace might be its competitive multiplayer component, but you’ll be disappointed to find that, again, the experience is extremely limited. The game has only a handful of maps and a scant four multiplayer modes to play: Control, where players fight to capture objective zones; Clash, straight-forward team deathmatch; Rumble, a free-for-all deathmatch mode; and Skirmish, 3-vs-3 team deathmatch on smaller maps with the ability to revive teammates.

Every weekend Bungie adds a fifth multiplayer mode that is available for a few days, which begs the question why they aren’t permanent playlists when the multiplayer modes are so limited to start with. Maddeningly, one of the modes, Salvage, was only available for the first weekend after the game’s release, but the game has still listed bounty rewards on it while it isn’t even a playable mode. Meanwhile, Combined Arms, last weekend’s featured playlist, offered the promise of vehicular mayhem but amounted to nothing more than maps that already featured vehicles, just with a more frequent spawn rate. 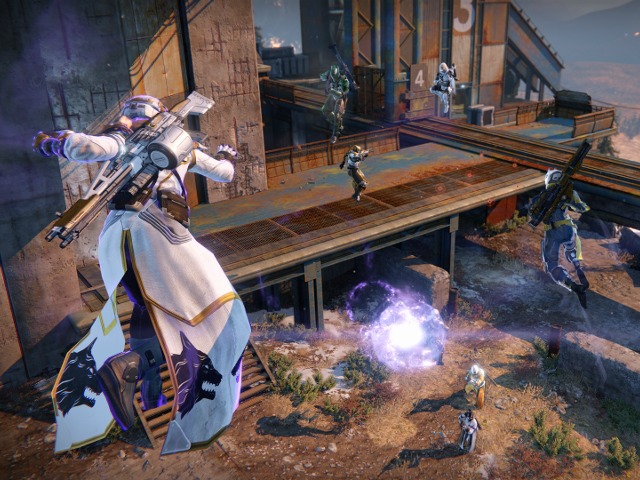 Playing in the Crucible also grants a chance for loot at the end of each match, but there doesn’t seem to be any rhyme or reason to the way in which rewards are doled out. It’s not uncommon to absolutely dominate a match, only to see every other member of your team rewarded with a plethora of new gear while you get nothing.

For those looking for some form of endgame content, Bungie released the first raid for the game last week, a massive dungeon that can take hours for six high-level players to tackle cooperatively, with the promise of epic rewards for those who could complete the challenge. However, the first group to complete it (over the course of nearly eleven hours) didn’t earn a single piece of loot better than what they carried into the raid.

Good luck getting into a raid in the first place, as, unlike most other facets of the game, there is no matchmaking to allow players to group up to attempt it. The only way to undertake the raid is by getting together five other friends for a marathon session of gaming, potentially gating off what Bungie has called one of the most important pillars of the game to a large contingent of players.

That’s Destiny in a nutshell: constantly dangling the promise of an epic experience and rewards in front of you before snatching it away with a laugh. It is infuriating to witness the wasted potential on display here; this is a game obviously lovingly built by talented designers, with amazing production values, thanks to the enormous investment from publisher Activision (you can practically smell the rust of the post-apocalyptic tundra of Old Russia and feel the grit in your teeth as you wander through the barren landscape of Mars) that disappoints because of the framework wherein those art assets exist.

Destiny is billed as an MMO, but it’s much more akin to games like Diablo or the original Guild Wars, with players traveling to The Tower, the hub area in The Last City, to accept quests, buy equipment, and store or retrieve gear from their personal vault before heading out to missions in instanced areas where only they and players who have been invited to their party can play. It is clearly behind the times in what its competitors have to offer to keep players engaged, and I predict it will have a high attrition rate as players become fed up with its shortcomings.

The best way I can sum up my experience with Destiny is by saying I’m glad I’ve played it, but by publishing this review I’m glad I don’t have to play it anymore. It’s a game that’s fun at first but quickly outstays its welcome thanks to unrewarding repetition and a disappointingly shallow amount of content. I completely agree with Bungie’s claim that Destiny becomes “a whole different kind of game” after twenty hours; unfortunately, at that point it’s an unenjoyable slog of diminishing rewards that I don’t have any incentive to keep playing.