Supporters of the GamerGate movement have been working tirelessly to hunt down those who would use their banner to cause personal harm–all while the media continues to claim that GamerGate members are either participating in or indifferent to the harassment of women in the gaming industry.

On Thursday, Salon published a column titled, “#Gamergate is really about terrorism: Why Bill Maher should be vilifying the gaming community, too.” In the article, the author correlates GamerGate to the actions of fundamentalist Islamist terrorists: “putting statements from your garden-variety Islamic extremist side by side with the kinds of threats Sarkeesian and others have received, it’s clear these two groups share some similar attitudes toward women.”

While the thrust of the article is focused more on what the author perceives to be a double standard in the treatment of the Muslim community as a result of the actions of jihadists, it furthers the idea that GamerGate is a hate movement with no place in any discussion of transparency and ethics in the gaming industry and press. In doing so, it shows how the media is so invested in demonizing GamerGate that it is silencing the best ally in combating online harassment: GamerGate supporters themselves.

Margaret is an avid GamerGate supporter and has been working along with others since the movement’s inception to protect both supporters and critics of GamerGate from harassment and abuse online. Margaret credits Twitter user @LetsSailHatan for coming up with the platform that has allowed anyone concerned with online threats, doxxing (the revealing of personally identifying information), and harassment to identify and shut down such trolls on Twitter: the #GamerGate Harassment Patrol.

“You show us who’s harassing, attach the words ‘#GamerGate Harassment Patrol’ to the tweet, and we in #GamerGate all report them at once,” Margaret explained. “We’ve gotten accounts suspended in less than 15 seconds this way: it’s VERY helpful for erasing dox that people post of others.”

“Anyone sending threats is not welcome in #GamerGate,” she continued. “We have random people come in and use the tag to send death threats. We don’t want them, we don’t need them, and we are watching to make sure that their crimes are reported to the proper authorities.”

“If you report harassment and include the exact words ‘#GamerGate Harassment Patrol’ in your tweet, it shows up here, and many of us see it,” Margaret explained. “As long as I’m at my desk, I keep a window showing the tag open. All it takes is one retweet and even more people see it, more people report it, and the account gets suspended.”

Margaret herself has been a victim of harassment, having received “two rape threats and two death threats.” She has also been doxxed, but she noted that when it happened on the image board 8chan, the community responded quickly to protect her: “No one else in the thread wanted anything to do with the person posting the dox: they didn’t approve of the posting of dox; they swore at the person who posted my dox.”

“The staff of /gg/, the ones who moderate it, protected me, removing the dox in record time. They deleted my dox in FIVE MINUTES,” she stressed.

Margaret’s experience is hardly unique as a GamerGate supporter. She provided me with extensive documentation of death threats, doxxing, and harassment committed against GamerGate supporters, all of which can be found in a growing catalog at the Twitter account @TheBattleAngel. The point of doing so isn’t to justify a never-ending back and forth of attacks between supporters and critics of GamerGate but to highlight the discrepancy between the media’s attempts to mischaracterize GamerGate based on the actions of extremists while ignoring critics of GamerGate engaging in the same type of behavior. “I’m more infuriated that there are so many people who keep getting death threats, and yet the media keeps on saying that THEY are the terrorists,” she said.

While the media continues to ignore the abuse directed at GamerGate supporters and the efforts by members to police the movement, two noted critics of GamerGate have not. Zoe Quinn, the developer of Depression Quest who has been at the center of the current controversy from the beginning, tweeted:

Leigh Alexander, the author of the controversial “‘Gamers’ don’t have to be your audience. ‘Gamers’ are over,” article, tweeted her appreciation of GamerGate supporters’ efforts in combating a serial harasser of Anita Sarkeesian:

I asked Margaret how it made her feel, as a victim of rape and death threats, to see the media make sweeping condemnations of GamerGate as a hate movement based on the incidents of threats from extremists while refusing to even acknowledge that GamerGate supporters are subjected to those same threats every day.

“I feel like I’m taking crazy pills. It feels like the media condemning GamerGate either has no ability to do basic research, or they’re missing every single piece of information that contradicts their idea that #GamerGate is evil,” she said. “Seeing attack pieces come out every day for the last two months from every imaginable news source, it’s boggled my mind. I don’t understand what they’re seeing, or where they’re getting most of what they say from.”

She noted how Sam Biddle, editor of Gawker’s Valleywag site, took to his Twitter account to advocate bullying of GamerGate “nerds” and how members of the media have tried to dismiss Biddle’s remarks as simply “jokes.” Biddle himself claims, “I have literally not seen a single person who is not a Gamergate supporter who did not get that I was very obviously joking. Not a single one.”

Well, aside from Adobe, a company that earned more than $4 billion in revenue in 2013, finding Biddle’s tweets so onerous as to publicly disavow any affiliation with his employer and condemn bullying, at least one person who is definitively not a supporter of GamerGate didn’t believe he was joking: Zoe Quinn. 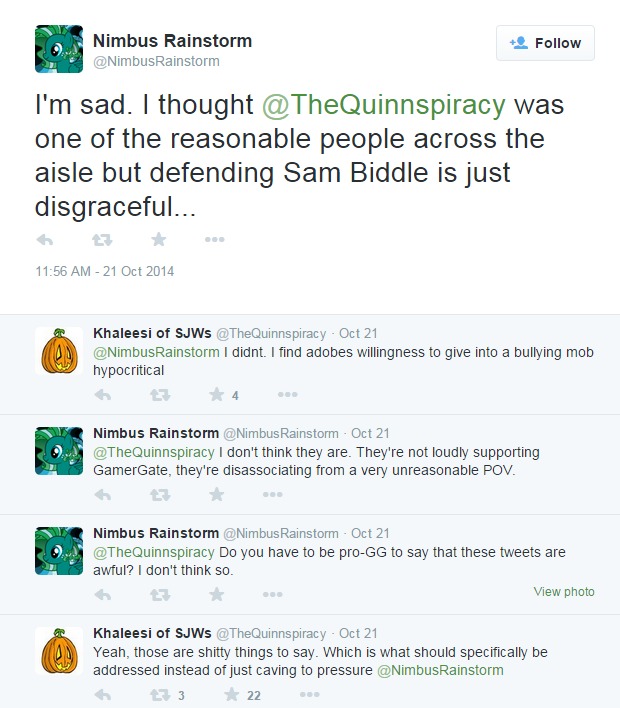 “People in GamerGate can’t police people in GamerGate as well as Gawker can police their employees’ behavior,” Margaret argued. “GamerGate is expected to police the behavior of thousands of anonymous individuals over the Internet, but when it comes to Sam Biddle, it’s just ‘a joke,’ and we should all apparently move on and ignore what he said.”

“Every day, articles come out that say that #GamerGate is filled with inhuman monsters,” Margaret told me. “When I get called a terrorist for 2 months, and all I’ve been doing is actively protecting people online, I have to wonder what’s going on. It’s baffling.”

Margaret continues to take all of these attacks in stride, though she does worry about the consequences to the gaming community if GamerGate succumbs to its critics. “If #GamerGate loses, smear campaigns like what’s been going on for two months may become the norm,” she said. “Imagine a world where journalists could call anyone a terrorist, and no one could do anything about that: everyone would just blindly listen to the journalists and believe what they said. That is a terrifying outcome.”

“Due to all the hurtful things said against #GamerGate, playing games has become a sore spot for me,” she admitted. “It reminds me of everything developers and video game journalists have said about GamerGate. I can’t be the only one who feels like this, and undoubtedly it’s affected what games people buy and play.”

At the heart of the issue is a gaming press that is unwilling to acknowledge any facts that would contradict its narrative of portraying GamerGate as a hate movement whose questioning of the media shouldn’t be given any credence. “Many people on both sides feel that there are individuals who see this consumer revolt as being an opportunity to cause trouble. GamerGate is not the source of the death threats; nor is Anti-GamerGate. We are both victims of harassment, and that’s just the very reason why I keep enlisting ‘anti’-GamerGate’s help in reporting threats and protecting people,” she argued. “Because GamerGate isn’t the source of it, and Anti-GamerGate isn’t, either. We’re both getting attacked, and we desperately need to join forces in protecting each other. I wish the media could see that.”

“The media’s response has made this issue so divisive,” she said. “GamerGate does not have to stop: the media’s negative portrayal of GamerGate has to stop.”

Until it does, Maragaret and many other individuals will continue to work to make the Internet a safer place for all parties.