God damn these people to Hell.

Let me start things off by pointing and laughing at George Clooney, Robert Redford, Meryl Streep, Tim Robbins, John Cusack, Leonardo Di Caprio, Paul Greengrass, Matt Damon, and Paul Haggis — all of whom made films critical of a sitting president’s foreign policy that ended up being, not only box office catastrophes, but creative embarrassments; completely forgettable, preachy, pedantic, just plain lousy movies no one will ever see again.

Now I have even worse news for them…

Michael Bay — you know, the guy who makes those “Transformers” movies —  just made a film critical of a sitting president’s foreign policy, and knocked it straight out of the park.

Bay’s “13 Hours” is not only a compelling, unbearably tense, brilliantly choreographed action film, but like a true artist, he does not stoop to being preachy or pedantic to make a damning case against a Obama Administration, that not only has a depraved indifference towards the truth, but also towards American lives.

On September 11, 2012, a horde of armed terrorists launched nothing close to a protest spurred by an anti-Muslim YouTube video. There is no question the attack against our diplomatic compound in Benghazi, Libya, was coordinated, swift and deadly. Despite repeated pleas for additional security (all ignored by Hillary Clinton’s State Department), Ambassador Chris Stevens had only unreliable locals and a handful of State Department agents protecting him.

The battle was lost before it began.

Just a mile away was our not-so-secret CIA outpost. As soon as the militants hit, the outpost called the CIA annex begging for help. Within minutes, six security contractors stationed there, all former special forces-operators, were ready to launch a rescue mission. The CIA annex chief (David Costabile) refused to let them go. Repeatedly, the six men are ordered to stand down.

For 20 agonizing minutes, Jack (John Krasinski), Rone (James Badge Dale), Oz (Max Martini), Tanto (Pablo Schreiber), Tig (Dominic Fumusa), and Boon (David Denman) wait in a bureaucratic hell. One says in frustration and disbelief, “If the consulate had ordered a fucking pizza it would have been there by now.”

From the roof, these warriors watch helplessly as the flames consuming the consulate burn higher. Now that it looks like a suicide mission instead of a rescue mission, they ignore the stand down order and do their duty.

While there is no questions those 20 precious minutes cost the lives of a fine ambassador and Information Management Officer Sean Smith, the six man team is still able to rescue a handful of American personnel and, after a brutal firefight, make it back to the CIA compound. 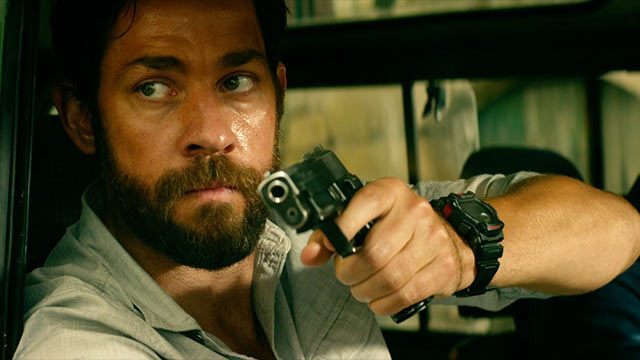 Unfortunately, their problems have only just begun. Armed militants, who are part of the al Qaeda-affiliated Ansar al-Sharia, gather in the dark, creep, attack in waves, retreat, and then prepare to start all over having learned more about the annex’s defenses.

There is no question, though, that the arch-villain of “13 Hours” is the White House and Clinton’s State Department. Bay never names names, never launches a diatribe, but his fury at the American government for abandoning these men, along with the 30 or so others stationed at the annex, is both palpable and contagious. (An offhand comment about one of the attacking terrorists being a former Gitmo detainee is especially timely.)

Overhead, throughout this terrible night, a military drone witnesses everything, and our government does nothing. Repeatedly, desperate calls are made begging for air support — if nothing else, a simple flyover to scare the militants. Just a few hundred miles away, F-14s sit idle on an aircraft carrier. 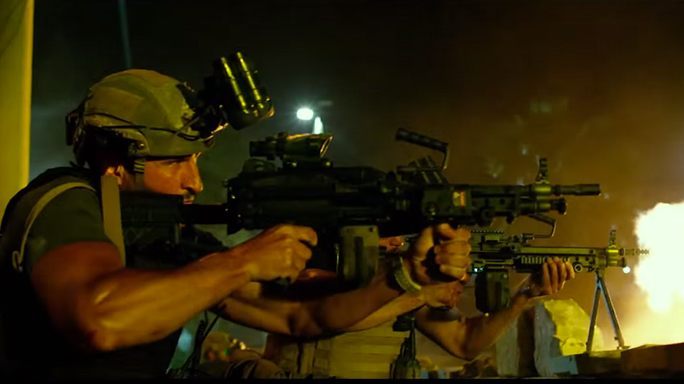 Even the next morning, after it is all over, even after two more brave men are dead and all the CIA staffers have been placed safely aboard a departing plane, the American government doesn’t come. Our heroes have to rely on a foreign government to get them home.

The pacing is breathless, the acting superb, and no one’s humanity is forgotten in the process. Ambassador Stevens is portrayed as a heroic idealist, and you cannot help but mourn his loss. Even the CIA chief is not portrayed as a one-dimensional villain. He may be a bureaucrat but he is a competent one.

In the middle of it all, during a rare break in the danger, the incredulous men learn that our corrupt media has already assumed their favorite position as a Tool of the State; that the media is already dutifully reporting the White House lies about protests and YouTube videos; already working hand-in-hand with the Obama campaign to cover-up the truth to re-elect a failed president.

To protect their role in that cover-up, and to drag Hillary Clinton over her own finish line, that cover-up continues to this day. The real injustice, though, has nothing to do with politics. What happened over those 13 hours was a modern-day Alamo, and because our DC Media is nothing more than a pile of boot-licking liars and propagandists, these six heroes have had to wait three years to receive their due.

In case I didn’t mention it, “13 Hours” is nothing close to political.