Let’s be honest: The real reason Milo Yiannopoulos is banned from Twitter is because Leslie Jones stirred up drama to keep her bomb of a movie in the news.

The Ghostbusters star threw a tantrum in a public forum and dramatically announced her exit, spawning article after article patting her back and shaming her tormentors. She perfectly ran the crybully playbook.

And it all smells of cynical PR — Sony trying desperately to minimize Ghostbusters’ second-week drop after a humiliating box office debut.

Of course, as a bonus, Jones cried “harassment!” when Milo teased her, giving some purple-haired Orphan Black addict at Twitter an excuse to ban him permanently from the platform.

The company’s official reason for the suspension said: “Your account has been permanently suspended for repeated violations of the Twitter Rules… specifically our rules prohibiting participating in or inciting targeted harassment of individuals.”

The only person who put a target on Leslie Jones was Leslie Jones. The comedian, who has been on Twitter since 2009, ought to know how social media works. Ordinary people say nasty things to famous people. And when they get a reaction from famous people, they do it even more.

Come at me, Trolls

Jones was punching down at trolls for hours before Milo ever mentioned her.

She began fighting with random, unknown Twitter users that day starting at 11:40 AM.

First: someone who called her “a less funny, less talented Mad TV Bunifa. Or she is just the most the most obnoxious person on the planet.” (Jones actually responded to a white knight who was defending her — she didn’t pick up on his obvious sarcasm.)

that muthafucka aint no comedy expert! but he want to be me though

Next: Someone who sent her a YouTube video of a woman criticizing the new Ghostbusters.

just have nothing better to do huh.

Next: A black woman who said a different actress should have played Jones’ character.

bitch are you joking?! how sad for you. no shade?! so tired of black women like you so tired.

And finally, what seemed to set her off: an alt-right Twitter account that quoted Jones and said “Stereotypes are real.”

@MarkPaleo @jamanleyx so are idiots and y'all are proving it!

Shortly after noon, Jones posted an announcement to all her followers:

Some people on here are fucking disgusting. I'm blocking your filthy ass if retweet that perverted shit. Just know that now bitches!!

Anyone who knows anything about online interaction knows what this really meant:

To a Twitter troll, there is no greater rush than a response from an angry celebrity — the knowledge that you, in the middle of Podunkville, USA, have the power to get under the skin of someone rich, famous, and surrounded by ass kissers.

So, yes, Jones incited the mob that went after her on Twitter. She was not a victim; she was taunting people — using the press to send messages like this Entertainment Weekly headline: Leslie Jones slams sexist Ghostbusters haters: ‘What will you tell your daughter’?

One Twitter user, who she quickly blocked, retorted, “That once upon a time people were allowed to express different opinions from the elite without being labelled as ‘haters’.”

And let’s take a moment to unpack the end of this: “Jones incited the mob that went after her on Twitter.” Nothing that these mean tweets said put her in danger, hurt her financially, etc. And at any moment, she could have silenced her “perverted” mentions through a number of means:

Instead, Jones chose to fight with strangers on the Internet and get herself even more worked up. And she did it for hours before Milo ever mentioned her.

The timestamps on Milo’s tweets to Jones aren’t available, since his account has been purged, but a screenshot with no given time zone places the first one at 2:54 PM. If that is in fact the time of the message, Jones was amplifying and validating her hate mail for two and a half hours already. 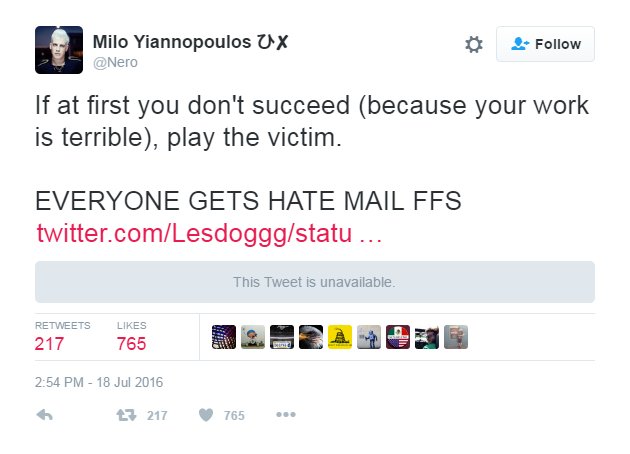 Tears of a clown

And here’s where Ghostbusters‘ PR team tipped their hand.

Director Paul Feig pushed a hashtag in support of Jones, which various news outlets used to tag their stories about her Twitter tantrum (and other celebs tweeting it led to followup headlines, as well):

Several hours later, Jones took a break from punching down and started monologuing. “I’m numb,” she lamented. “I feel like I’m in a personal hell.”

I don't know how to feel. I'm numb. Actually numb. I see the words and pics and videos. Videos y'all. Meaning people took time to sprew hate

I use to wonder why some celebs don't have Twitter accts now I know. You can't be nice and communicate with fans cause people crazy.

But I'm I that naive to think that some things was changing yes I was. We still live in a world where we have to say "black lives matter"

I'm not stupid to not know racism exists. And I know it will probably live on way after me. But we have to make people take responsibility

I feel like I'm in a personal hell. I didn't do anything to deserve this. It's just too much. It shouldn't be like this. So hurt right now.

And then, for her final farewell, Jones tweeted (at 1:20 AM, almost 14 hours into this public meltdown) that she was leaving Twitter “with tears and a very sad heart.” It all sounded a little ghostwritten (ahem) after a day of “Block Bitch” and “Look at the hate I’m the fuck out of this bullshit.”

I leave Twitter tonight with tears and a very sad heart.All this cause I did a movie.You can hate the movie but the shit I got today…wrong

Everyone’s lying, dumb, or both

The dominant narrative around left-wing tech sites today is that Milo “helped lead the abuse against Jones.” Vox Media’s The Verge said he “incited his followers to target her.”

Here’s a little industry secret: These people don’t fact check; they just run allegations as gospel if they sympathize with the person making the claim.

In this case, it was Jones, who, in between her tears, said Milo supported racists “sending me pics of gorillas.” “You’re cool with harassment?” she snapped.

@Nero pretty that you support racist sending me pics of gorillas. Is that how you get your readers thru hate? You're cool with harassment?

@Nero I'm hearing this guy is a columnist how sad. Is this how he gets his readers thru supporting hate? I'm acting like a victim? Nice job

And here’s another industry secret: dumb, English-degree tech journalists often write down their impressions of what people say instead of what people actually say. The best Jones could do was accuse Milo of “supporting hate.” Somehow that mutated into “inciting hate” on the pages of professional news sites.

These tech sites also failed to report that Jones directly incited harassment, telling her own followers: “I hope y’all go after them like they going after me” and “get her.”

Exposing I hope y'all go after them like they going after me pic.twitter.com/ojK5FdIA0H

bitch I want to tell you about your self but I'm gonna let everybody else do it I'm gonna retweet your hate!! Get her!!

By contrast, here’s what Milo did: 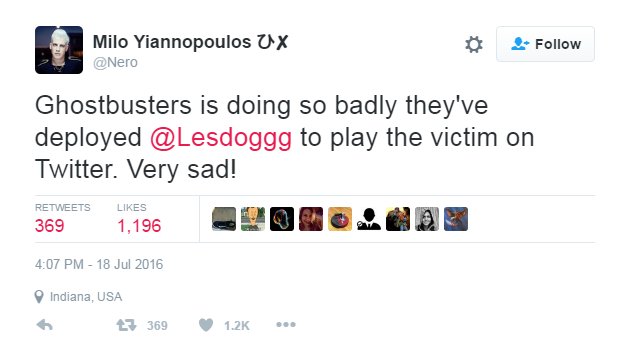 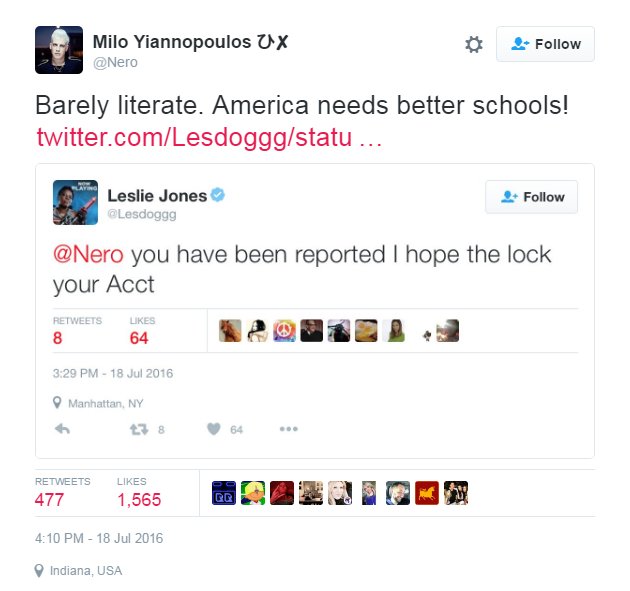 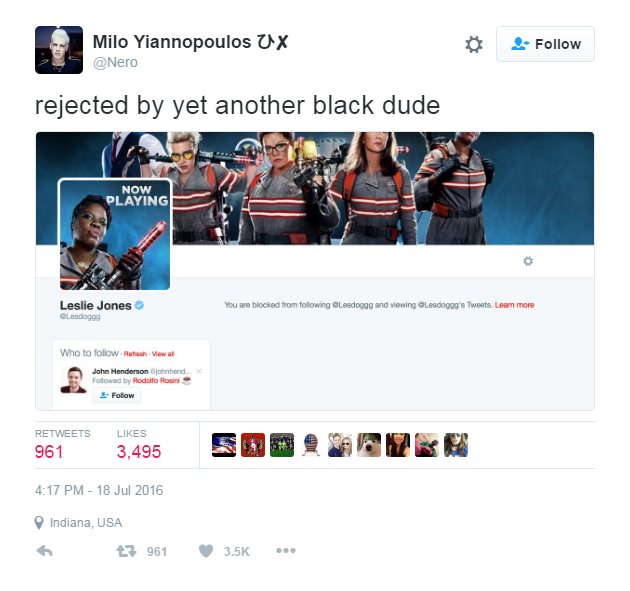 Jokes. Mockery. Heckling. Banter. None of these messages commanded his followers to do a thing, unlike Jones’ tweets.

However, in the words of a man who thoroughly triggered Leslie Jones, to “express different opinions from the elite” is the real sin in this story.