The comic strip sees Trump standing next to character Red Skull in a stand-off with Spawn, a chain-wielding anti-hero waging a war against Satan. Spawn beheads both Trump and the Nazi villain, Then he swaps their heads, putting one on top of the other’s body.

“That’s more accurate! And Donald, you look great again! If I do say so myself,” Spawn says, according to an image of the panel obtained by Bleeding Cool. 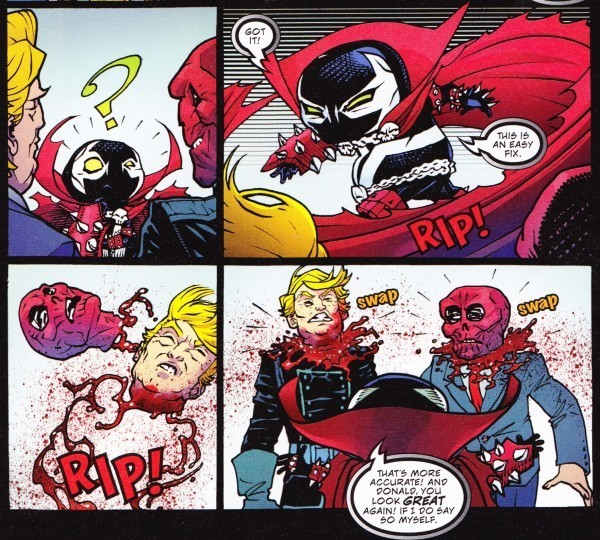 It’s the second time in as many months that the GOP White House hopeful has been the unflattering subject of a comic book series.

In Spider-Gwen Annual #1, Trump’s faced was superimposed onto supervillain Modok or M.O.D.A.A.K. (Mental Organism Designed as America’s King), a giant-headed villain with a tiny body on a mission to rule the world.

In May’s Issue No. 1 of Steve Rogers: Captain America, Red Skull delivered an anti-immigration speech before calling for a race war in defense of his evil empire Hydra.

“I have just come from Europe–my homeland, in fact,” Red Skull says to his minions. “And do you know what I saw there? It was an invading army. These so-called “refugees” – millions of them – marching across the continent, bringing their fanatical beliefs and their crime with them. They attack our women, and bomb our cities. And how do our leaders respond? Do they push them back and enforce the borders, as is our sovereign duty? Of course not. They say, ‘Here, take our food. Take our shelter. Take our way of life, and then take our lives.’ Despicable.”

As Breitbart previously reported, that issue of Captain America sought to equate criticism of the Syrian refugee crisis with Nazism.