In the race for votes, there couldn’t have been a starker contrast between the two campaigns. It was the juggernaut versus the buffoons.

The juggernaut was hands down the overwhelming favorite. Their campaign had an enormous funding advantage – a whopping three times more than the challenger. On the issues, it unabashedly portrayed Hispanics as victims, and placed amnesty and universal healthcare front and center –seamlessly aligning with the “global community.” The underdog challenger, on the other hand, was thought to be a bona fide laughingstock…with an approach that appeared destined to turn off conservatives. Its campaign thrived on crude language and insults, and even included shocking dick jokes, accusations of parent/child incest, and a wife with a penchant for posing nude – traits that grossly undercut its message of the importance of family. And the challenger took a diametrically different approach to the issues – showcasing the problems of our porous southern border and drug trafficking. But perhaps most notably, the media hated the challenger…with a passion. At the time the race started, the pundit class gave the favorite a 66% approval rating – the raunchy underdog a paltry 29%. So when early voting kicked off, you wouldn’t have been alone in thinking that the challenger was going to lose in a historic landslide. But as the numbers started rolling in, the two were inexplicably neck and neck.

Then something surprising happened. Conservatives put the crass and lewd behavior aside, and began to rally around the underdog – unbelievably buying into the campaign’s family shtick. Through the glass shattering shrieks of the elite pundits, the challenger found an audience in the South and Midwest. In the end, when all of the American votes were tallied up – to the astonishment of anyone paying attention – the underfunded, lampooned challenger defeated the juggernaut. The critics couldn’t have been more wrong.

Of course, you may think I’m talking about Donald Trump vs. Hillary Clinton, but you’d be mistaken. The above traces the battle between two movies – Elysium and We’re the Millers – and highlights a systemic media problem that has also reached into the film industry. Simply put, media critics are as miserably out of touch with Middle America as their political pundit brethren.

The 2013 battle between the dystopian blockbuster-budgeted Elysium and the lowbrow hit comedy We’re the Millers – both launching in the same week – bares a striking resemblance to the 2016 presidential election campaign. Both events reveal a troublesome media bias. But where liberal politicians profit from this slant, the U.S. movie industry does not.

Although U.S. box office revenues have grown annually – due solely to increased ticket prices – domestic ticket sales have been on a steady decline. From a height of 1.58 billion domestic tickets sold in 2002, that number has decreased by over a quarter of a billion tickets in 2016. 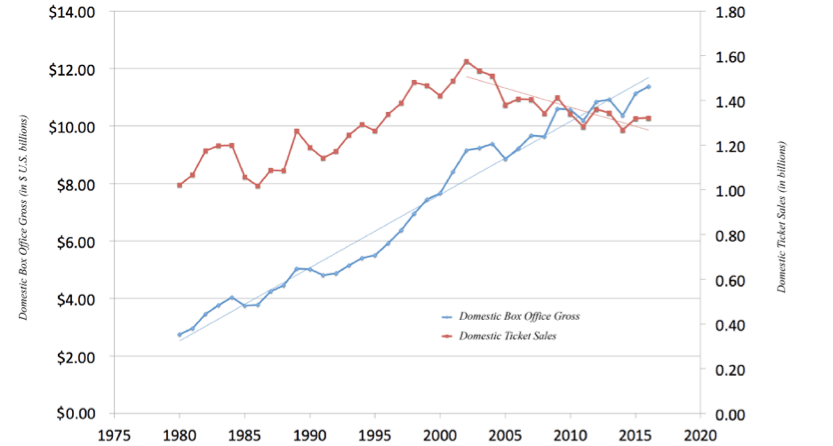 And this decrease surprisingly comes with an increase in both the number of U.S. movie screens and the number of films being made each year. 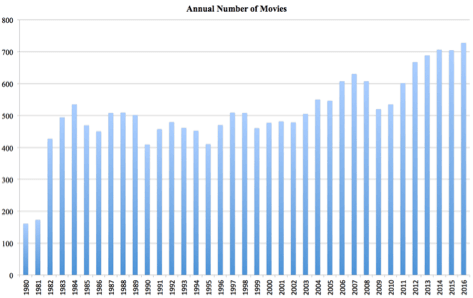 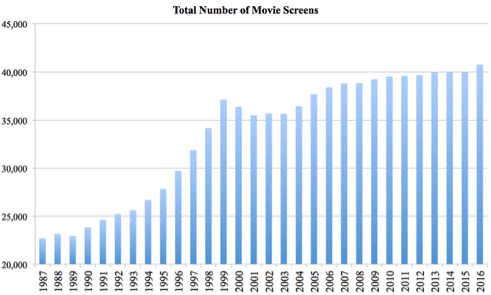 The U.S. film industry is spending more money but getting decreasing returns at home. The lazy response is to blame the trend on technology. But this downward slide predates the popularity of YouTube, smartphones, AppleTV, cheap flat screens, the rise of social media, streaming NetFlix, Amazon Prime, Hulu, and the Great Recession. So, why is this decrease in U.S. ticket sales happening?

The answer in part lies in two creeping ideologies that were on full display during Meryl Streep’s Golden Globes tirade – liberal elitism and globalism. Nothing shows this better than Rotten Tomatoes.

Most moviegoers are familiar with the film review aggregator Rotten Tomatoes, but how the site works is lesser known. It’s pretty simple: the editors collect a movie’s reviews from their list of approved critics, decide whether each review is positive or negative, then calculate the percentage of positive reviews to establish the movie’s Tomatometer score. If the percentage of positive reviews is 59% or lower, the movie gets the dreaded green splat icon. If the movie receives 60% or higher, it gets a red tomato icon. And if the movie reaches 75% positive reviews with a few other caveats, the movie receives the coveted Certified Fresh tomato icon. Notably, if a critic or publication isn’t on the Tomato-approved list, their film review doesn’t go towards a movie’s Tomatometer score. So, the only reviews that “matter” come from the site’s approved list.

Rotten Tomatoes has over 470 approved film critics, and over 360 approved entertainment publications. As a result, it represents a snap shot of the entire film critic industry and has become an influential force in the movie business – so much so that in 2015, movie studios started using their Tomatometer scores instead of individual critic quotes to sell its flicks. Look up a movie on Google, and the search results automatically highlight the movie’s Tomatometer score. Go to buy or rent a film from AppleTV, and you are hit with either the movie’s red tomato icon or Rotten green splat. To the industry, Rotten Tomatoes is the Hollywood media.

Although their scores frequently align with audience ratings, they are all too often at complete odds with the general public’s opinion. This disconnect lies in the way Rotten Tomatoes creates these scores – namely, the Tomato-approved critics that feed a movie’s score are overwhelmingly liberal and international. Right-of-center voices are grossly underrepresented. That’s why unexpected conservative hits like We’re the Millers often get annihilated by Rotten Tomatoes’ scoring system.

“Ninety-nine percent of the people who go into my profession are left-of-center,” says Christian Toto – an openly right-of-center movie critic, former Breitbart News contributor and purveyor of movie industry site HollywoodinToTo.com. “Every main website that covers Hollywood has a bunch of critics, and they’re all liberal and they all use that in their reporting.”

It’s not hard to see this bias when looking at the scores of movies with blatant right-wing themes. Conservative filmmaker Dinesh D’Souza’s documentary 2016: Obama’s America could only muster 32 Rotten Tomato-approved reviews and received a green splat with a dismal score of 25%. Plenty of movies get poor scores, but this was the second highest grossing political documentary since the early 80s. D’Souza’s most recent flick – Hillary’s America – received an almost unheard of 4% Tomatometer rating. By contrast, Michael Moore’s pro-socialism box office flop Capitalism: A Love Story received a shiny Certified Fresh rating of 75% by 178 Tomato-approved reviewers. It pays to be a liberal filmmaker…but in this case, at the expense of studio profits.

To quantify Hollywood’s liberal and foreign media bias, I extracted all of the Tomato-approved Critics & Publications listed on Rotten Tomatoes website. These are the individuals and outlets provided the special privilege of having all of their movie reviews eligible to count toward a movie’s Tomatometer rating. For example, any movie reviewed by liberal media outlet Buzzfeed, of #fakenews #GoldenShowers fame, is included in the Tomatometer rating of a movie. By contrast, outlets like FoxNews.com and Breitbart News, two of the most highly trafficked conservative outlets on the web, only allow movie reviews by specific critics to count towards a movie’s score. As is often the case, the approved movie critic no longer writes for the outlet – making the site effectively non-existent in Rotten Tomatoes’ world.

When looking at U.S. Tomato-approved publications that contributed to 2016 Rotten Tomatoes ratings, the liberal bias is glaringly apparent. 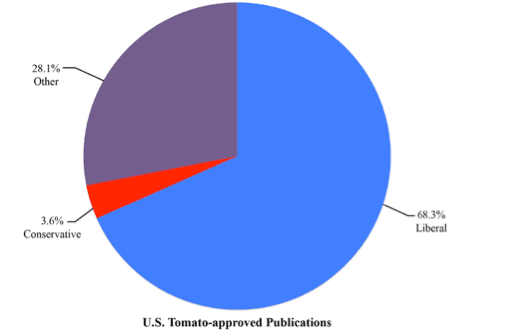 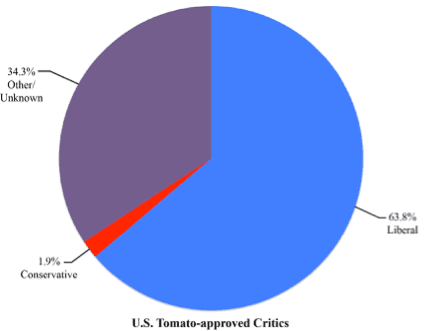 Liberal outlets outnumbered conservative outlets by a ratio of 19:1!* For U.S. Tomato-approved critics, the ratio was even more pronounced. Liberal critics outnumber conservatives by roughly 33:1!** A bias this obvious could even make CNN blush. But for the U.S. box office, this is a problem…a big problem.

Ticket sales can be thought of as votes. Studies have shown that voter turnout is depressed with negative campaigns. Analogously, when liberals give negative reviews to movies that don’t align with their sensibilities, ticket sales get depressed. And the data shows this effect.

“A film makes the majority of its box office in the first three weeks in theaters,” a studio executive recently told me. This is the all so critical box office window. Ticket sales typically drop off from the highs of an opening week. But as the data shows, films with low critic aggregator ratings see a substantially larger drop off in ticket sales during week-two of a theatrical release – as much as 15% more. With the Hollywood media’s obscene liberal slant, it isn’t just crappy or overtly conservative movies that suffer. Films with unexpected conservative appeal, that are unable to break through like We’re the Millers, are undoubtedly hurt at the box office.

The problem with Hollywood’s media bias is compounded when you add in Tomato-approved foreign critics. Rotten Tomatoes not only favors liberal voices, it places international opinion over that of conservatives…by a wide margin. 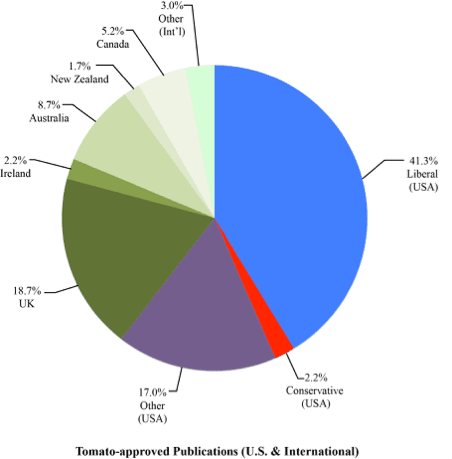 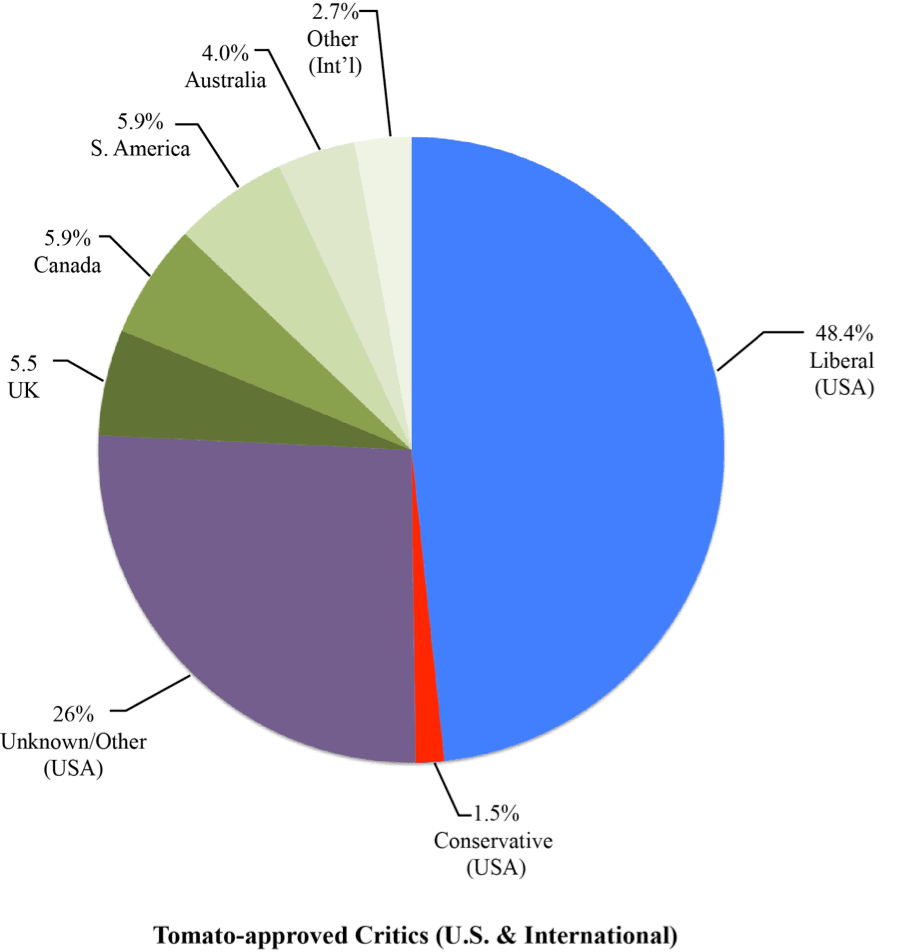 The voice of U.S. conservatives falls far behind the UK, Australia, Canada, and South America. And this is probably by design. The film industry’s shift towards globalism coincides exactly with the decline of the U.S. box office. 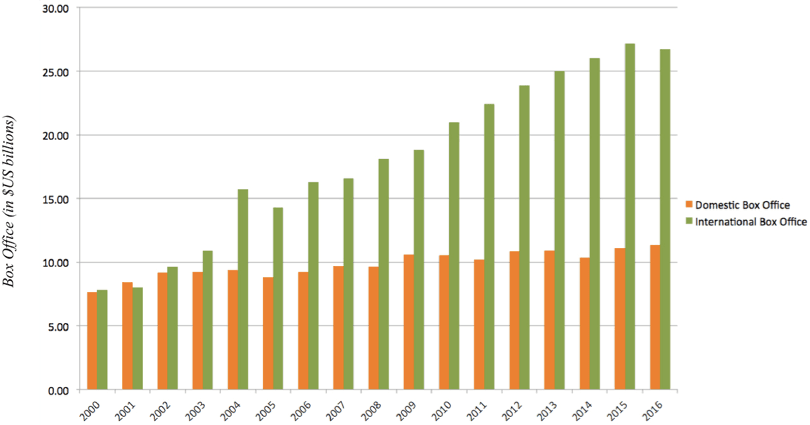 A focus on making movies that are more palatable for an international audience – like Elysium – combined with liberal and foreign media dwarfing conservative voices, has likely played a critical role in decreased U.S. ticket sales – to the detriment of U.S. theater chains. Globalism and liberalism claim another victim.

Many in Hollywood are no doubt fine with these overt biases. Some have even expressed a desire to ramp it up. But if the box office of Miss Sloane (anti-gun) or Ghostbusters (anti-men) have shown anything, it’s that conservatives have a way of sniffing out liberal and globalist propaganda…and will eventually help kill a movie’s potential. Miss Sloane received a respectable 69% Red Tomato score, and Ghostbusters a Certified Fresh rating with 73%. Moviegoers didn’t buy it. Both flopped. Conservatives are onto Hollywood’s tricks.

Tinseltown should recognize the economic impact of its enormous diversity problem. The industry should push sites like Rotten Tomatoes to improve its model. If they deny having a problem, speak their language and show them this statistic. 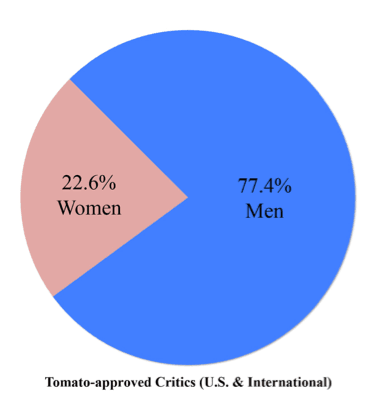 And most importantly, Hollywood should turn to us right-of-center plebeians for help in creating and promoting its content. Because if it continues to ignore us – or worse, patronize us – only time will tell how low the U.S. ticket sales will fall. And who wants to test that bottom?

Patrick Courrielche is a cultural commentator and co-founder of Inform Ventures — a marketing / promotions agency that helps connect products with audiences. He can be followed on Twitter @courrielche.

* An outlet’s political worldview was identified by how it handled politicians and/or addressed political “hot button” issues. Searches were run on all Rotten Tomatoes U.S. Tomato-approved Publications that affected 2016 Tomatometer ratings, looking either for presidential endorsements, the outlet’s self-confessed political affiliation, or how it handled political firebrands. If the publication consistently praised Michael Moore, Lena Dunham, climate change or a list of other liberal-friendly topics, and/or ridiculed Dinesh D’Souza, Ann Coulter, the Second Amendment or a list of other conservative-friendly topics – their political affiliation was considered reliably liberal. And visa versa for the opposite. If this evaluation did not result in a clear bias, the outlet was placed in the “Other” category.

** A critic’s political worldview was identified through evaluation of their social media accounts and published opinions. Searches were run on all of the Rotten Tomatoes U.S. Tomato-approved critics that affected 2016 Tomatometer ratings, looking either for presidential endorsements, or clear bias towards either the liberal or conservative candidates. If this evaluation did not result in a clear bias, couldn’t neatly be categorized as liberal or conservative, or if the critic didn’t either have social media accounts or didn’t clearly indicate their political affiliation through opinion pieces, the critic was placed in the “Other/Unknown” category.