The owners of the New Mexico house featured in the television show Breaking Bad installed a fence to keep fans from throwing pizza on their roof.

The Albuquerque homeowners installed the fence after people reportedly pelted their home’s roof with pizza, reenacting a scene in the popular AMC series when drug lord Walter White threw a pizza on top of the garage:

The homeowners claim that visitors have not only thrown pies on their roof, but also attempted to steal rocks from their property as souvenirs.

Joanne Quintana, the homeowner’s daughter, said that so many tourists have frequented her house that she has lost count.

“They feel the need to tell us to close our garage, get out of the picture, you know — tell us what to do on our own property,” Quintana told KOB4.

Quintana said that her mother finally decided to install a six-foot-high iron fence to keep unruly tourists from vandalizing their property. 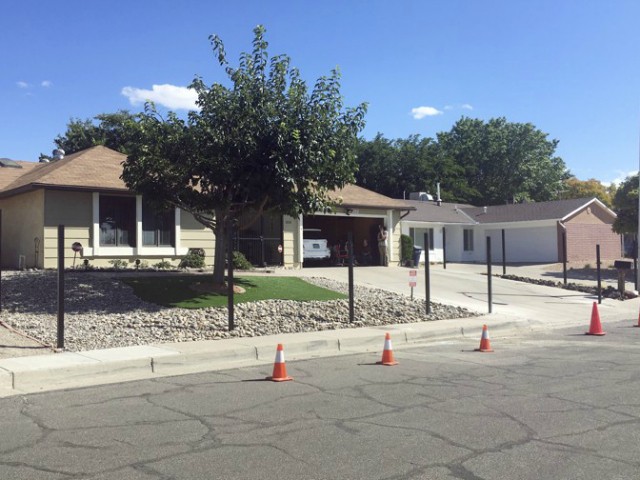 The house used in the AMC-TV series “Breaking Bad” with poles for a new fence is shown in this Friday, Oct. 13, 2017 photo in Albuquerque, N.M. Photo Credit: AP

“We feel like we can’t leave because when we do, something happens and that’s ridiculous,” Quintana said, adding that visitors have already attempted to go around the construction to get a better picture.

The house appeared in the series as the Whites’ residence. The pizza-throwing became such an issue for the homeowners and the neighbors that Vince Gilligan, the show’s creator, begged fans to stop recreating the scene.

“We’re hearing from her that folks are wandering onto her property, and they are being rude to her when she comes out, when she basically says to them, ‘You’re on my property,’” Gilligan said on the Better Call Saul Insider podcast. “And they’re throwing pizzas on [the] roof and stuff like that.”

“There is nothing original or funny or cool about throwing a pizza on this lady’s roof,” Gilligan said. “We love our fans, but we don’t love those fans. I don’t even consider them fans.”