NEW YORK (AP) — Just days before the Super Bowl, John Mellencamp sank to his knees in support of the Black Lives Matter movement after performing a political ballad on the “Late Show With Stephen Colbert.”

The singer-songwriter sang the violin-and-piano dirge “Easy Target,” with the lyrics “In the street and the gutters/ The cotton fields in this land/ Here’s an easy target.” At the end, he knelt and lifted his right fist into the air.

Former 49ers quarterback Colin Kaepernick started the kneeling movement at the national anthem to protest racial inequality and police mistreatment of black males. The protests prompted President Donald Trump to say players should be fired for not standing during the anthem. 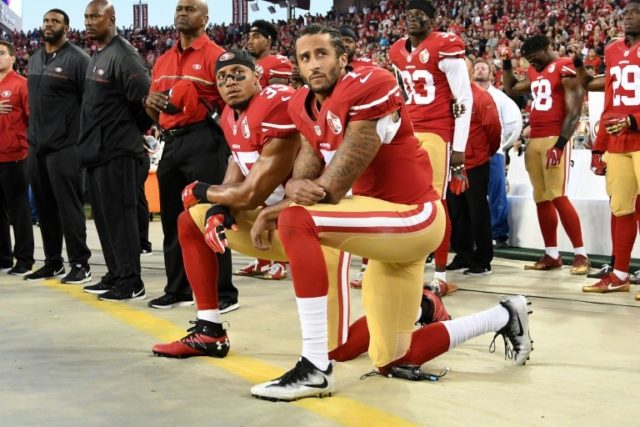 Colin Kaepernick and Eric Reid of the San Francisco 49ers kneel in protest during the national anthem prior to playing the Los Angeles Rams in their NFL game at Levi’s Stadium on September 12, 2016 in Santa Clara, California. Getty/AFP/File Thearon W. Henderson

“Taking the knee started purely and simply as a protest of racial and social injustice,” Mellencamp told The Associated Press. “Sadly it was politicized by the current administration. The song is simple and the protest is pure.”