On every important front, director Eli Roth (working off Joe Carnahan’s script) has his heart in exactly the right place. If present-day critics were hoping for some kind of apology for the five previous Death Wish entries (1974-1994), for an unholy act of revisionism to cater to America’s increasingly censorious film elite, they will be disappointed (Rotten Tomatoes confirms this). Unfortunately, so will anyone looking for a satisfying revenge thriller.

As Paul Kersey, Bruce Willis steps in for the iconic Charles Bronson as the man undone by the shattering of his family. Roth updates the story in two smart ways. Kersey is now an emergency room surgeon instead of an architect. Rather than set the action in the gentrified world of post-Giuliani New York (which would make no sense today), events unfold on the killing fields of Chicago.

Other changes are not so good. Roth’s Kersey is mild-mannered but apolitical, oblivious to everything but his immediate world. He makes a good living, loves his wife (Elisabeth Shue), and is dealing with the fact that his daughter Jordan (Camila Morrone) is on her way to college. Bronson’s Kersey was a bleeding heart leftist, a pacifist to the point where he claimed conscientious objector status in Korea. The loss of this inner-conflict is a big one.

As expected, the unthinkable happens to the Kersey family. The police (Dean Norris and Kimberly Elise) are overworked and useless — and Dr. Kersey…? Well, he goes a little mad.

One insurmountable problem is that Roth does not seem in the least interested in delivering what the story demands — a gritty, intense revenge thriller. What we have here is a cheap horror movie. Kersey is not so much a suburban family man haunted by the atrocities committed against his family and driven to vengeance by government impotence as he is Jason Vorhees  — a killer in a hoodie looking for nifty ways to off the next customer. By the time the bowling ball arrived, I pretty much gave up.

Death Wish also has no sense of place. Other than overhead establishing shots, the movie screams Canada. Who knows how much was actually filmed in Montreal, but a safe guess is every scene that matters. How was this allowed to happen? Just as New York was in 1974, Chicago is a failed city buried in urban decay — which means there are countless locations, perfect locations. Rather than take advantage of that, we end up with a flat, cheap, generic feature that looks and feels like a TV movie … a Canadian TV movie.

Finally, there is no emotional through-line. Although critics loved to ridicule “wooden Indian” Bronson, through his impossibly narrow eyes, it was always all there. Bronson’s Kersey (in the original) was an emotionally tortured everyman driven to violate everything he believed in out of a sense of desperate helplessness. If you recall, he was not even seeking revenge. The thugs who murdered his wife and gang-raped his daughter into madness, were never seen again. The “death wish” was Kersey’s own, his need to recreate the moment where he lost his family — to stop it this time. Bronson was shatteringly effective in the role. 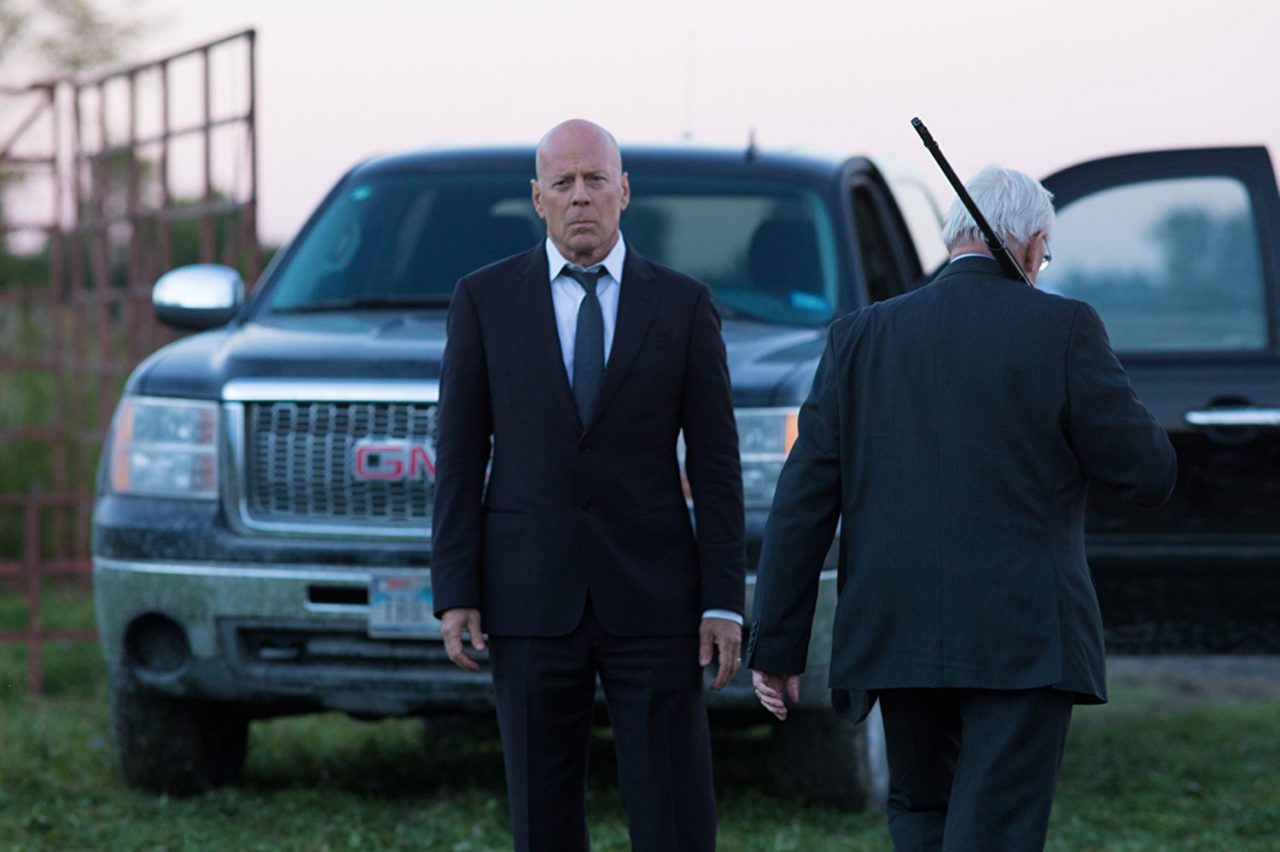 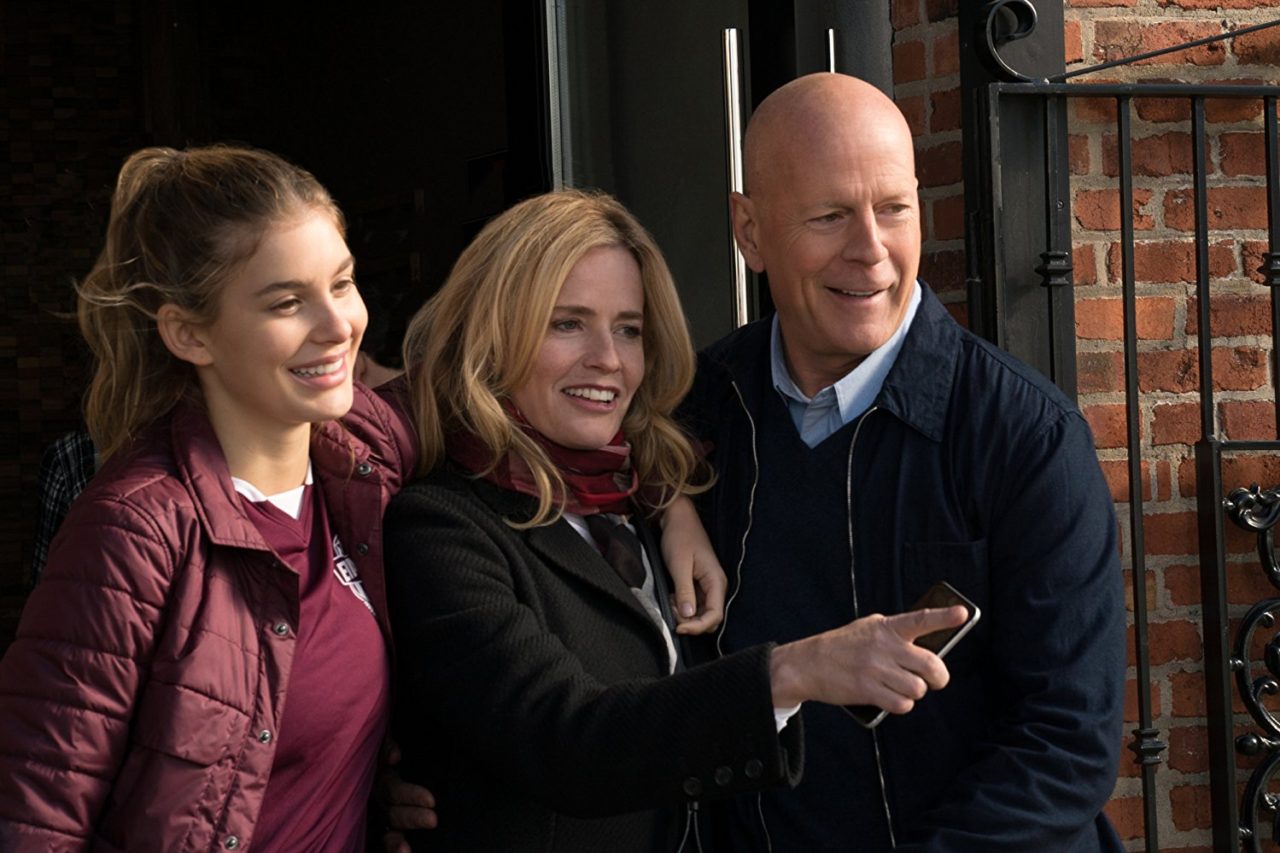 Willis, who has proven in movies like Unbreakable (2000)  that he can carry any movie he takes seriously, is either let down by himself, his director, or his script. One moment he’s devastated — the next, smirking like John McClane; the next, torturing a guy for the lulz; the next, killing with a quip. Sorely missing is the emotional focus and intensity this genre requires (see: Wick, John).

Laugh all you want at the four Death Wish sequels, what makes them insanely rewatchable (especially Death Wish II — my personal favorite) is Bronson’s iconic presence and stoic furor. At times I couldn’t tell if Willis’s Kersey wanted revenge or to be a YouTube star.

Carnahan’s plot is choppy and filled with gaping holes. There is a fairly tense scene where we are led to believe the police have arrived to arrest Kersey, who is trapped in his own home. Then, and only because the plot demands it, the cops walk away murmuring something about a lack of evidence. This is not only a shockingly lazy piece of screenwriting, the tension evaporates.

Nevertheless, as it was with his much-superior cannibal extravaganza, the epic Green Inferno — an act of true Hollywood rebellion that mercilessly exposed the counterfeit do-gooders in the environmental moment — Roth again pokes his finger in the eye of the intolerant left. Death Wish really should be rated TWS — or “Trigger Warning Snowflakes,” because Roth has a lot to say, and — God bless him — all of it is “incorrect” by today’s increasingly prudish PC standards.

If you take a long look around at pop culture today, Individualism is dead. On television, via Law & Order, CSI, NCIS, Hawaii Five-0, S.H.I.E.L.D., Blue Bloods, Criminal Minds, etc,. we have returned to the Jack Webb era where government is America’s brave and competent hero. What the hell happened to the Individual, to the one guy, to the Jim Rockfords and Harry Os screaming about their rights and fighting the bureaucracy?

Movies are even worse. On the big screen we have surrendered our Individualism and our precious civil rights to genetic freaks and billionaires — to Wolverines and Supermen and Batmen and Iron Men. Worse still, while these guys at least start out as Individuals, in the end they always sell out to assemble or to *eye roll*  join a league. My God, I miss the seventies… Five Easy Pieces, Jeremiah Johnson, Night Moves…

As flawed as Death Wish is, Roth at least tells the truth. Kersey’s family is demolished in a gun-free zone (his home), Chicago’s un-American gun laws only benefit the criminal, the government cannot help you, the collective will never help you. So you gotta become an Individual and then do what a man’s gotta do. Death Wish is “woke” in all the right ways.

In the wake of the Parkland school massacre and our corporate establishment’s corrupt reaction to it (deflecting from the government incompetence and lack of school security that made it possible by demonizing individual rights), Death Wish is a perfectly timed public service announcement for the NRA and the importance of owning firearms.

Roth even tweaks the prudish squares with a jab at a sacred cow using Trayvon Martin’s hoodie.  And it is glorious.

Death Wish might not succeed at its primary job, but Roth does take his mission as an artist seriously. Art must challenge power, must be attacked as “inappropriate,” must subversively offend and outrage the priggish establishment. That is one landing Death Wish manages to stick.