The stakes in director Steven Spielberg’s Ready Player One are pop-up ads. Seriously.

The year is 2045 and the world has dramatically changed over the last 27 years. To give you an idea of just how much, think back to how different the world was in 1991 (oh, wait, it’s so not different that Twin Peaks, Murphy Brown, 60 Minutes, Law & Order, and Roseanne are still on the air ). Anyway, overpopulation is such a problem that poor people are forced to live in something called The Stacks — a highly ineffective housing system where dozens of mobile homes are stacked one upon the other.

Within these stacks, humanity escapes their terrible circumstance through the virtual reality glasses that allow them to live fulltime in the OASIS, a seemingly limitless video game world where anything is possible.

Everything changed in the OASIS after the death of its creator James Halliday (Mark Rylance — doing an awesome impression of Dana Carvey’s Garth). Like a CGI’d Willy Wonka, Halliday remains in the OASIS where he hosts a contest that includes three golden tickets in the form of keys hidden somewhere within his vast creation. The lucky Charlie who finds those keys will win ownership of the OASIS.

Control of the OASIS means control of…

And now we come to one of the movie’s biggest problems. The stakes are nonsense. We are actually supposed to care that Nolan Sorrento (Ben Mendelsohn), CEO of IOI (the second largest corporation in the world), wants to win control of the OASIS so he can make money by … placing … ads … in the … OASIS.

Let me boil Ready Player One down for you… It is as if the CEO of Netflix died and offered his company to whoever wins a Mortal Kombat tournament. Enter Bill Gates, who uses all of his corporate power to win the tournament so that he can interrupt all those Netflix shows with Microsoft ads.

Not exactly a Bwahahahaha. 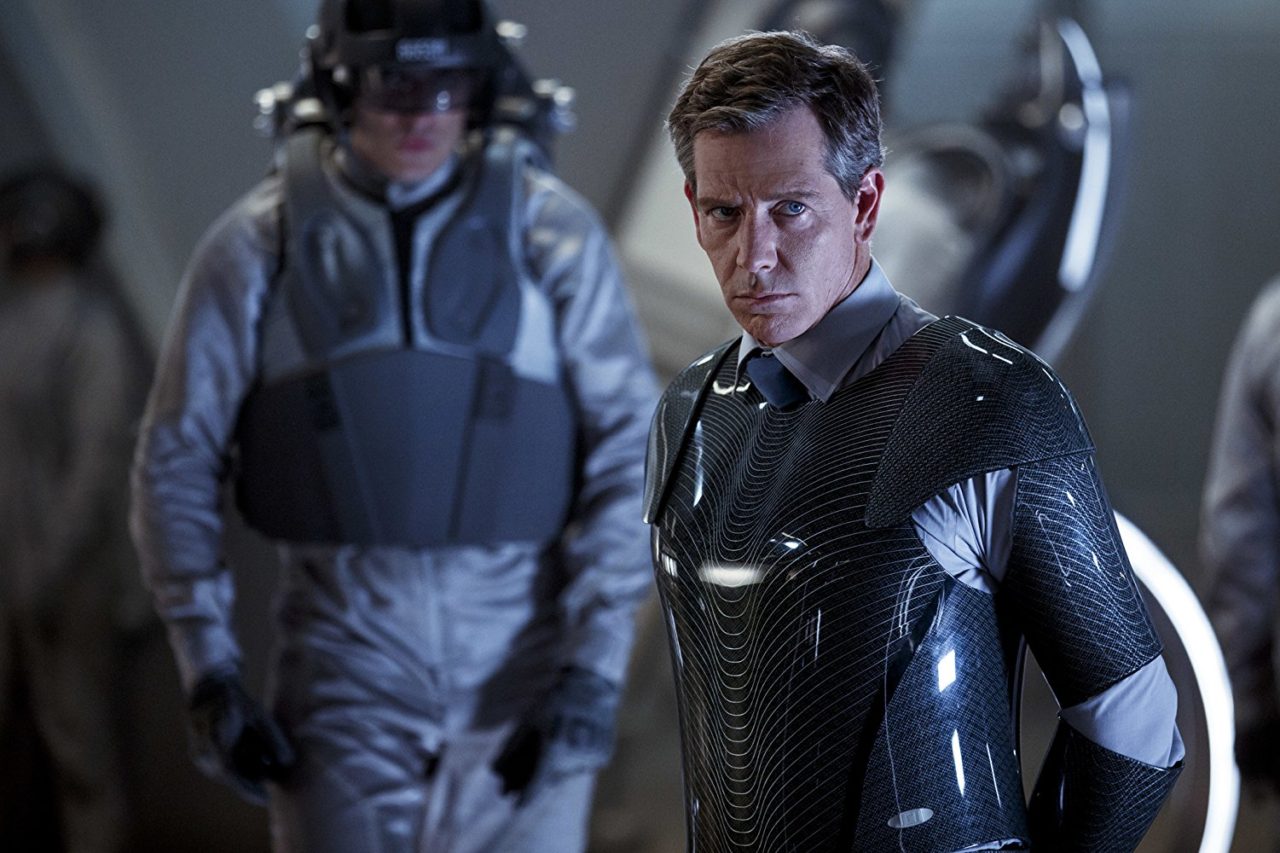 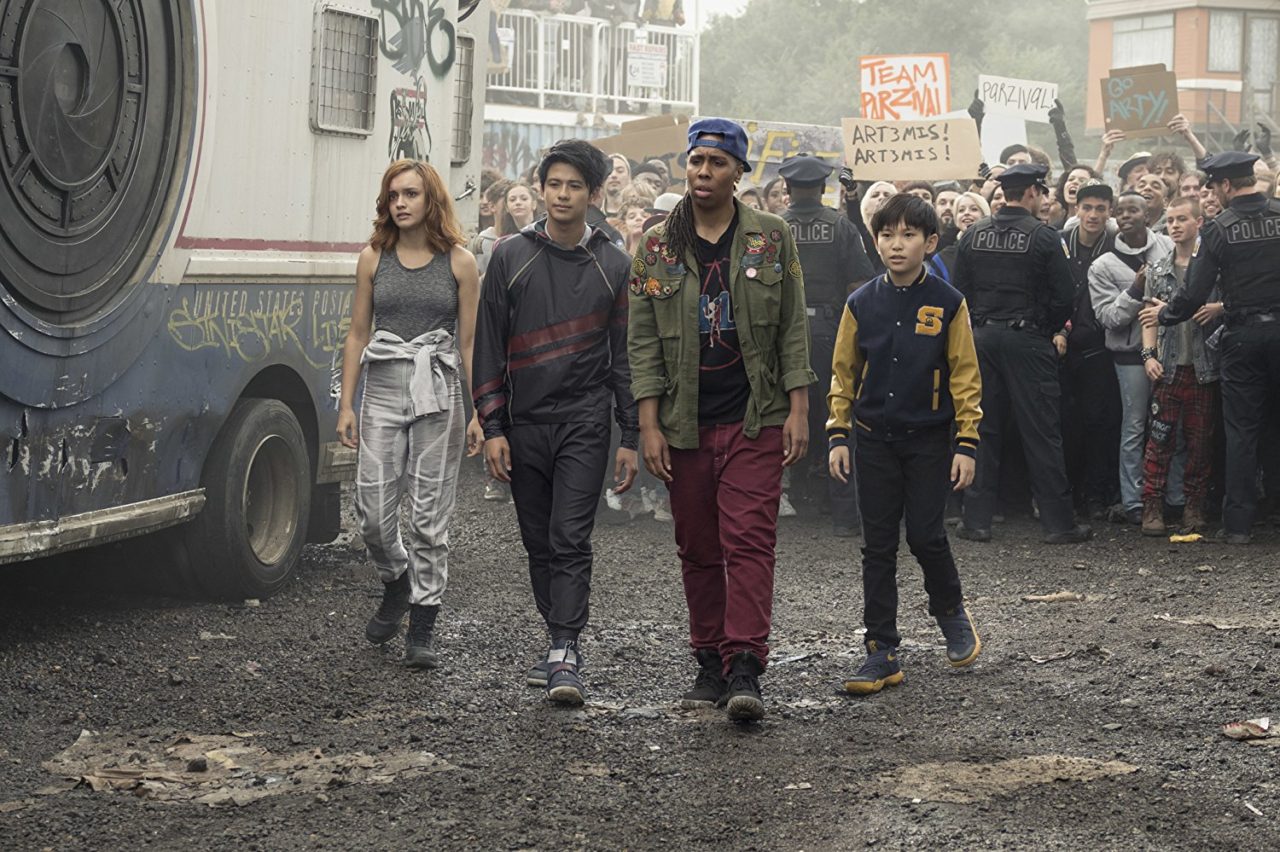 As far as empathizing with the so-called underdogs in the Stacks, to be perfectly honest, a big part of me was thinking throughout, “Maybe if these sorry assholes put down the VR glasses and do something with their lives, their lives won’t be so miserable.”

You sit in a trailer all day watching 3-D TV and I’m supposed to feel sorry for you?

Sorrento might be a jerk, but at least he works for a living.

And Sorrento really is a jerk, not so much because he wants to place ads in the OASIS, but due to the lamest corporate security system ever. Anyone can break into his office. And I do mean anyone.

Man alive, this movie is dumb.

And these are the least of the script’s problems and plot holes, holes so big an Iron Giant riding the Millennium Falcon could zip right through them.

Our Dystopian hero is, naturally, a teenager — oh, and an orphan to boot (this is a Spielberg movie). His name is Wade Watts (Tye Sheridan) and his deep knowledge of the minutiae of pop culture — most especially from the ’80s — puts him in a front pole position to win Halliday’s contest. Which is another problem…

Halliday, who we are supposed to empathize with (in flashbacks) as a geek who never found his emotional place in the real world, is arbitrarily handing the keys to the most powerful company in the world over to any sociopath, serial rapist, child molester, or Nolan Sorrento, who has the most joystick and Trivial Pursuit skills.

The movie itself tells us that our knowledge of John Hughes’ movies and old Atari games is a moral virtue, not just through the blander than bland character of Wade Watts, but in the mindlessly shallow way Spielberg wants us to pat ourselves on the back every time we recognize one the endless cultural references that fill the screen.

Ready Player One spends most of our time in the hyper-CGI’d world of the OASIS where Wade’s avatar Parzival is desperately trying to win the contest. Here he meets Art3mis (Olivia Cooke) a famous Gunter (don’t ask) who eventually becomes his love interest. 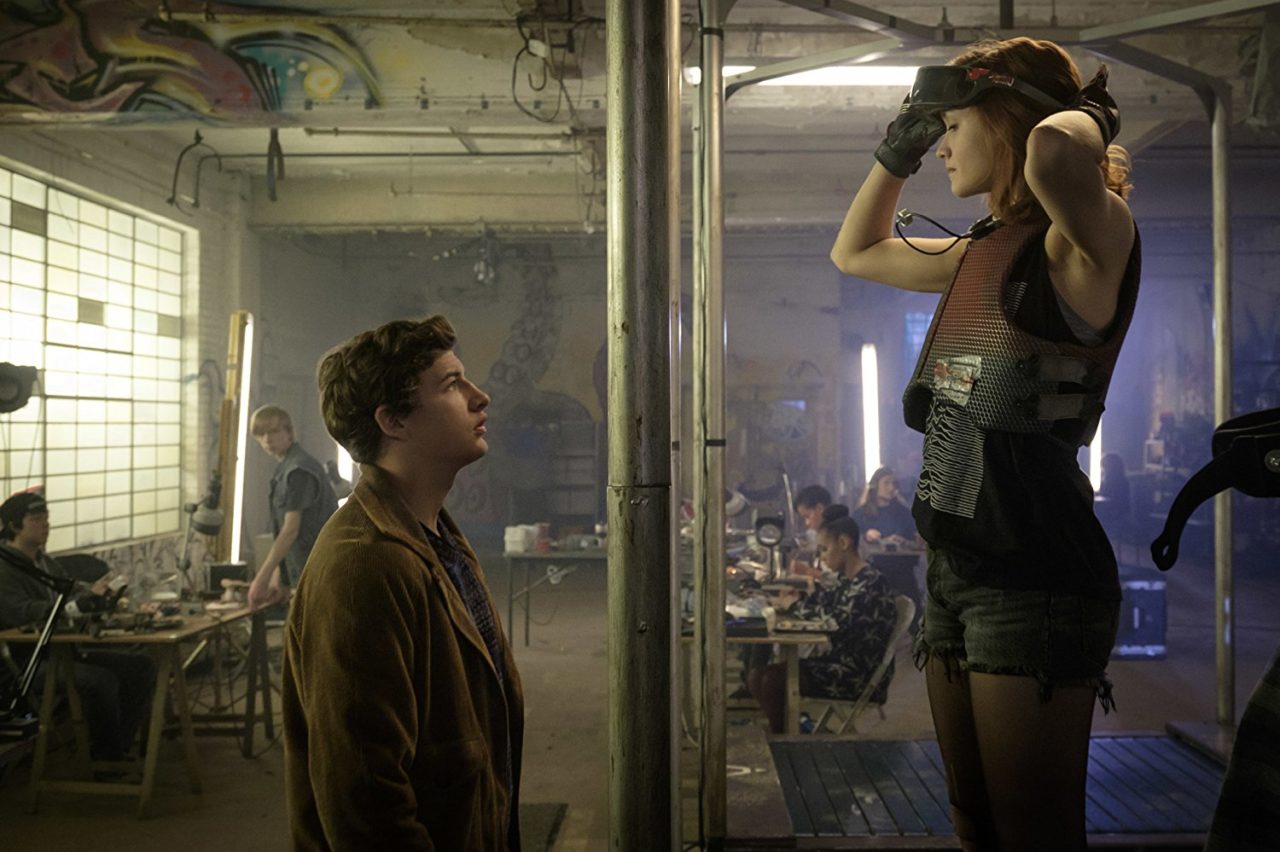 In the real world Art3mis is Samantha Cook, a member of the resistance desperate to keep the OASIS out of IOI’s hands (cuz pop ads are sooo annoying). At one point, when they meet up in the real world, Samantha says to Wade, “Welcome to the revolution,” and this is where we expect to enjoy a tour of the revolution, except there really isn’t a revolution, but that line sure sounded great in the trailer.

Oh, and we are supposed to feel sorry for Samantha because of a birthmark no darker than a mild sunburn circle on one of her eyes. Sure, she still looks like Olivia Cooke, but poor thing…

Spielberg’s only achievement is making a sci-fi movie dumber than Elysium, but that Matt Damon dud at least offered some real stakes and decent world building. The OASIS is a smoldering garbage pile of CGI, a frenetic video game filled with pops of pop culture.

If that is not exhausting enough, there are no rules in the OASIS, and therefore there is no tension. People conjure up whatever weapons they need, gravity is not an issue, and the worst that can happen is a Game Over — so, you know, you go right back in.

If recognizing the Mach 5 and RoboCop give you a sense of self-satisfaction unavailable to you in mom’s basement, this movie is for you. For the rest of us, the entire experience is numbing and uninvolving, like watching a middle-aged man play a video game for 140 minutes.

Without giving anything away, the movie’s last few minutes might be the most morally bankrupt ever put on film.

Ready Player One is nothing less than an exercise in toxic metrosexuality.