Hollywood actress Jodie Foster said she would be “much more comfortable having robots” own a gun than an emotional human doing so.

“I mean, I’d be much more comfortable having robots have them, but we are designed to have emotions that overflow and that are not guided by our heads,” the Hannibal star said in a recent interview with Indie Wire.

“To have sentient beings that are completely and entirely guided by their emotions have the power to administer life or death using one kilowatt of energy in a nanosecond is just unfathomable with me,” Foster added.

Foster is promoting her latest movie, Hotel Artemis, in which she plays a nurse who treats a gun shot victim who was shot in a gun-free zone — the kinds of places that have 100 percent gun control and are magnets for mass public attackers. The IMBD parental guide for the star-studded crime thriller says the film show “guns, most of which were apparently ‘printed’ at Hotel Artemis, [that] are brandished and fired,” brutal axe attacks, people “slaughtered” with a scalpel, and others killed by being injected with medicine intended for elephants. 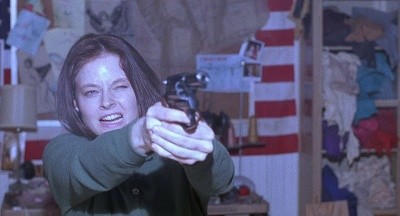 The two-time Oscar winner began her public advocacy for gun control after starring in the 2007 drama The Brave One, a movie in which Foster’s character acquires a handgun for defense of herself and as a means of getting revenge against the men who killed her husband.

Foster called for more gun control, ironically, as she starred in the role, telling More magazine at the time, “Isn’t it possible that we all have that bit of insanity in us? That’s why I’m for gun control.”

The veteran actress told Indie Wire she understands owning a gun for hunting, but beyond that she finds little justification for it.

“It’s not my personality to believe that celebrities have the expertise to try to influence other people’s ideas or their feelings, politically,” Foster said.