This year’s Met Gala theme at New York City’s Metropolitan Museum of Art was “Camp: Notes on Fashion,” as in Grace Jones, drag queens, Elton John, and Madonna — not the Boy Scouts.

And while Hollywood’s biggest celebrities camped up their usual appearances, far too many of them looked less like theatrical creations and more like attention-seeking wannabes. Here, I break down the 2019 Met Gala’s best and worst dressed.

Lady Gaga came to the Met Gala ready to not only show off four separate looks but to set scenes for them as well. Camp? Yes. Cool? Not really.

Gaga’s only look that really impressed me was this “Saved by the Bell” hot pink satin gown by Brandon Maxwell that featured a giant pair of bedazzled shades — the good bougie ones that cost $10 bucks but look like $100 — and none other than a brick phone from 1995. She should have arrived in this look and stayed in it all night. As you scroll down, you’ll know why. 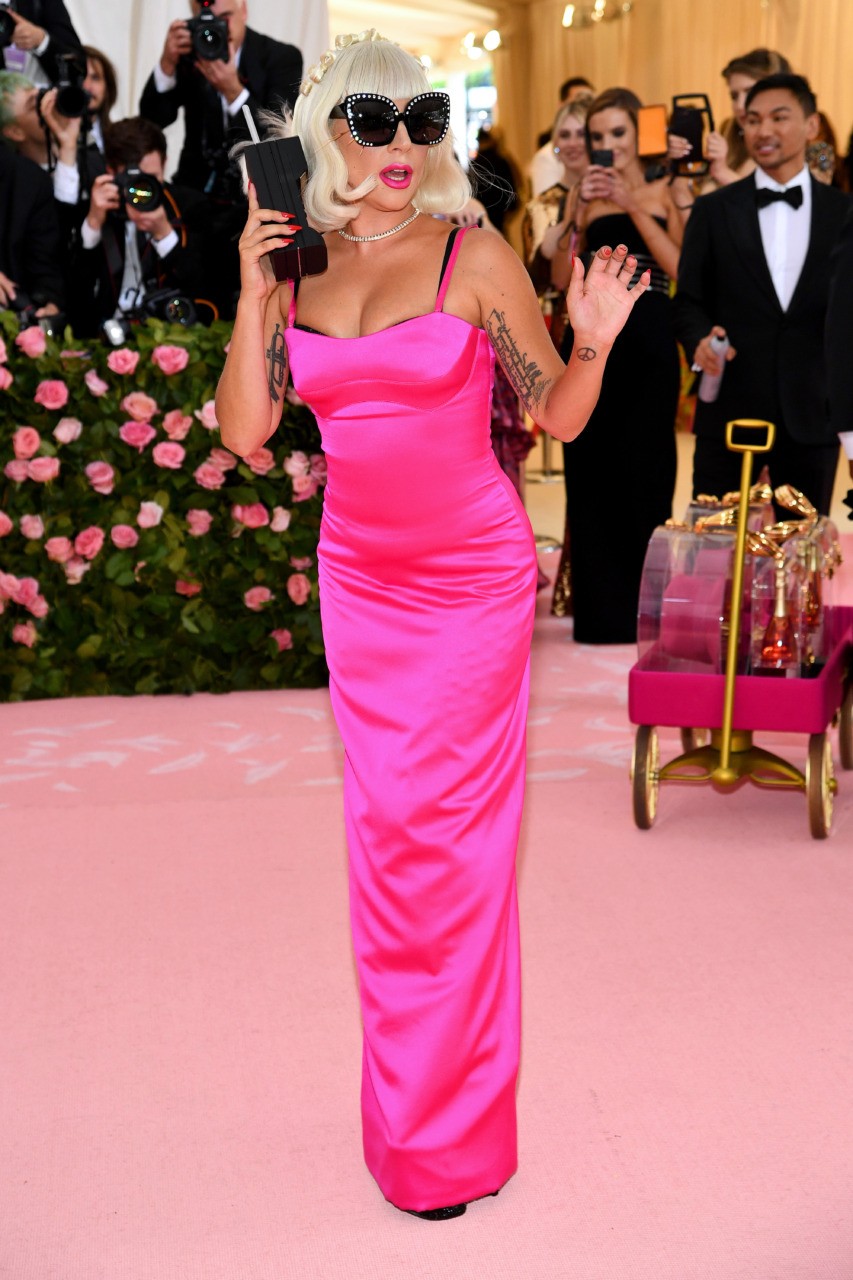 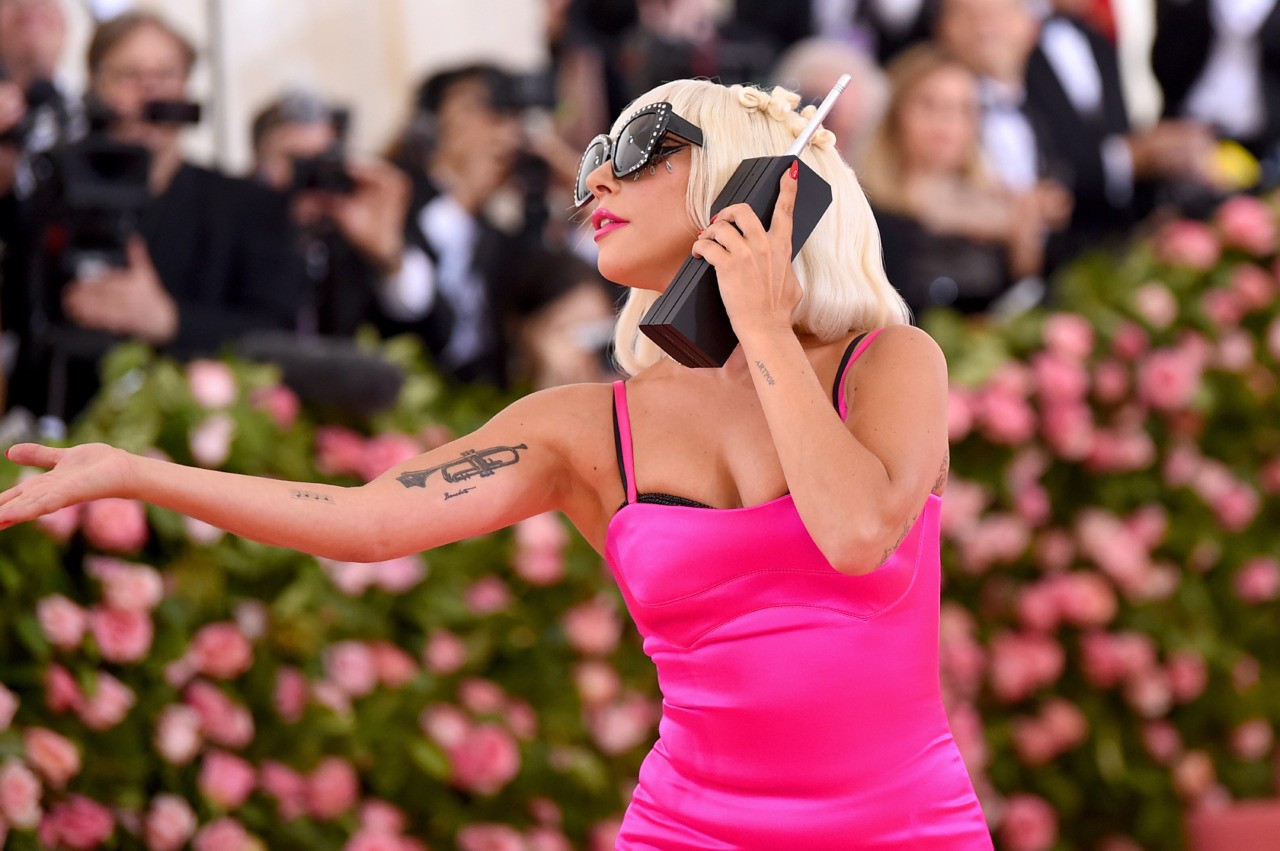 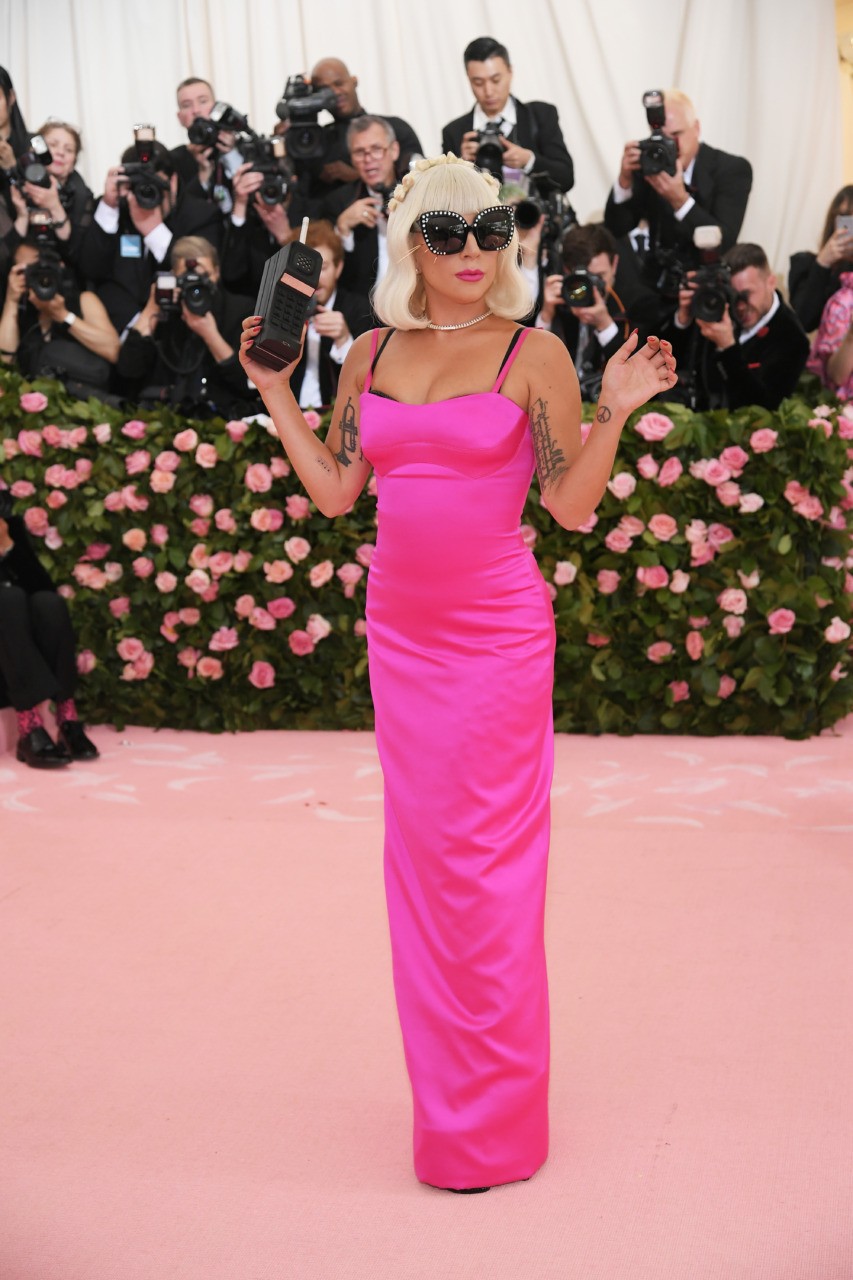 Gaga’s other three looks, all by Brandon Maxwell, were so ridiculous, so cheap, so not fashion, it’s almost disrespectful how she carried herself as the special guest for the evening of Vogue Editor-in-Chief Anna Wintour.

She arrived in fuschia version of Princess Diana’s billowing wedding dress from 1981. She then stripped down to a sleeveless black gown with a similar 1980s-esque poof skirt on one hip and carried an umbrella, as if she was role-playing Mary Poppins. Fast forward to the last look, and Gaga is in a cheap, unflattering black bra and panties with fishnet stockings and matching platform boots.

This Lady surely isn’t a lady after all. 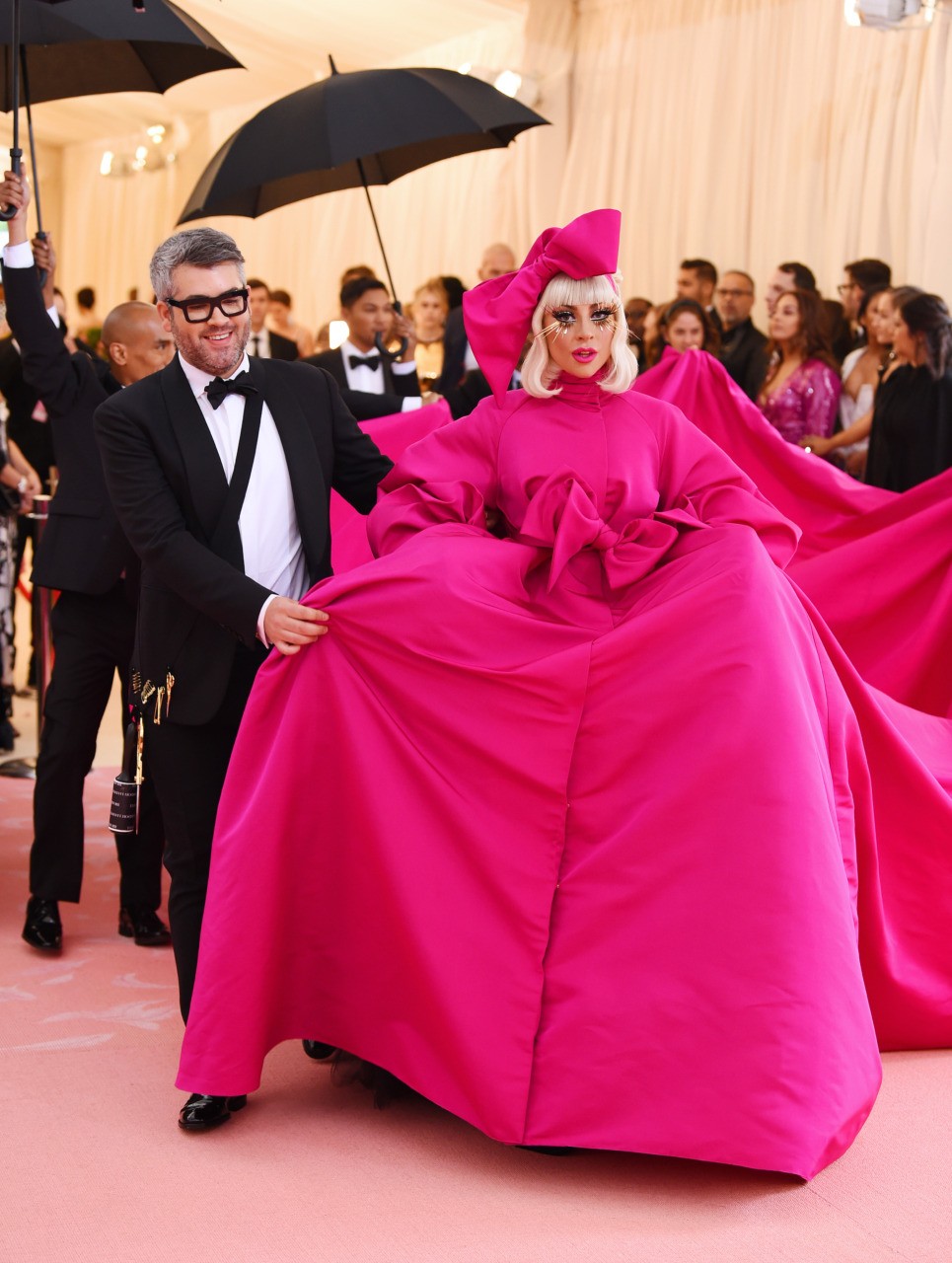 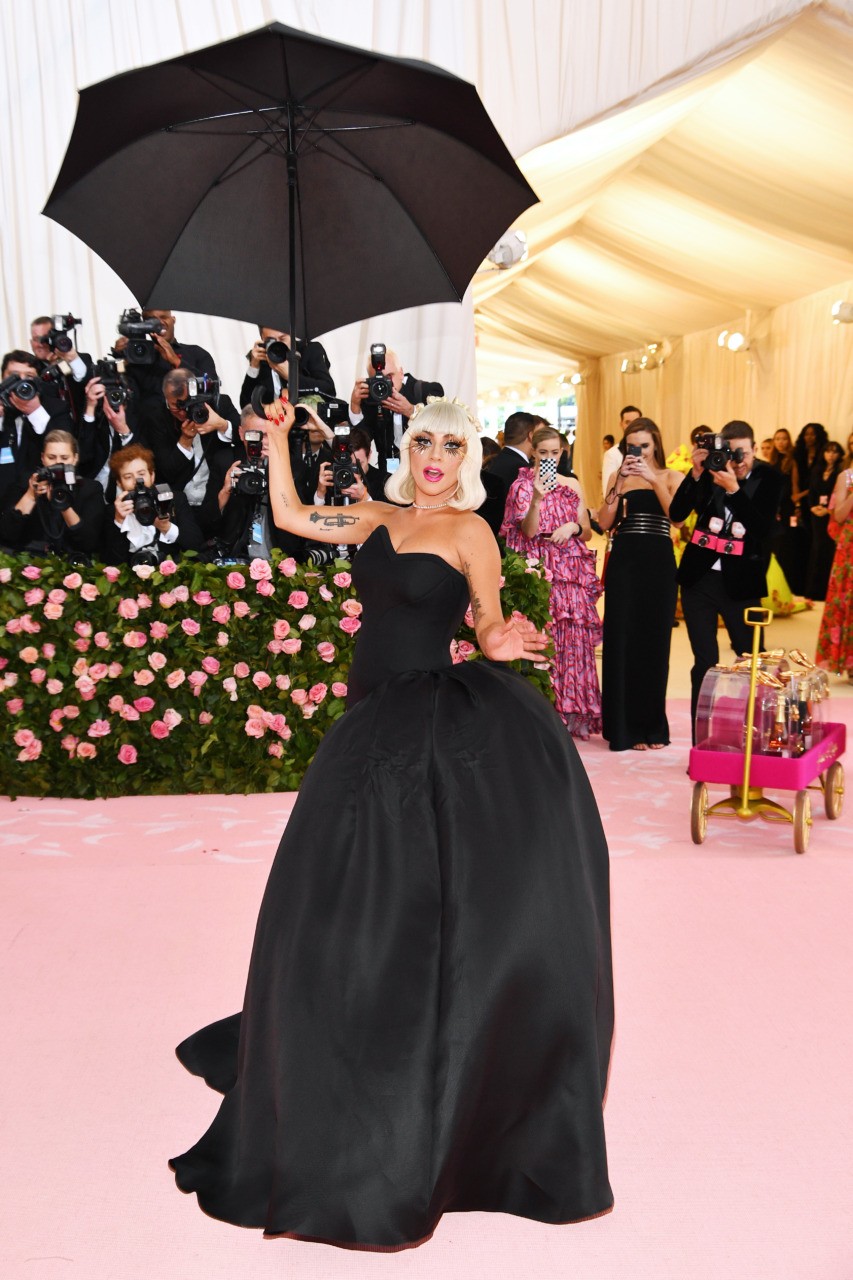 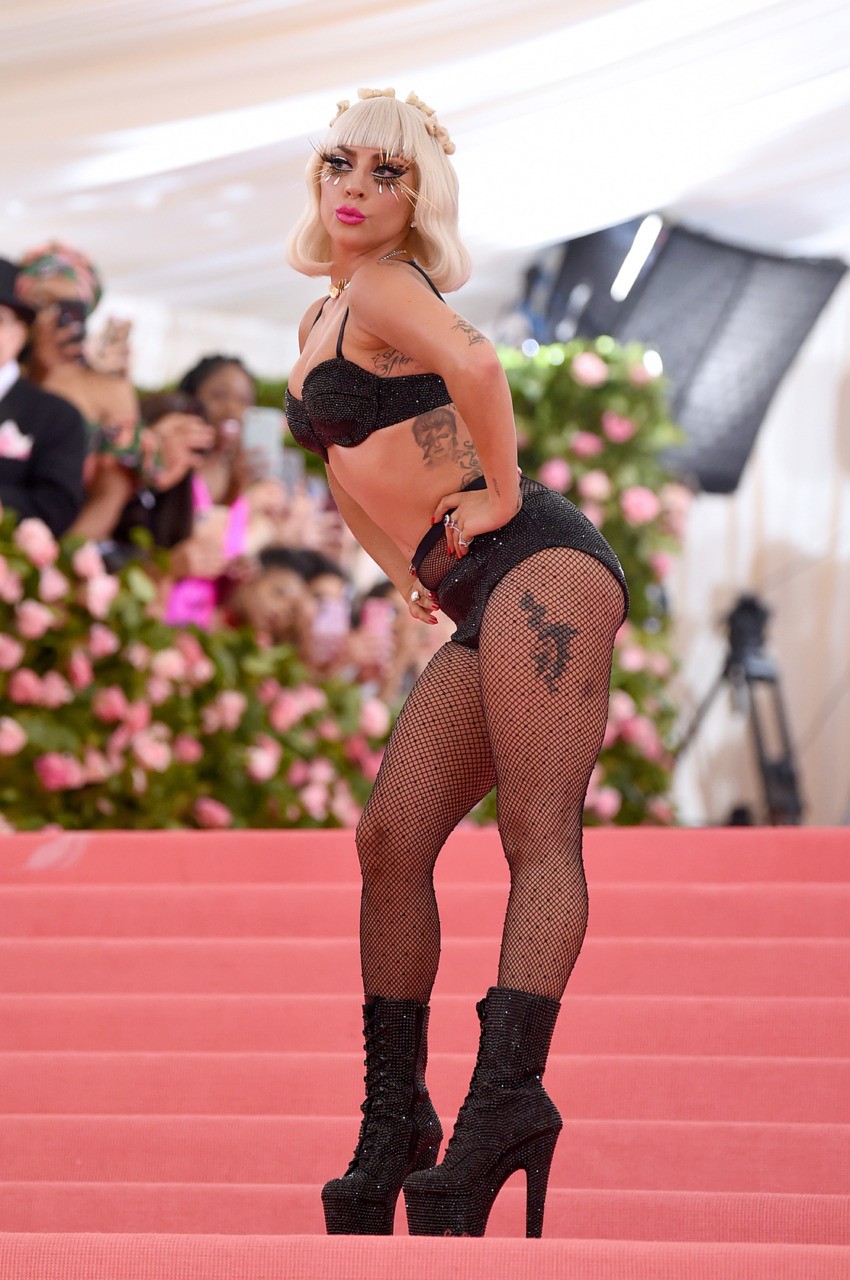 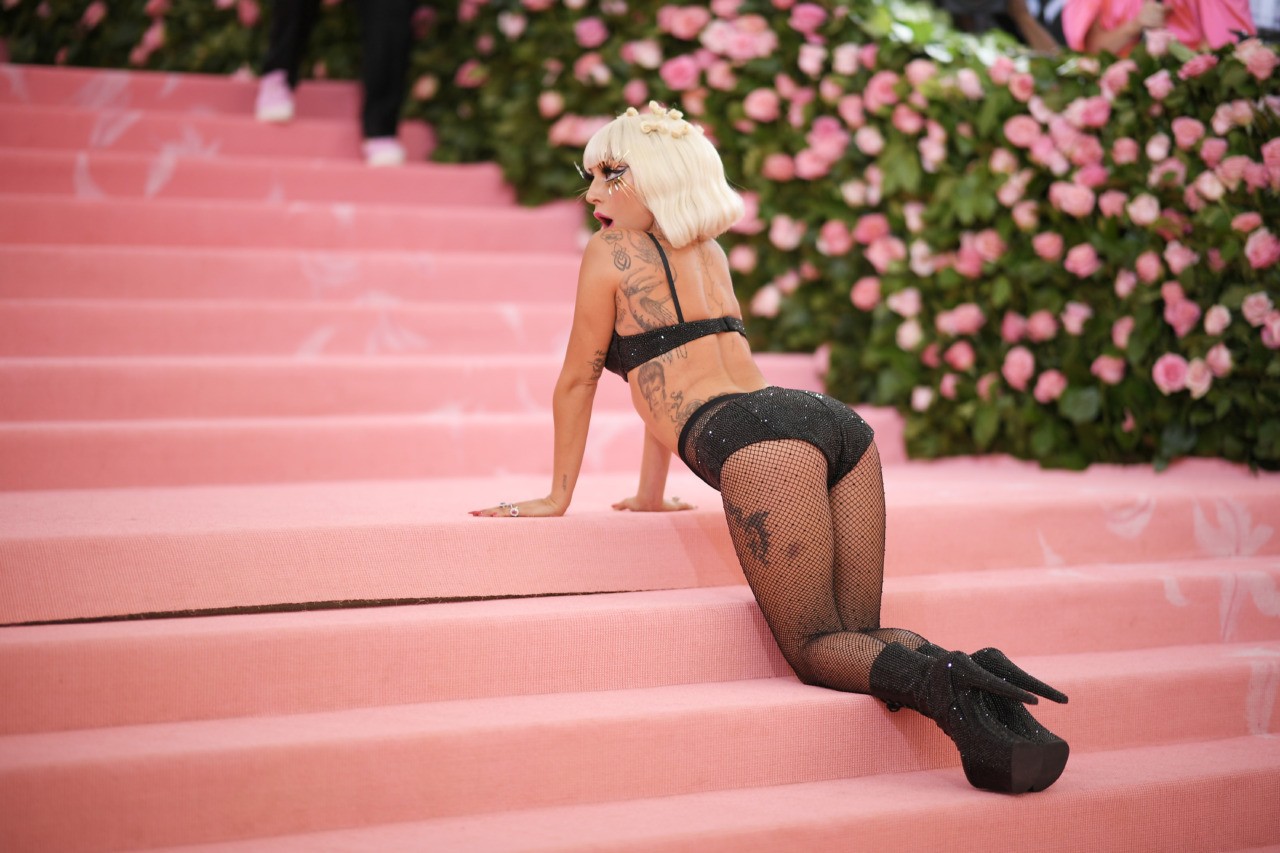 Actress Lena Dunham arrived in this Christopher Kane ensemble and left me wondering who let her walk out of the house like this? With a giant bow draped down her back, wrinkles at her crotch, latex gloves that appear to be cutting off her arm circulation, and a pair of heels that should never see the light of day, Lena once again gets it all wrong. 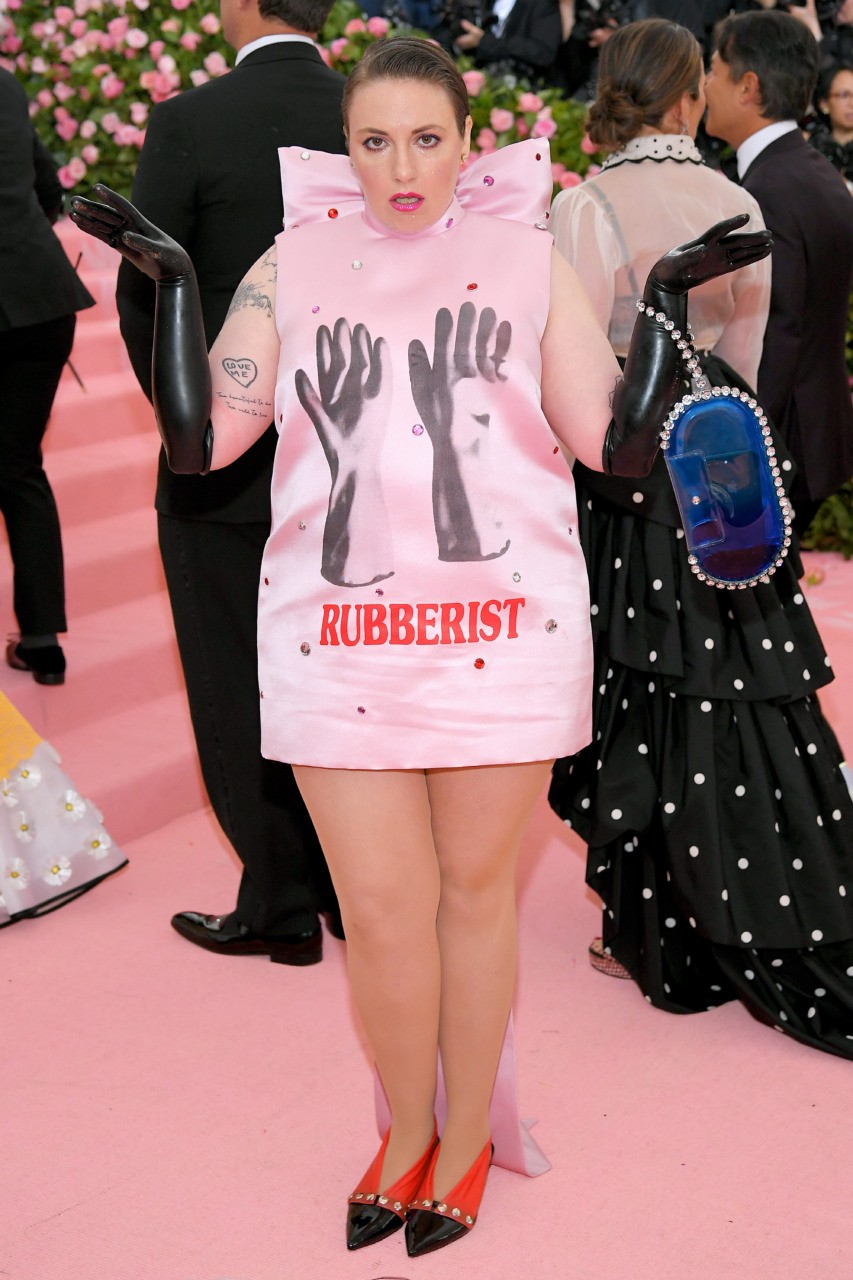 For avid Fashion Notes readers, you will know that my fixation for “The Row” fashion designers Mary-Kate and Ashley Olsen is borderline unhealthy. So, of course, these two end up on my best dressed list — but for good reason, I promise!

Chanel’s Karl Lagerfeld has been gone now for about nearly three months. In my tribute to him, I called him fashion’s most prolific innovator, and it’s true, he was. And yet, the snobs of the fashion establishment have treated Lagerfeld’s death as though he was just another designer. There have been few Vogue cover tributes to him and no one paid tribute to him at the Met Gala this year, except for the Olsens.

In matching vintage leather Chanel looks, the Olsen twins paid homage to Lagerfeld in their own twist on camp fashion. After all, the campiest of camp is doing the fashion don’t and dressing in the same outfit as someone else on the pink carpet. 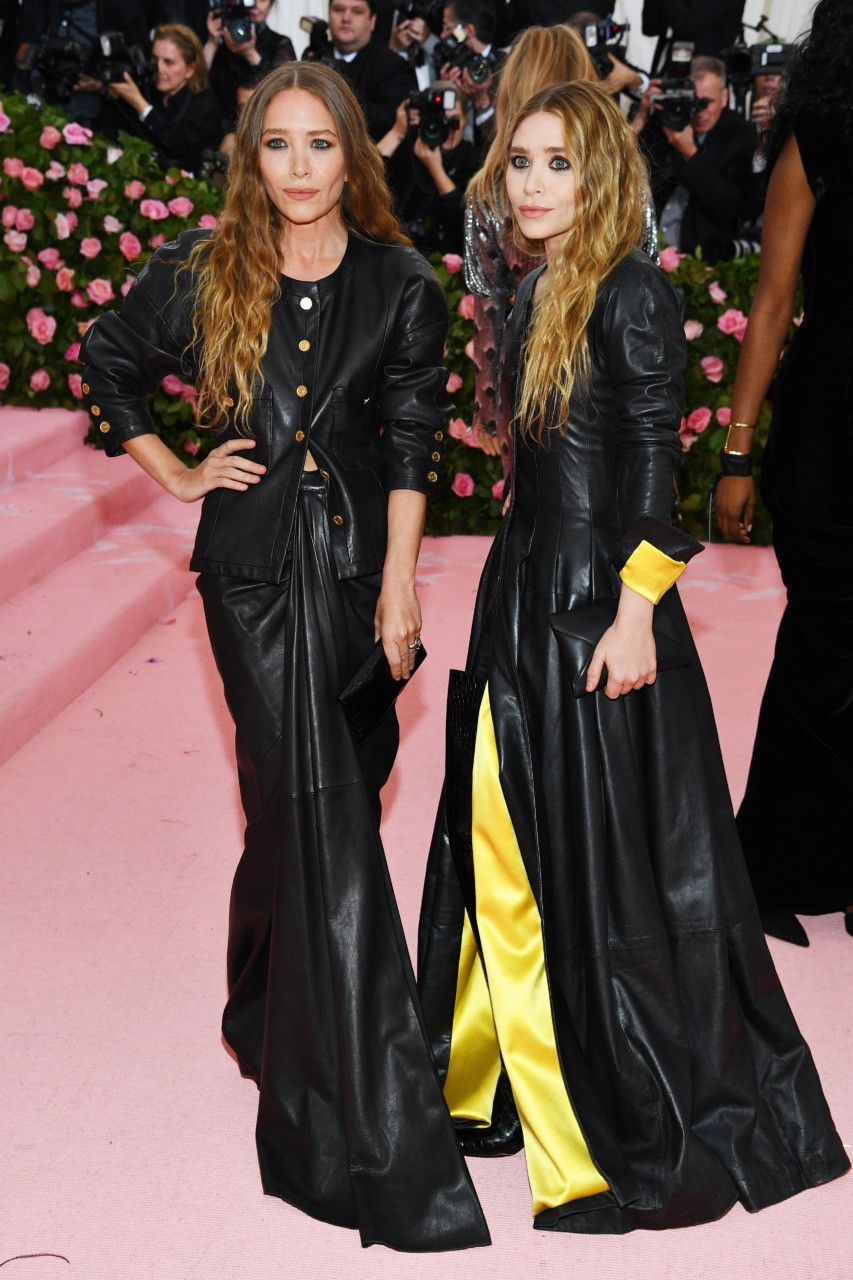 Pop singer Katy Perry got caught up in a gorgeous Moschino chandelier but failed to look elegant in any way. There is something always quite lame about what Katy does. She’s a sugary pop star who wears sugary clothes that really any other sugary pop star could wear better.

I imagine this chandelier look would be better worn by Rihanna. 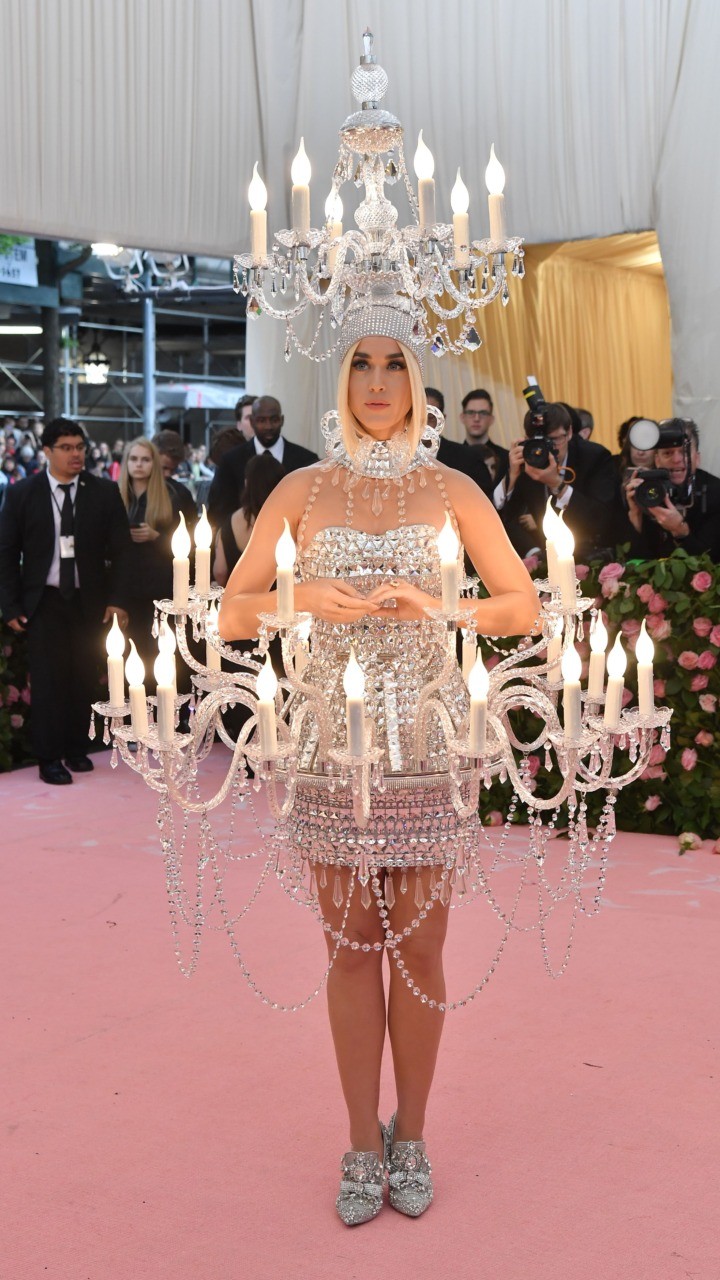 Even when it comes to camp fashion, less is more.

While others balanced feathered collars on their shoulders and chandeliers on their heads, supermodel Amber Valletta wore a nothing but a lime green ostrich coat and sexy black bodysuit by Saint Laurent’s Anthony Vaccarello. This look with Valletta’s severely-parted sidebang, black tights, and black pumps was très chic on a night when everyone was going over-the-top. 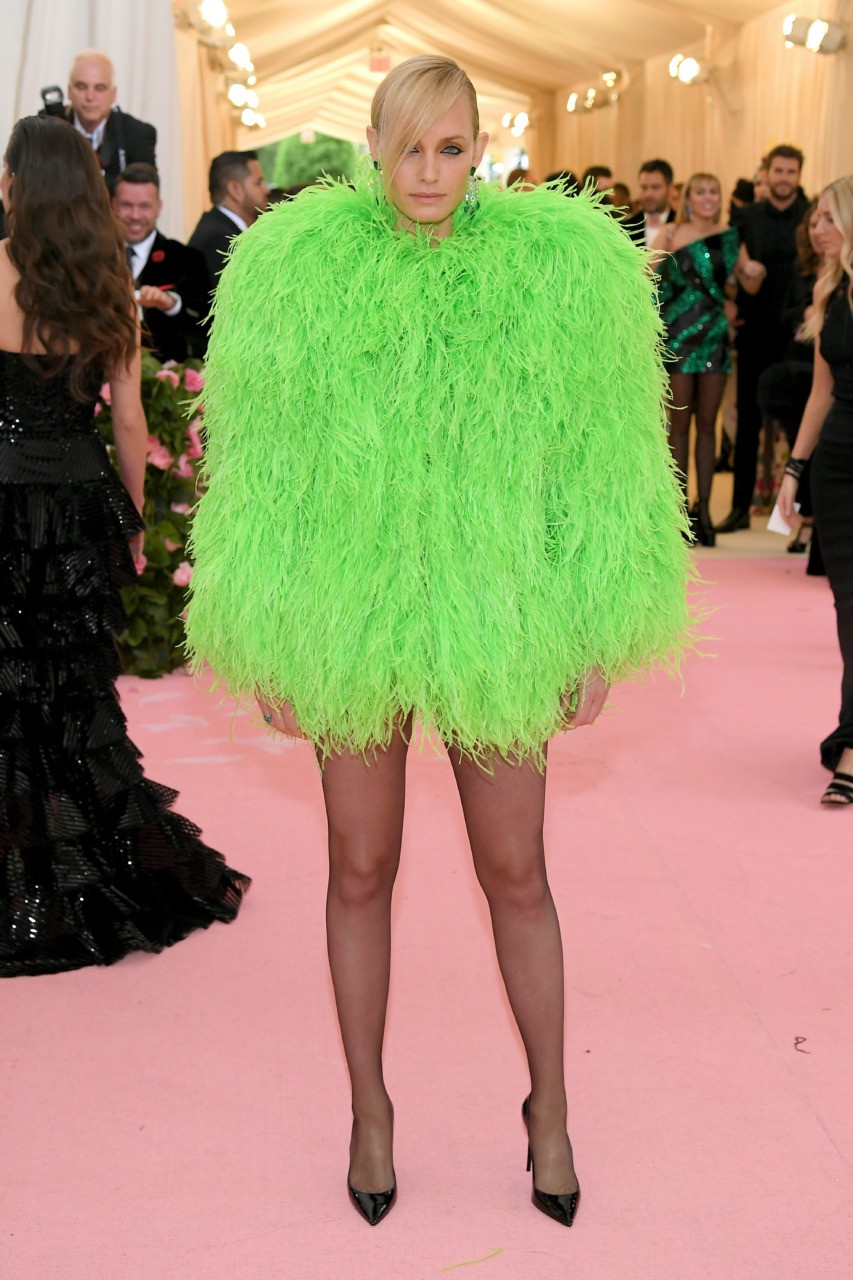 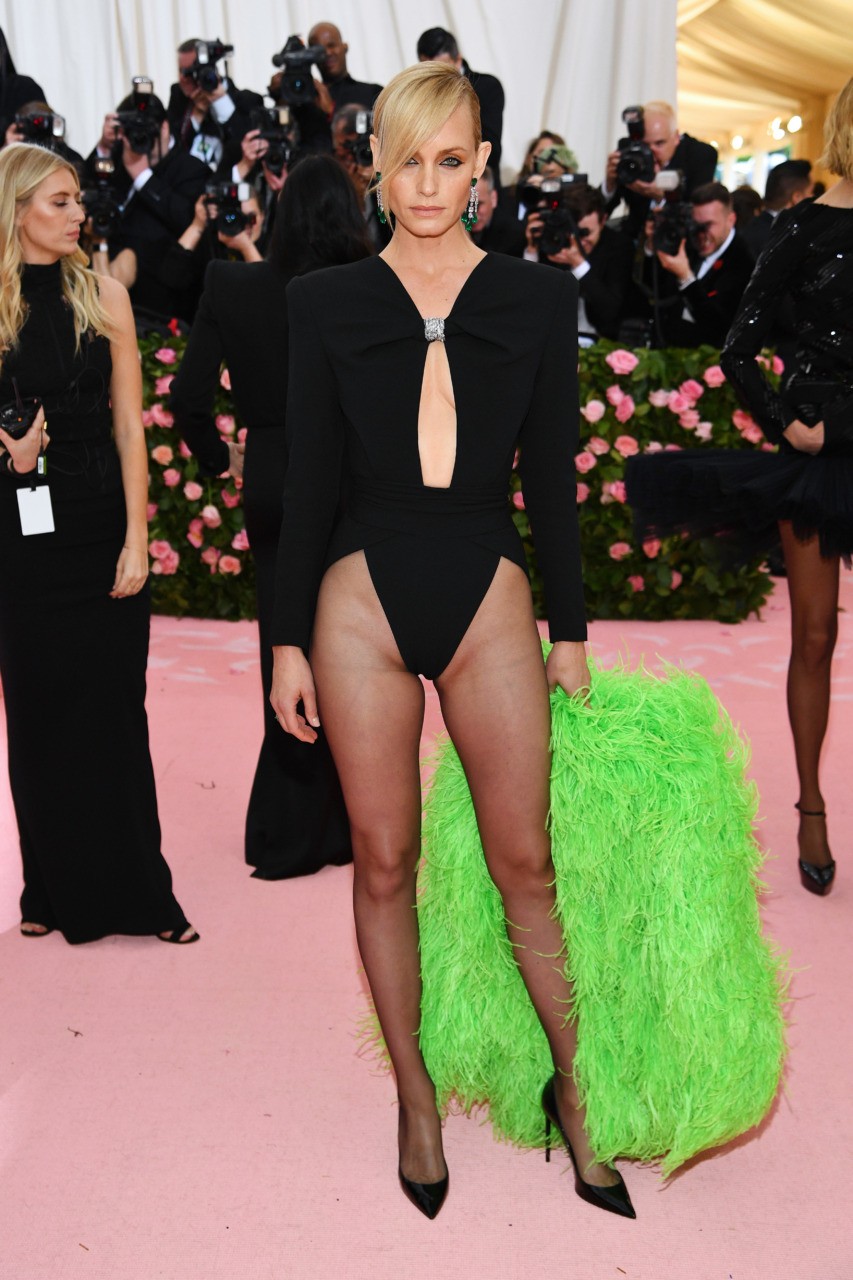 Actress Lucy Boynton was a dream on the pink carpet at the Met Gala, like a fairy floating through the hordes of celebrities desperately trying to set up poses and dramatic arrivals.

In this pale grey and purple Prada gown covered in hours of beadwork, feathers, and a matching headband, Lucy paired her light seafoam-toned hair to her look and opted for icey eyelashes. I would call this, effortless camp. 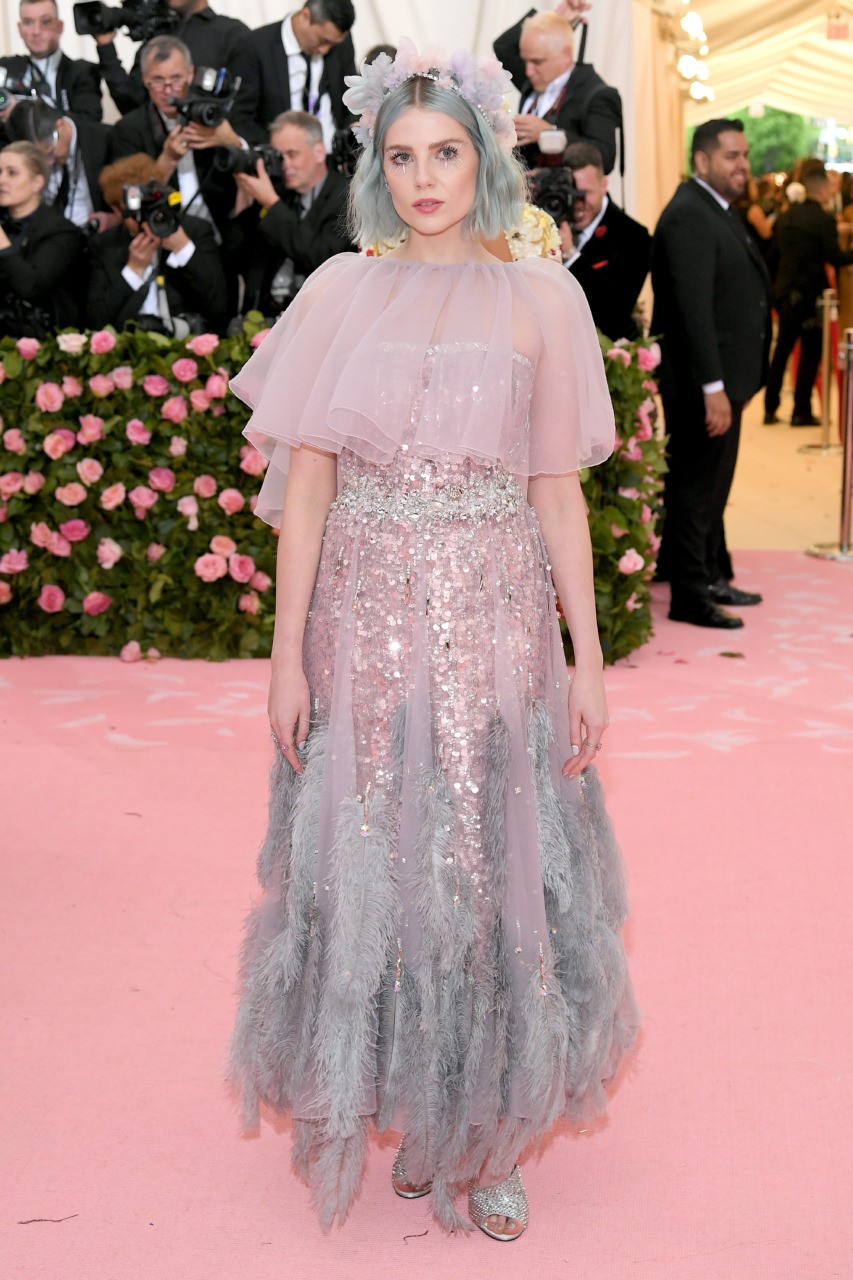 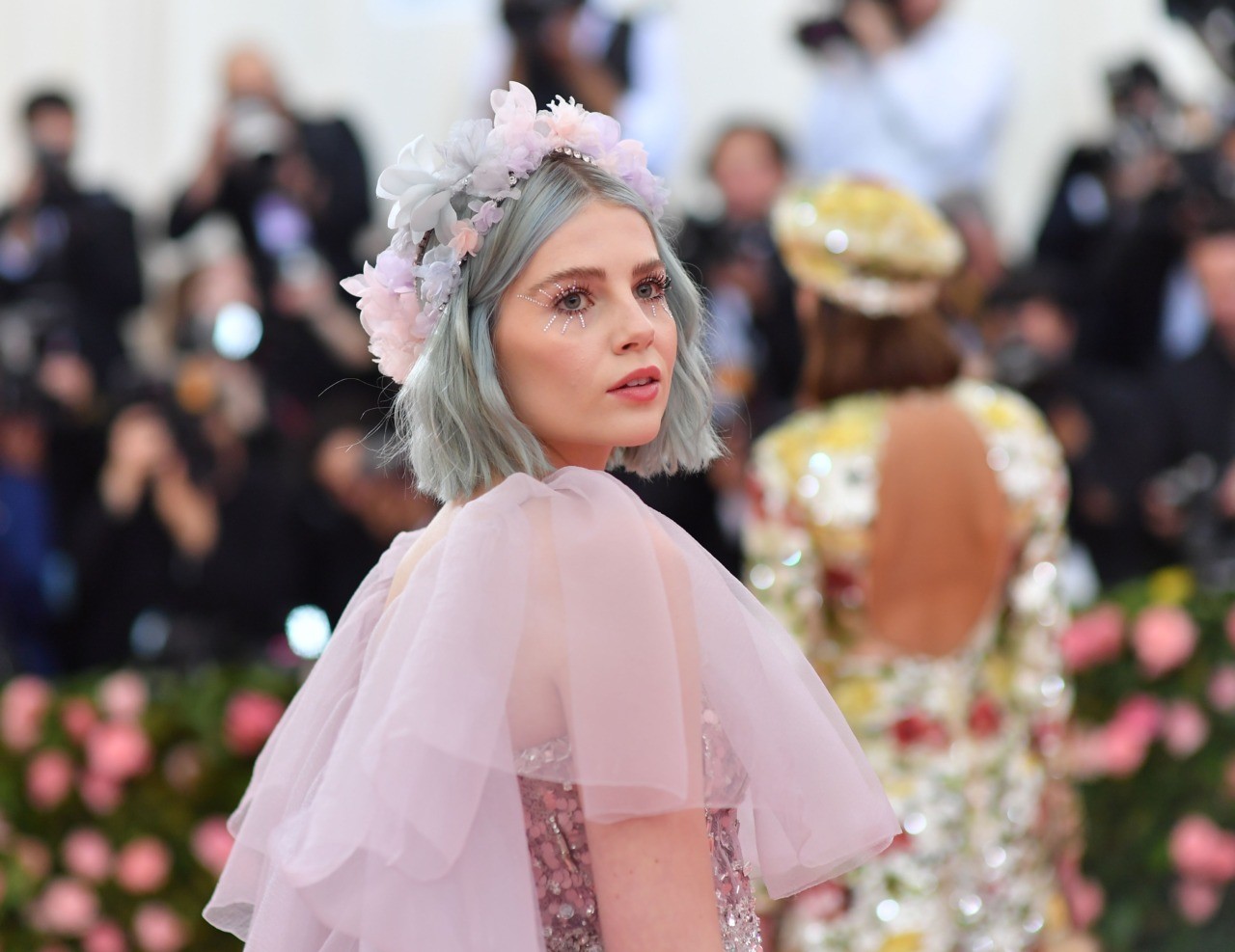 Shawn Mendes is the teen girl’s newest heartthrob and I imagine that he’ll be breaking even more hearts after his adoring fans see him in this classic, Elvis Presley-style Saint Laurent suit.

While other boys at the Met Gala tapped into a gender-bending persona, Mendes kept it cool in this black suit designed by Anthony Vaccarello, a Saint Laurent’s creative director. His slicked-back hair, black shirt, pointed black crocodile oxfords, and single silver medal on his chest was the subtle rock and roll vibe that this pink carpet was lacking. 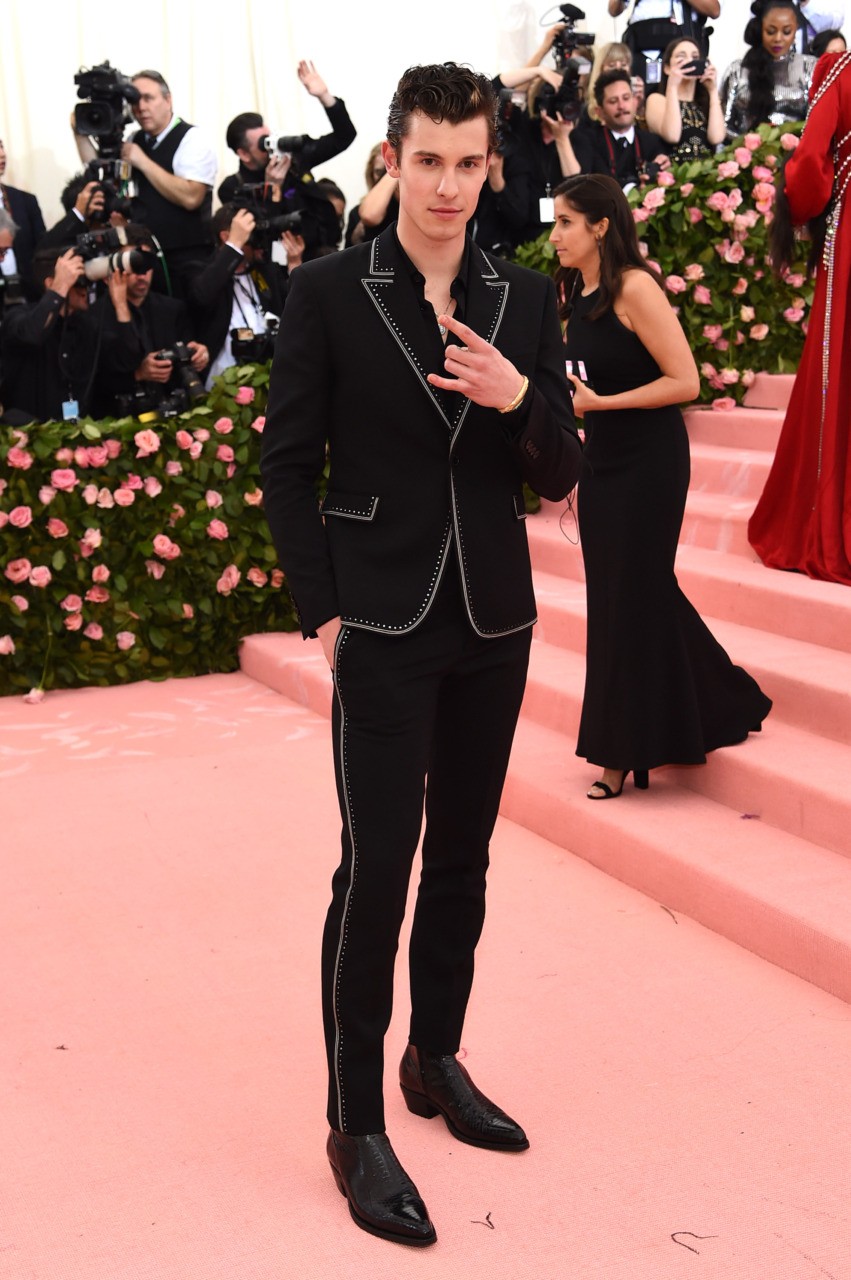 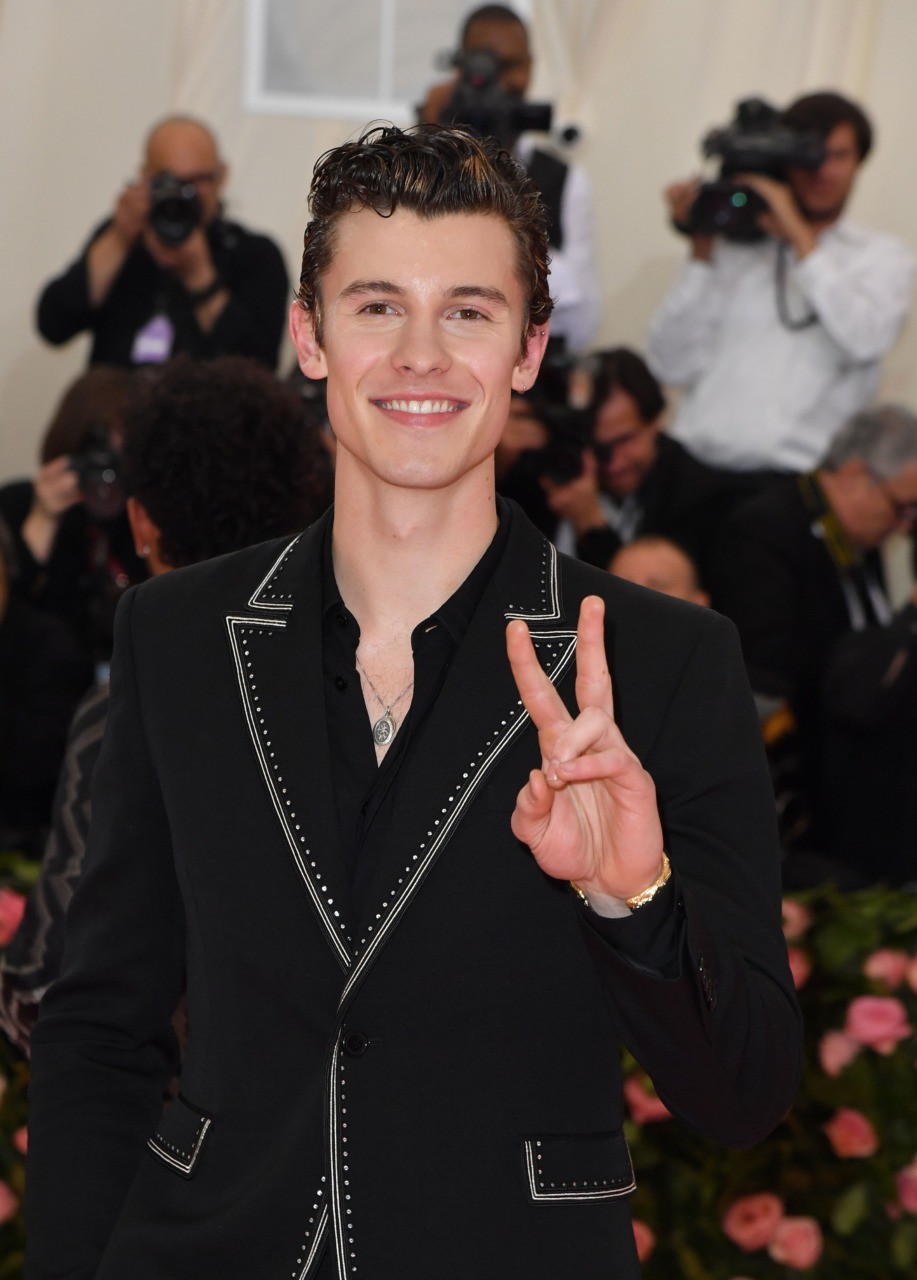 It’s nice that model Gigi Hadid arrived as Frozone from “The Incredibles” this year, but she must have forgotten that the superhero them was a few years ago. And to think Michael Kors designed this gold and white speckled bodysuit, cape, and helmet combo.

Stick to the cashmere sweaters and “MK” handbags! 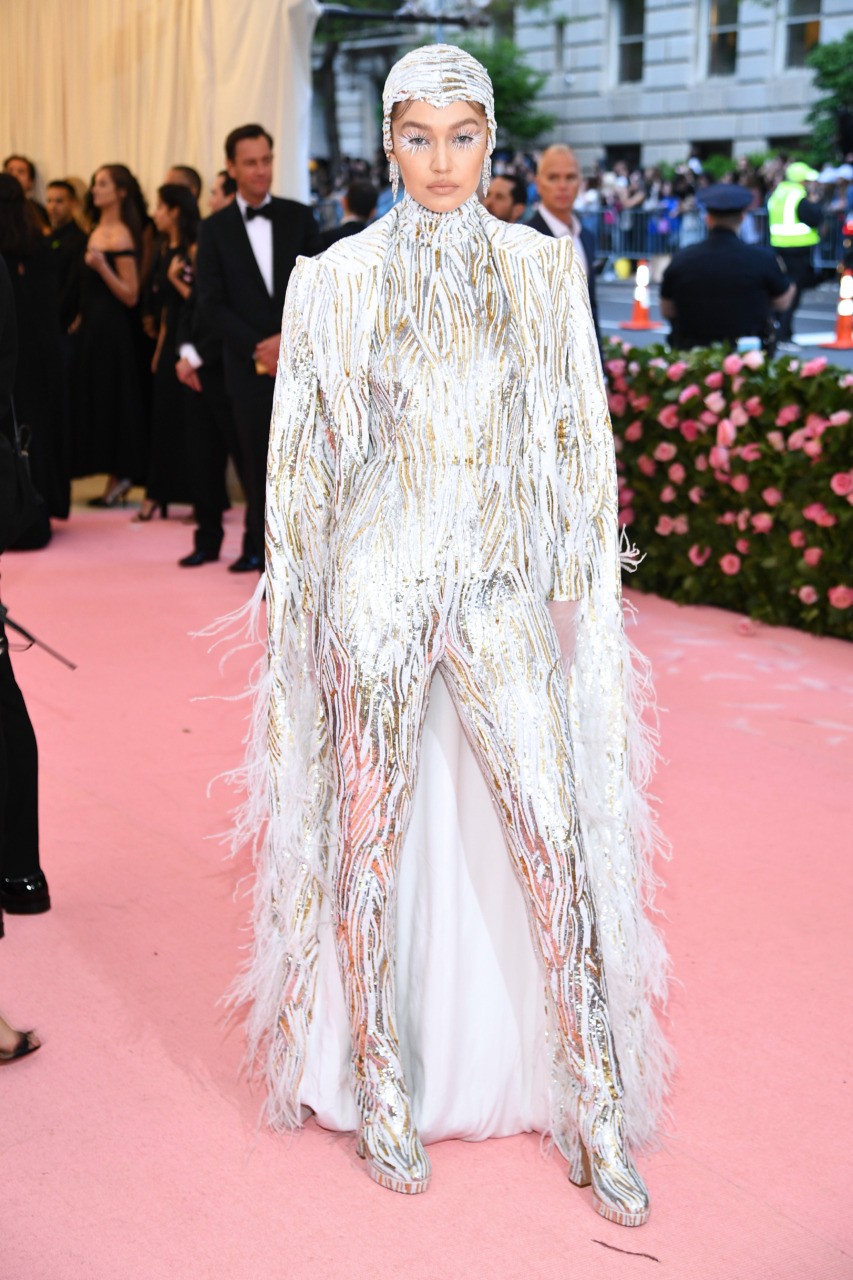 I won’t lie, when I first saw country singer Kacey Musgraves in this Barbie-inspired Moschino look by Jeremy Scott, I thought I was looking at Paris Hilton which truly is not a bad thing. The two could be identical twins!

What I find so exciting about this look is that it is an homage to the great Dolly Parton’s “Backwoods Barbie” album with its hot pink leather motorcycle jacket gown, matching faux fur stole, plastic pink sunglasses, silver pumps, and what else but a hot pink hairdryer handbag!

The country girl with a southern twang who grows up to be a blonde ambition. Country camp never looked so city. 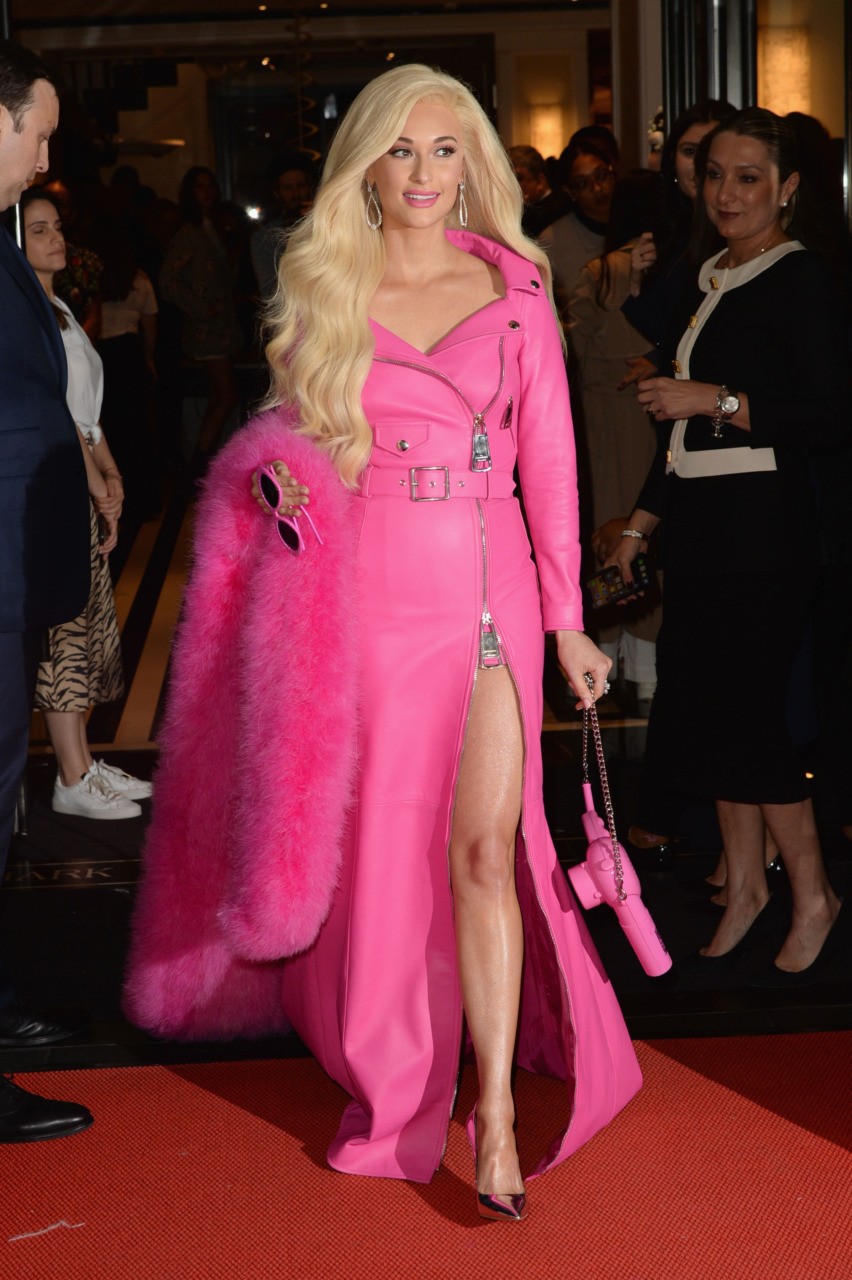 Singer Jared Leto is very close friends with Gucci’s creative director Alessandro Michele, so naturally, when the two worked together on Leto’s look for the Met Gala, he was given the royal treatment.

This royal treatment came in the form of a draped red cape cloke and beaded harness with a heart at the center along with a doppelganger of Leto’s head that that rockstar carried with him throughout the evening, straight from the Gucci runway. It’s all so Game of Thrones! 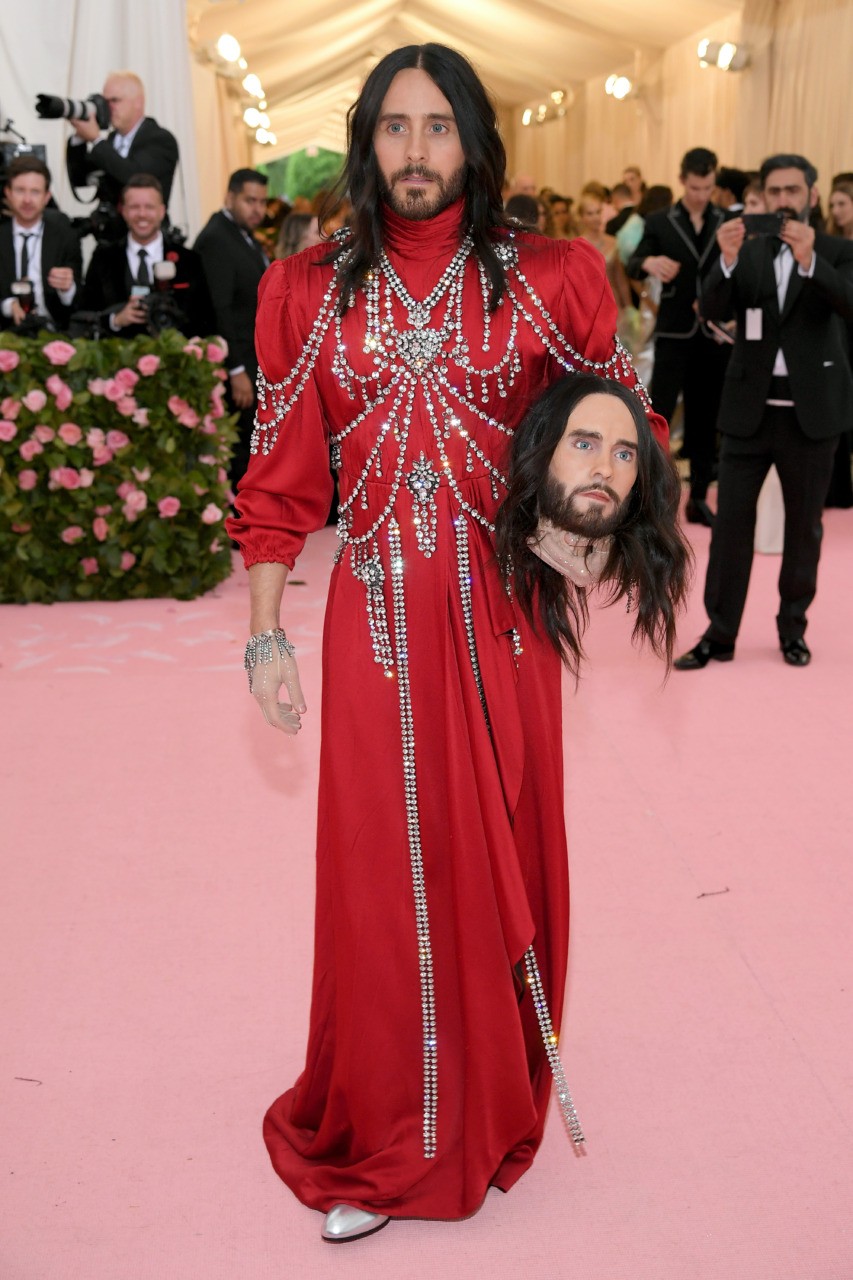 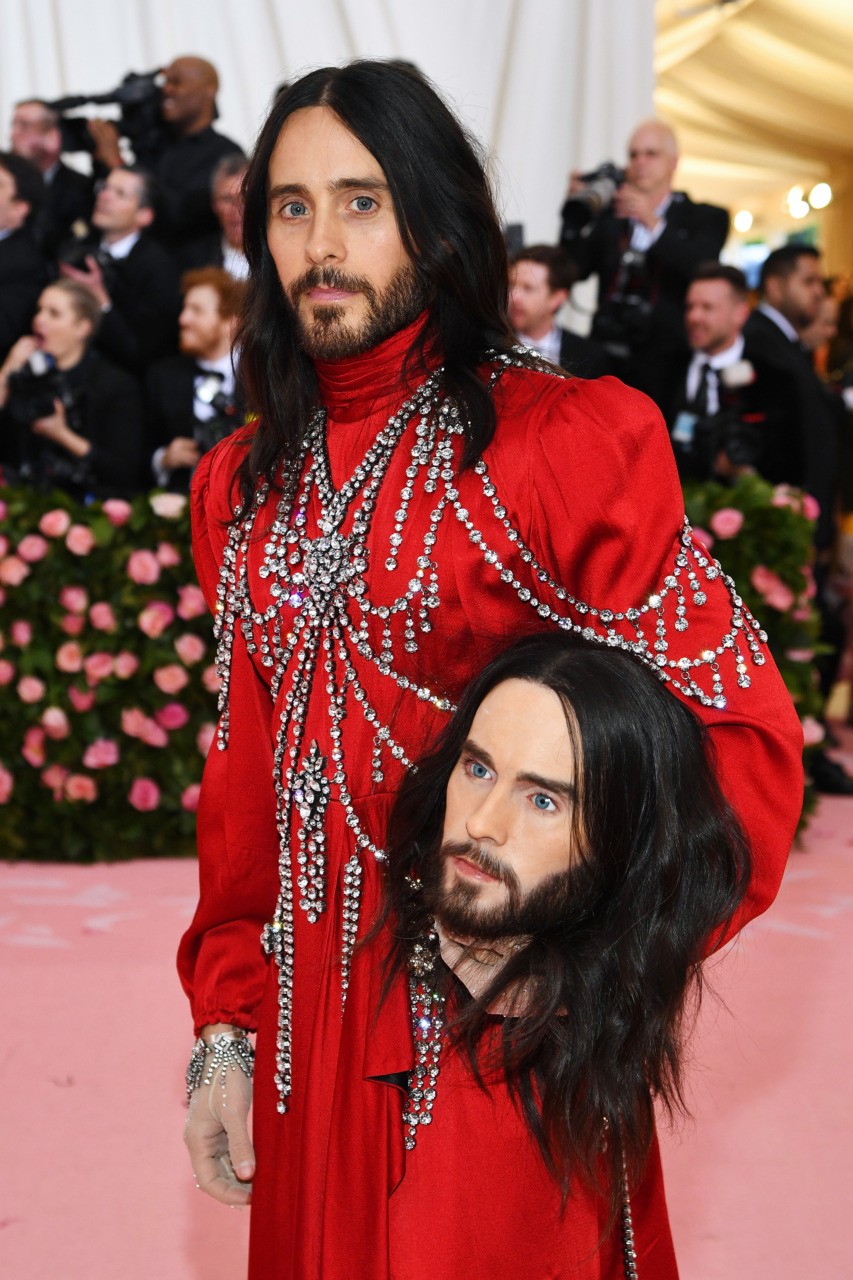 Supermodel Naomi Campbell’s Valentino gown, lace tights, and heels were truly an exceptional ensemble mostly because it took all of the most traditionally tacky elements of fashion and made them work.

A plunging neckline, check. Purple feathers, check. White lace stockings, check check. And strappy matching stilettos, check. All of it came together in such an ethereal yet humorous way. I guess when you’re this super you really can’t do any wrong. 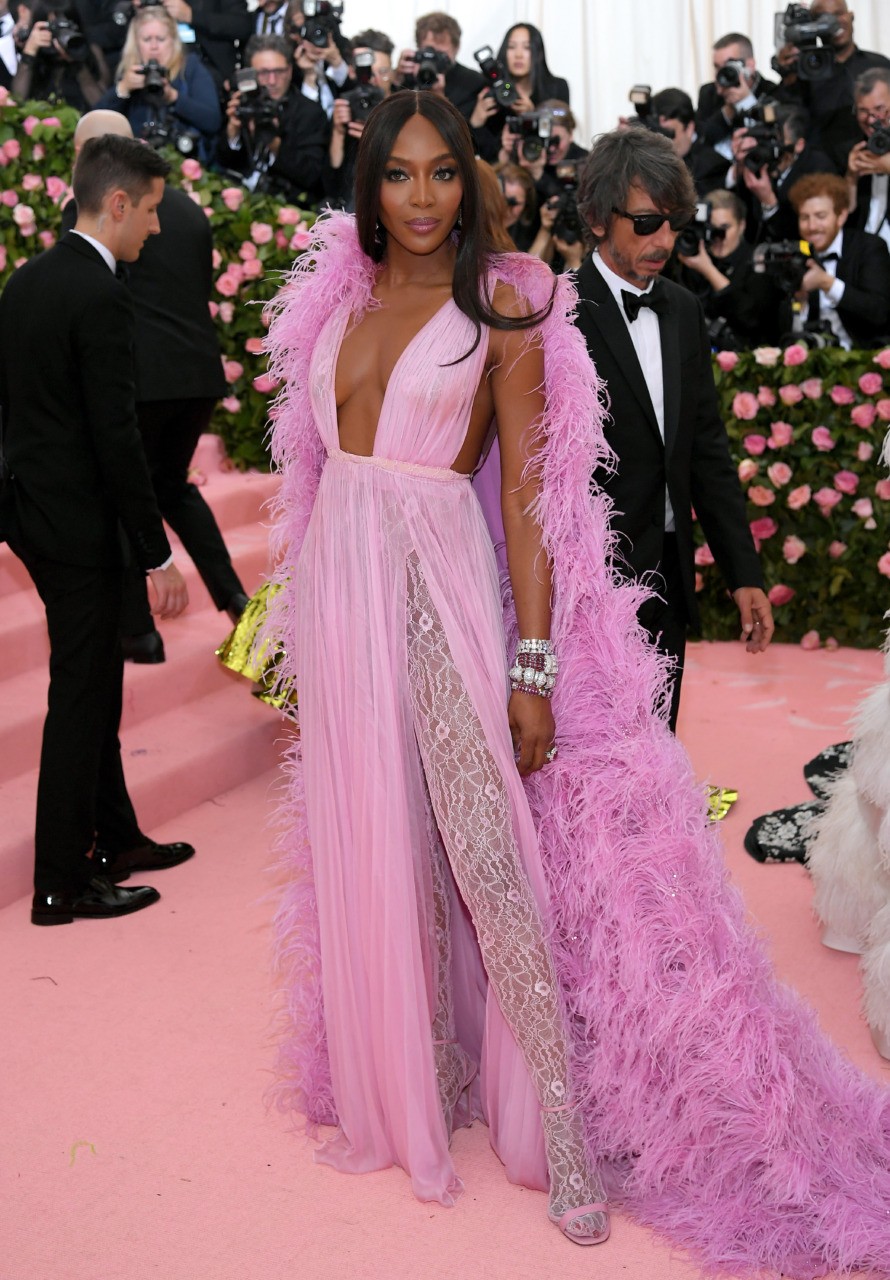 Kris Jenner might be the queen of her Kardashian empire, but she definitely was not the queen of the Met Gala. Unlike Kylie and Kendall, two of her famous daughters who looked fierce for the evening, Kris wore a blonde wig and a patriotic Tommy Hilfiger creation that seemed to have a showgirl undertone.

I feel like her kids are trying to sabotage her. 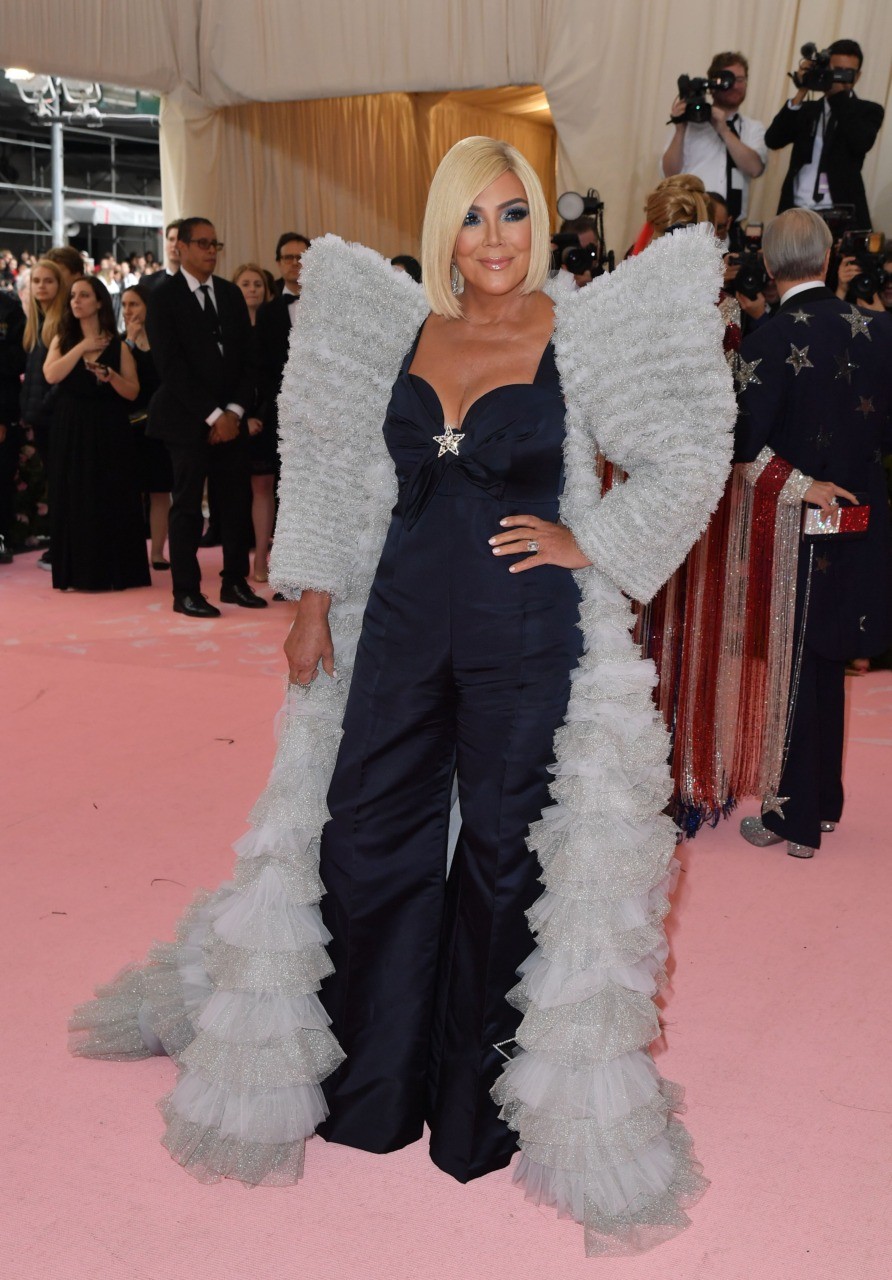 Singer Miley Cyrus was so cool on the pink carpet for the Met Gala, which is at times an aesthetic that folks are often trying to imitate. However, when everyone else is in camped up looks, there is something very pleasing about seeing a young girl in a nightclub-ready party dress.

With her natural sandy blonde hair, Miley’s striped Saint Laurent mini skirt dress featured a beautifully sculptured front bodice and back, like origami. The polka dot black tights, strappy satin platform heels, and Edie Sedgwick style chandelier earrings made her the coolest chick on the pink carpet — sort of like she didn’t even care to be there. 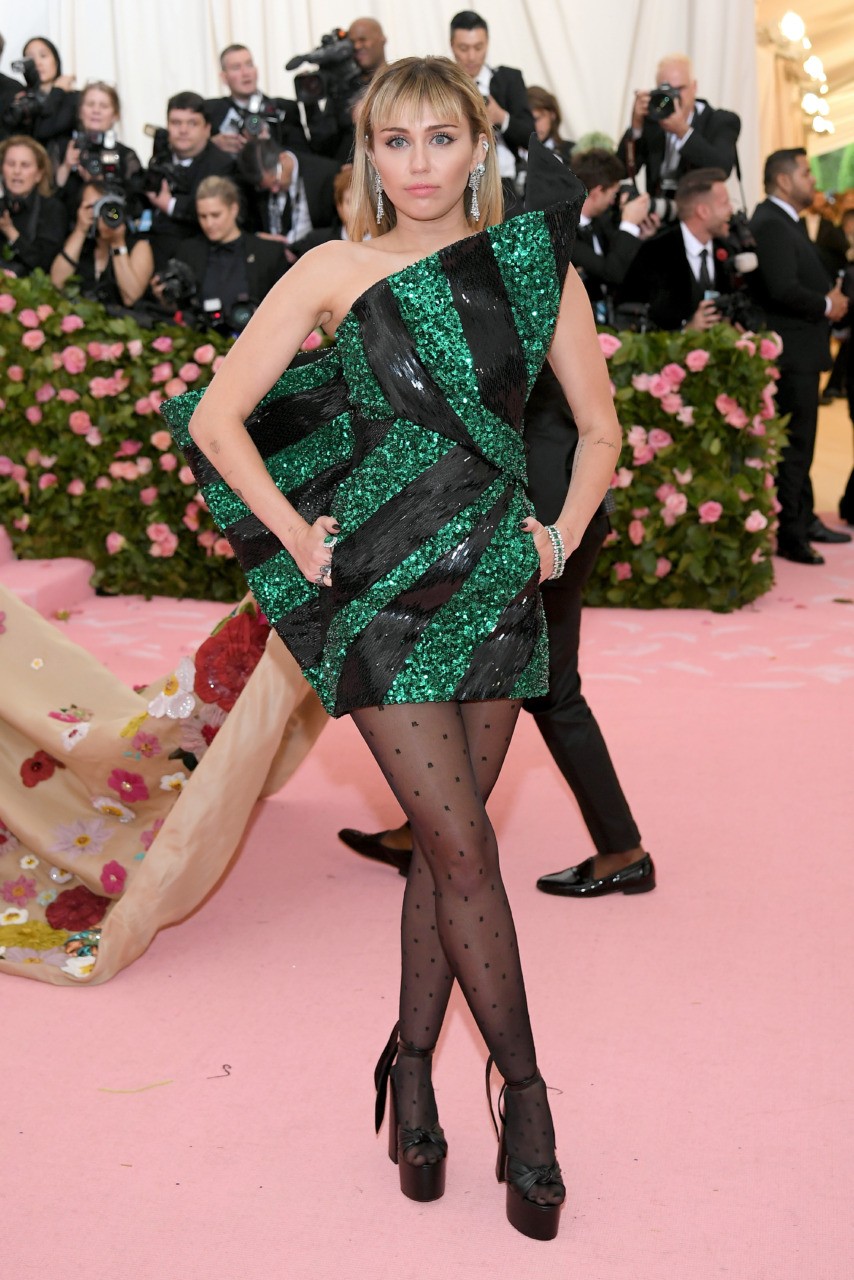 Celine Dion came to the Met Gala with a goal: Remind everyone who the original Divas are.

In this stunning gold and silver beaded bodysuit and intricate feathered headdress by Oscar de la Renta, she not only made her point but she outshined some of Hollywood’s youngest It Girls. Just check out those legs and that bronzed tan! 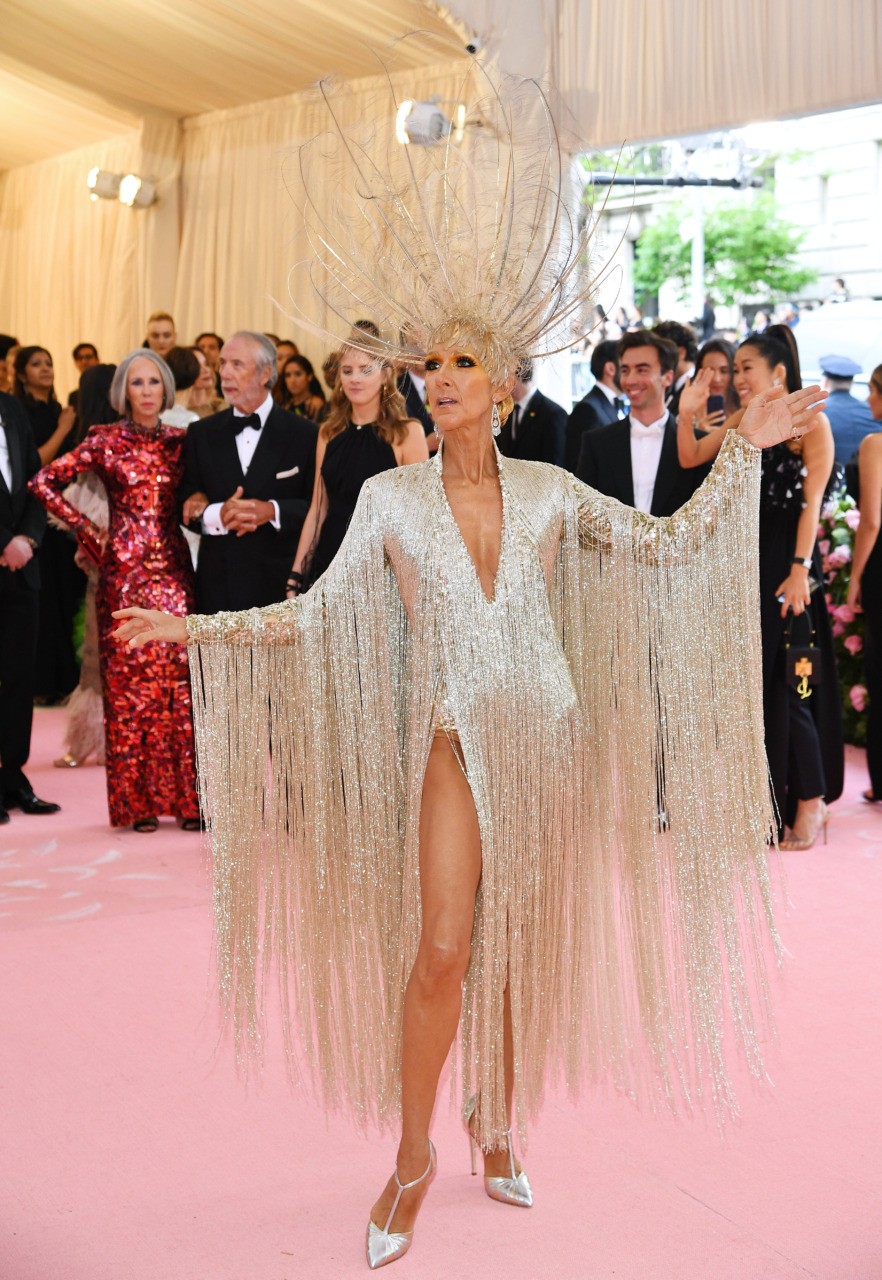 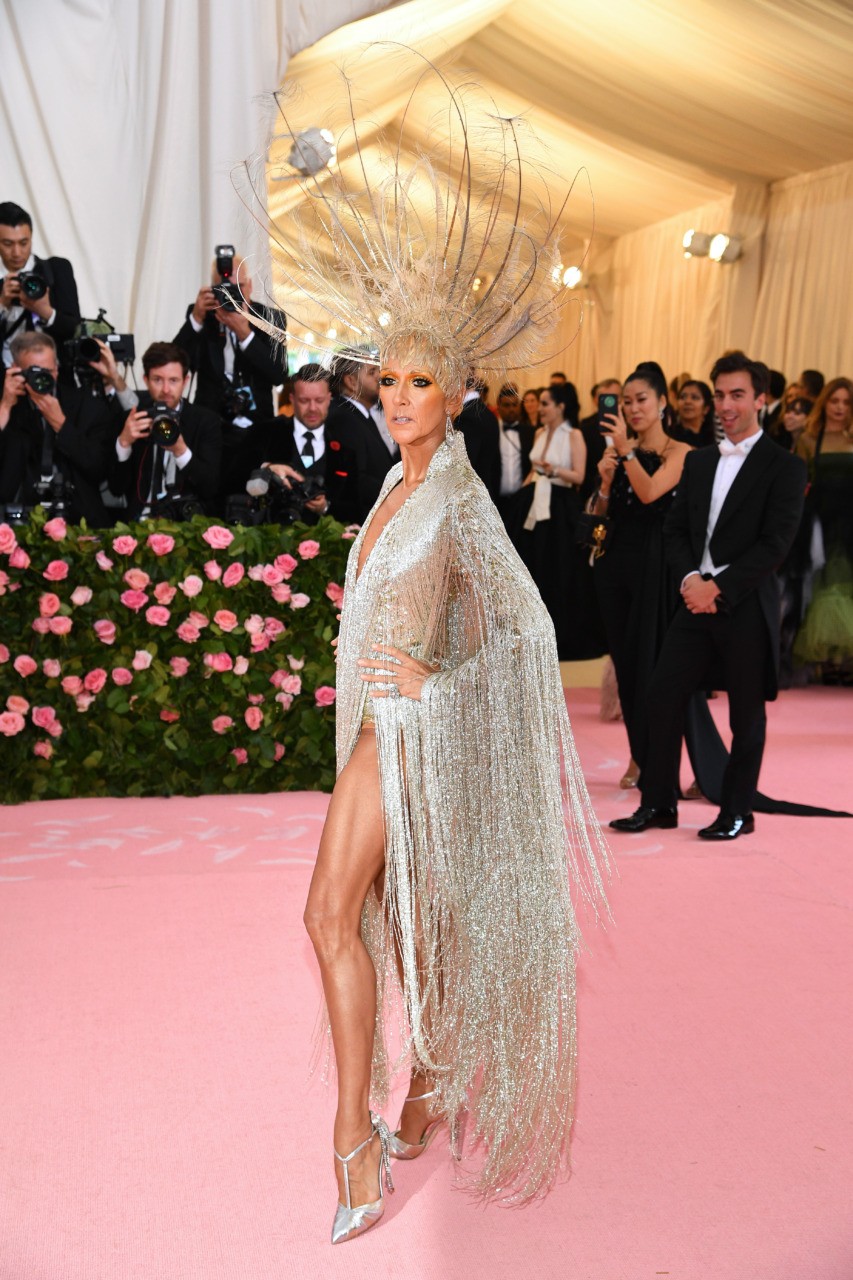 I was shocked (not really) to find out that actress Tiffany Haddish’s suit was designed by Michael Kors, mostly because I just assumed she had gotten it from the “Men’s Funky Pimp Costume” section at Party City. 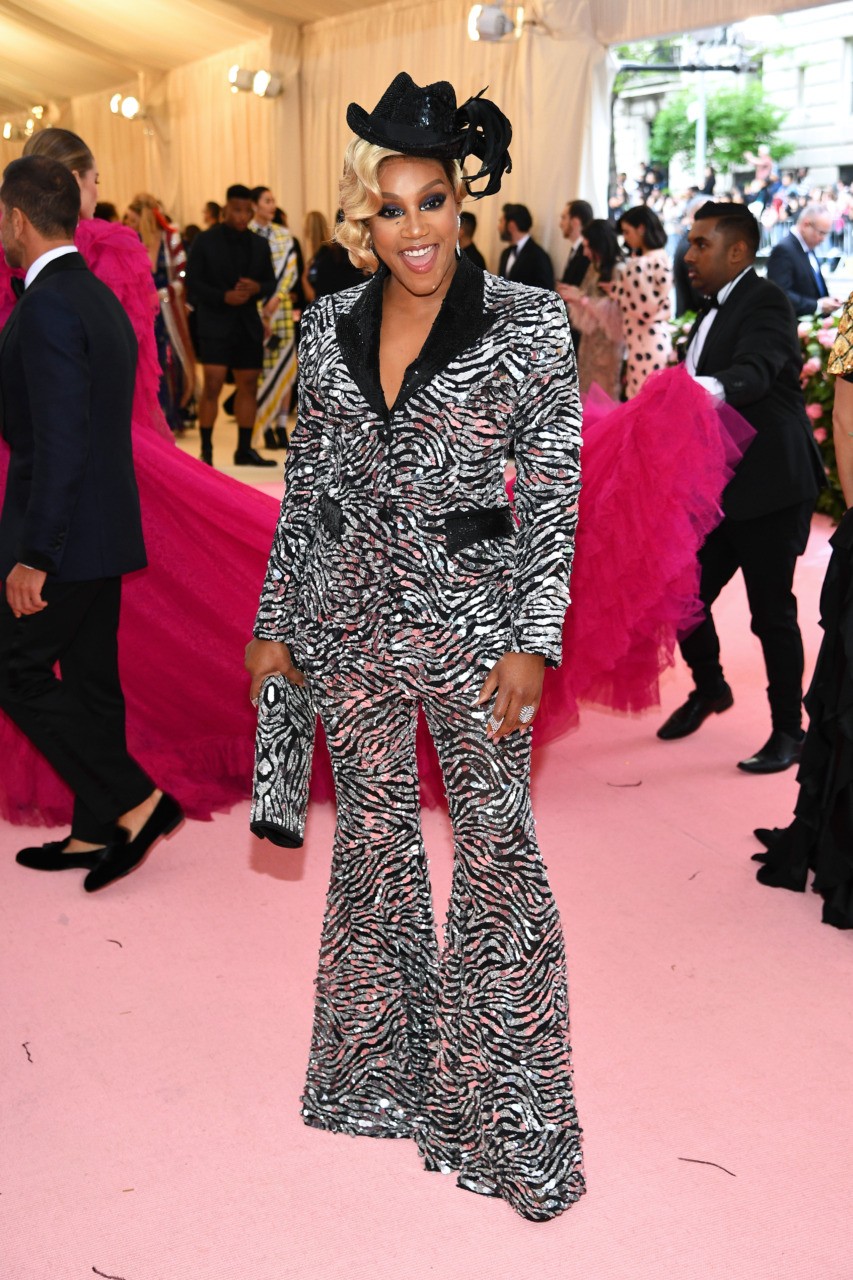 If there is an aesthetic that embodies camp the most it is gender-bending and struggle between the masculine and feminine. So, of course, singer Harry Styles had to channel Madonna from her “Confessions” tour in this gorgeous Gucci black frilled lace top, black trousers, and patent leather boots.

The equal balance between the feminine — the black lace, pearl earring, and slightly taller than usual boot — and the masculine — the traditional men’s trousers, unshaven face, and boyish tattoos — is what makes Harry’s look one of the best of the night. This is certainly one of those ensembles that is much harder to put together than it appears. There’s an art to it that others seemed to skip over in favor of dramaticism. 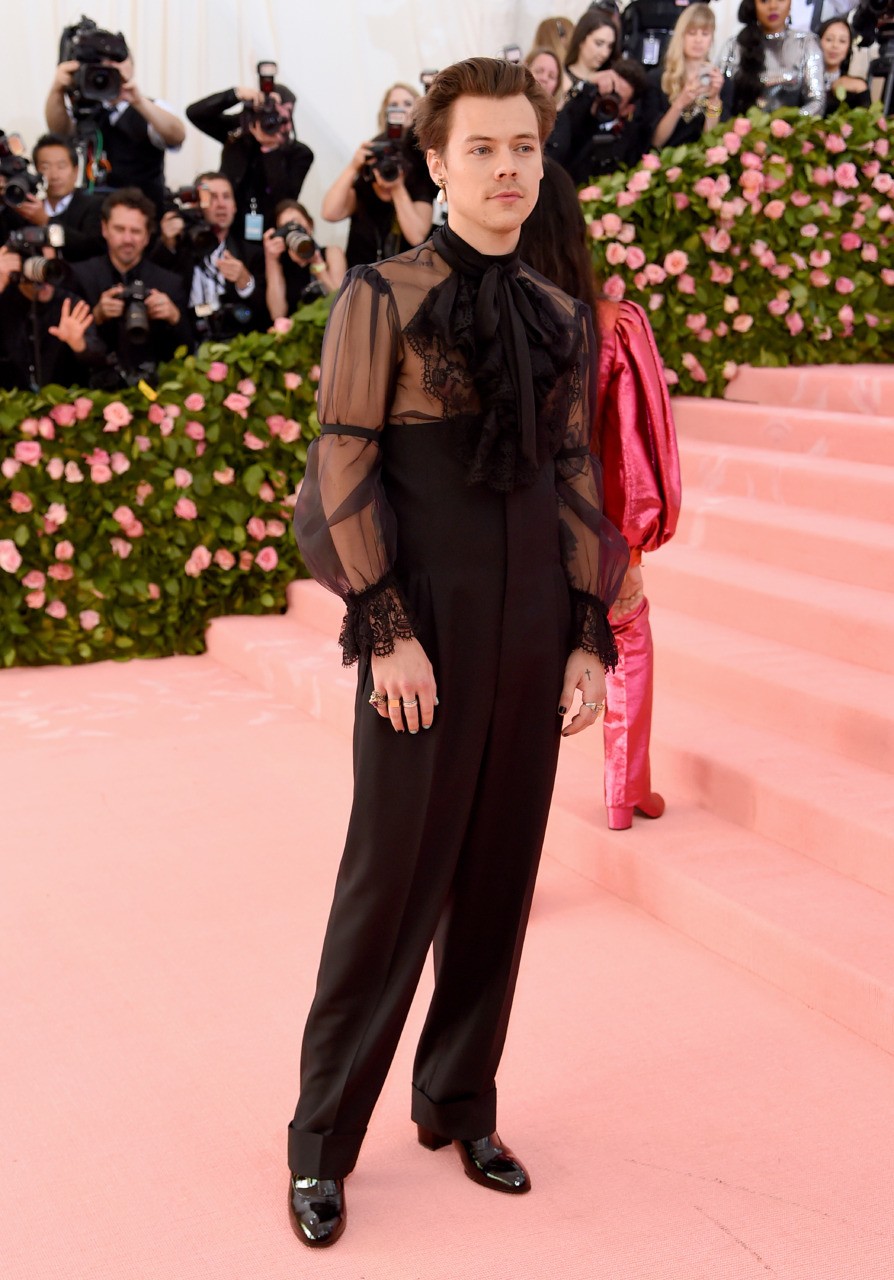 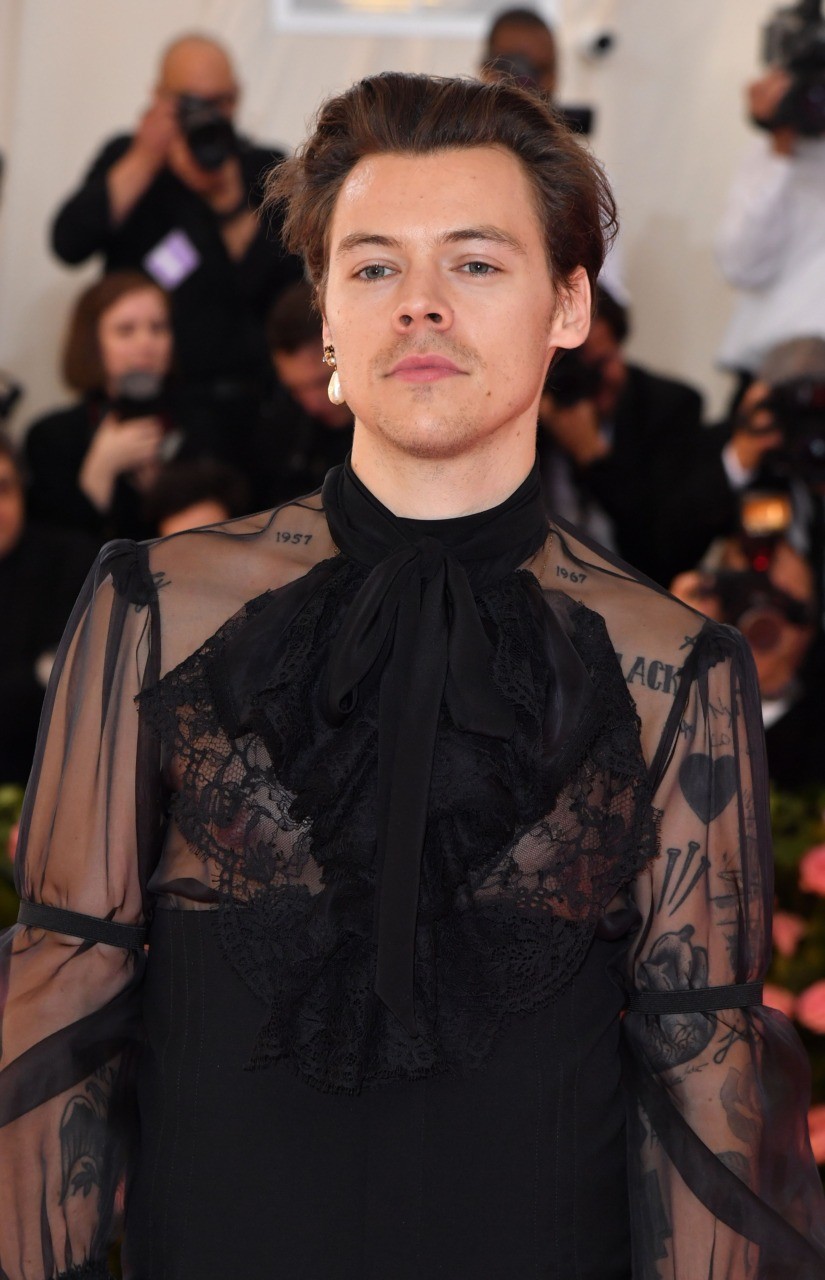