Electronic music producer Moby has canceled a book tour for his second memoir and promised to “go away for awhile” after running afoul of, well, just about every woman in his target demographic — as actress Natalie Portman said his claim to “date” her at 20 years old was a much more “creepy” interaction while she was just 18.

“[M]oby is canceling all upcoming public appearances for the foreseeable future,” his site currently reads, adding a brief apology and promises of refunds plus autographs for any ticket holders. In addition, he penned a personal apology Wednesday on his Instagram page. “I’m going to go away for awhile,” Moby wrote, captioning a stark image of bare text reading “last post.”

“But before I do I want to apologize again, and to say clearly that all of this has been my own fault,” Moby continued. “I am the one who released the book without showing it to the people I wrote about. I’m the one who posted defensively and arrogantly. I’m the one who behaved inconsiderately and disrespectfully, both in 2019 and in 1999. There is obviously no one else to blame but me. Thank you, and I’m sorry.”

Moby’s apology comes after a few rounds of insisting that the account in his new book, the prophetically titled Then It Fell Apart, is accurate — then finally surrendering to the backlash sparked by Portman’s objections.

The sequel to his 2016 memoir Porcelain (named after his breakout hit, the only song that still holds up from his best-selling album Play), Then It Fell Apart promises to reveal the seedy, exorbitant lifestyle Moby was able to live after going platinum in over a dozen countries, how he lost and found his soul — your typical rock star redemption arc.

But Moby hasn’t apparently realized that the world has changed — and is primed to pass judgment on him with today’s standards looking back at yesteryear’s conduct. The Rolling Stone of 1999, which would celebrate his hedonism, is not the Rolling Stone of 2019 — a Moral Majority throwback so desperate to cast out the intersectionally impure that it would print a wholly fabricated rape story.

The book rollout had a promising start; an early excerpt had him boasting about a “knob-touch” — rubbing his “flaccid” penis against Donald Trump — in 2001. But then Moby tried to depict himself as a conflicted Casanova, recounting the notches on his bed from supermodels and his rejection from a pre-fame Lana Del Ray; his admittedly alcohol-blurred memory got a reality check from Portman. She flatly denied his claim that they “dated” in an interview with Harper’s Bazaar:

“I was surprised to hear that he characterised the very short time that I knew him as dating because my recollection is a much older man being creepy with me when I just had graduated high school,” Portman told us. “He said I was 20; I definitely wasn’t. I was a teenager. I had just turned 18. There was no fact checking from him or his publisher – it almost feels deliberate. That he used this story to sell his book was very disturbing to me. It wasn’t the case. There are many factual errors and inventions. I would have liked him or his publisher to reach out to fact check.” [emphasis added]

Moby didn’t take this rejection well. “I recently read a gossip piece wherein Natalie Portman said that we’d never dated,” he wrote on social media. “This confused me, as we did, in fact, date… to be honest, I can’t figure out why she would actively misrepresent the truth about our (albeit brief) involvement. The story as laid out in my book Then It Fell Apart is accurate, with lots of corroborating photo evidence, etc.”

The “corroborating photo evidence” apparently included this awkward snap accompanying his statement. It clearly shows the two have moved on from mere acquaintance to the early stages of romance, because… well, because: 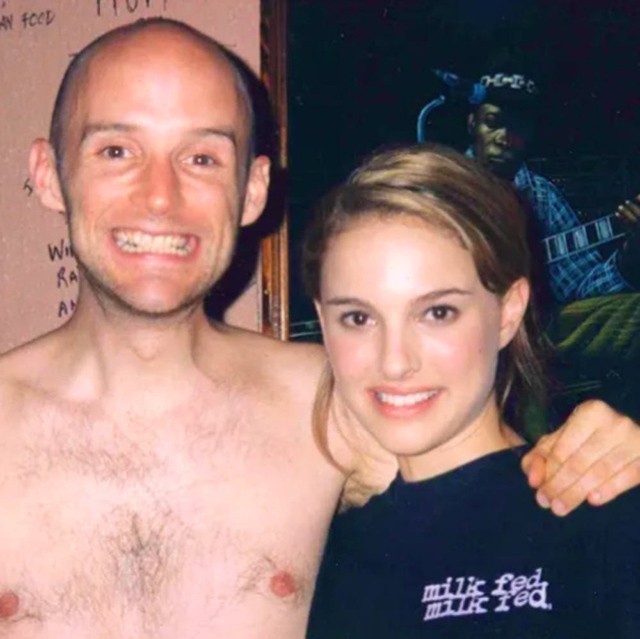 Needless to say, it was unwise for a man like Moby to defy the woke crowd, perhaps assuming his political affiliations would earn him a pass. In their eyes, he’s not a well-meaning liberal; he’s a rich white man who still identifies as male and whose career has relied heavily on cultural appropriation, placing radio-friendly beats under black folk and gospel singers’ vocals — a form of musical gentrification. That’s the peak of privilege. That’s irredeemable. The only correct move for a sinner like him is to shut up and disappear.

And that is exactly the advice he received from the aforementioned Rolling Stone. Even after he deleted his attempts at self-defense and put out an apology — which notably did not concede their non-dating or her true age — the magazine put out a piece titled “Moby Apologized to Natalie Portman. It Doesn’t Really Matter.” Staff writer EJ Dickson wrote that his book’s anecdote about the actress is “plain old misogyny” and suggested the proper response to Portman’s first statement would have been to “dig a hole in the middle of the desert and stick his head inside it until the next solar eclipse.”

Born Richard Melville Hall, Moby has primarily spent his post-Play days opining on social media on topics near and dear to his heart: dissatisfaction with Americans, hatred of Donald Trump, veganism, and armchair psychology diagnoses of black men with wrong opinions.

This is not the artist’s first time spreading demonstrably fake news — though it is the first time corporate media has checked him on it. In 2017, he wrote, “The Trump administration is in collusion with the Russian government, and has been since day one,” claiming that he received confirmation from “friends in D.C.” that the Christopher Steele “pee” dossier is “100% real.” He said that “active and former CIA agents” told him to spread the word that Trump was a “Manchurian Candidate” sent by Vladimir Putin. Two years later, the special counsel investigation led by Robert Mueller concluded that no American citizens colluded with Russian nationals during the 2016 election.