Pop superstar Demi Lovato has apologized after facing backlash for visiting Israel, and insisted that “no one told” her that there would be any issue with her visiting the country.

Lovato uploaded several pictures from Israel to her Instagram account on Wednesday, including photos of her being baptized in the Jordan River, visiting the Western Wall in Jerusalem, and touring the Yad Vashem Holocaust memorial and museum.

In a post to her over 70 million followers, Lovato explained how she had Jewish ancestry and felt that Israel was a “magical country.”

I am an American singer. I was raised Christian and have Jewish ancestors. When I was offered an amazing opportunity to visit the places I’d read about in the Bible growing up, I said yes.

There is something absolutely magical about Israel.  I’ve never felt such a sense of spirituality or connection to God…something I’ve been missing for a few years now.  Spirituality is so important to me…to be baptized in the Jordan river – the same place Jesus was baptized – I’ve never felt more renewed in my life.

This trip has been so important for my well-being, my heart, and my soul.  I’m grateful for the memories made and the opportunity to be able to fill the God-sized hole in my heart. Thank you for having me, Israel.

However, the 27-year-old singer faced an immediate backlash from anti-Israel campaigners, who accused her of undermining the Palestinian cause in the ongoing conflict. 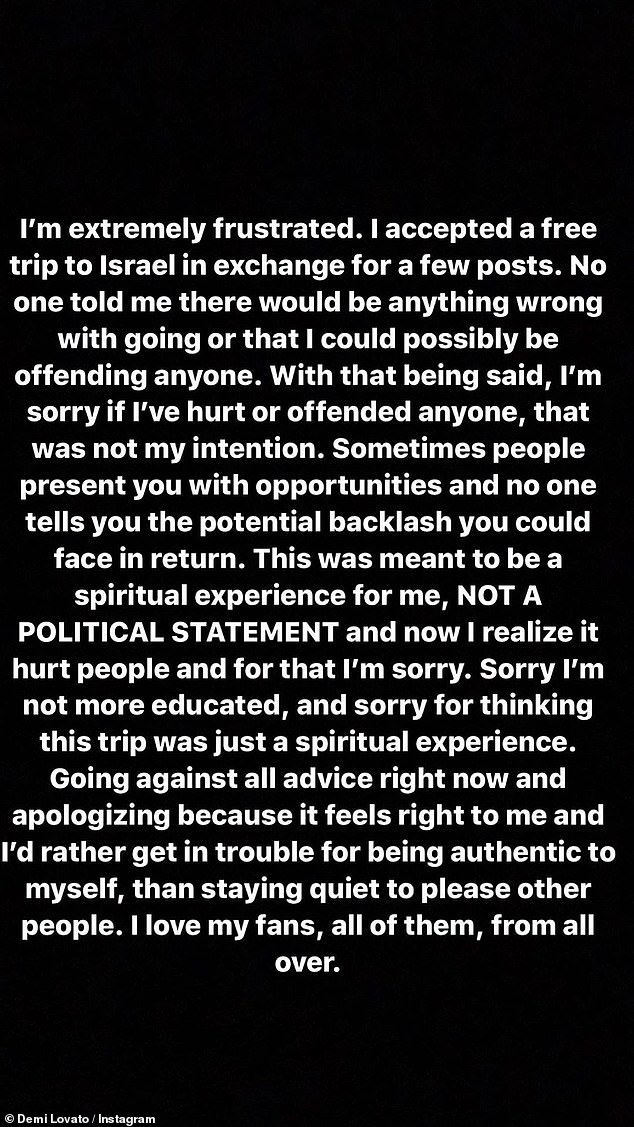 “I’m extremely frustrated. I accepted a free trip to Israel in exchange for a few posts. No one told me there would be anything wrong with going or that I could possibly be offending anyone,” she complained. “With that being said, I’m sorry if I’ve hurt or offended anyone.”

“Sometimes people present you with opportunities and no one tells you the potential backlash you could face in return,” she continued. “This was meant to be a spiritual experience for me, NOT A POLITICAL STATEMENT and now I realize it hurt people and for that I’m sorry.”

Lovato, who nearly died last year of a heroin overdose, has occasionally waded into political debates with regard to LGBT rights, mental health, and the imposition of stricter gun laws.

In 2016, she spoke at the Democratic National Convention in Philadelphia about raising awareness for mental health, while she also performed at the anti-Second Amendment March for Our Lives rally in Washington, D.C. in March last year.