In the 1940s, one man stood up for America. One man had the historical authority and understanding of what was happening in his country. Ronald Reagan changed the course of our nation. He was a force of nature. Reagan was hailed as “a one man battalion,” a one man wrecking crew, who defeated Communism in America.

We are currently “besieged by subversives who are not inhibited by traditional moral constraints and are willing to practice deceit and even violence to further their ideological cause.” This statement by Dinesh D’Souza was in reference to Ronald Reagan’s years in Hollywood. It’s as frighteningly relevant today as it was in the 1940s.

Many do not understand that in the 1940s, Hollywood was a hotbed for the Communist Party in America. Their infiltration was one of the reasons Ronald Reagan transformed from a “bleeding heart liberal” to a conservative giant. 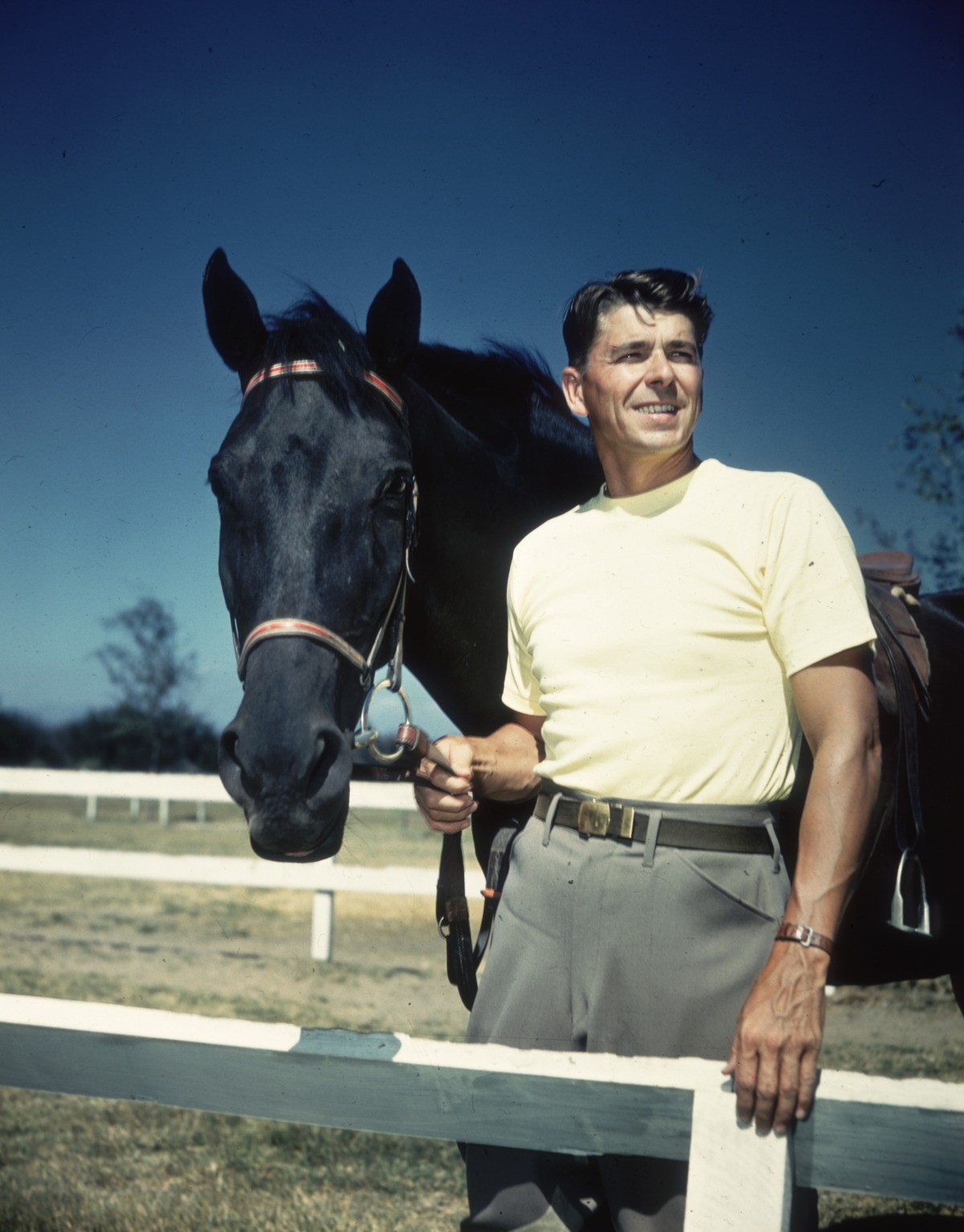 circa 1945: Portrait of American actor Ronald Reagan in a yellow t-shirt standing next to a black horse holding its reins. (Hulton Archive/Getty Images)

The mainstream embrace of cultural Marxism we see sweeping America today began to take root here in the 1930s. It was culture, the arts, and education that Marx and Russian dictator Vladimir Lenin understood as the ways to infect minds and hearts. They substituted Judeo -Christian religious values, the betterment of self, with a new Godless “religion.” A religion of the collective, that was manipulated by Agit Prop, much like how Sen Bernie Sanders (I-VT) has co-opted whole swaths of the celebrity class and the youth.

This happened for several reasons, one of which is still what drives many of today’s Hollywood elite. In an interview, actor Sterling Hayden tells his journey into communism. He says it was predicated on a kind of guilt. The guilt of making so much money and from a feeling he wanted to do something for the world. The vehicle for this was the Antifascist movement organized by the communist party and workers of the world. In the 1940s, there was a struggle between two unions. The International Alliance of Theatrical Stage Employees (IATSE), which had been around since its founding in 1893, and the newly formed communist-led Conference of Studio Unions (CSU)

It was during this time that Ronald Reagan realized the Marxists had designs for America. This was the transformational year for Reagan, where he morphed from bleeding heart liberal to conservative. Reagan experienced firsthand that the antifascists were the fascists. They would not accept any thought unless it would further their agenda. Like the radicals today, calling themselves ANTIFA. The hypocrisy is absurd. They should be called Profasci.

The communists spoon-fed Hollywood stars. And they ate it up. Despite seeing Joseph Stalin’s reign of death from forced famine to mass executions, The Hollywood elite turned a blind eye to the truth. In 1946 there was a meeting at Ida Lupino’s house. Lupino wasn’t a communist but lent her home for a meeting of Hollywood elites. These elites were used by the left then as they are today. Actor William Holden told Reagan about this meeting. They both went. 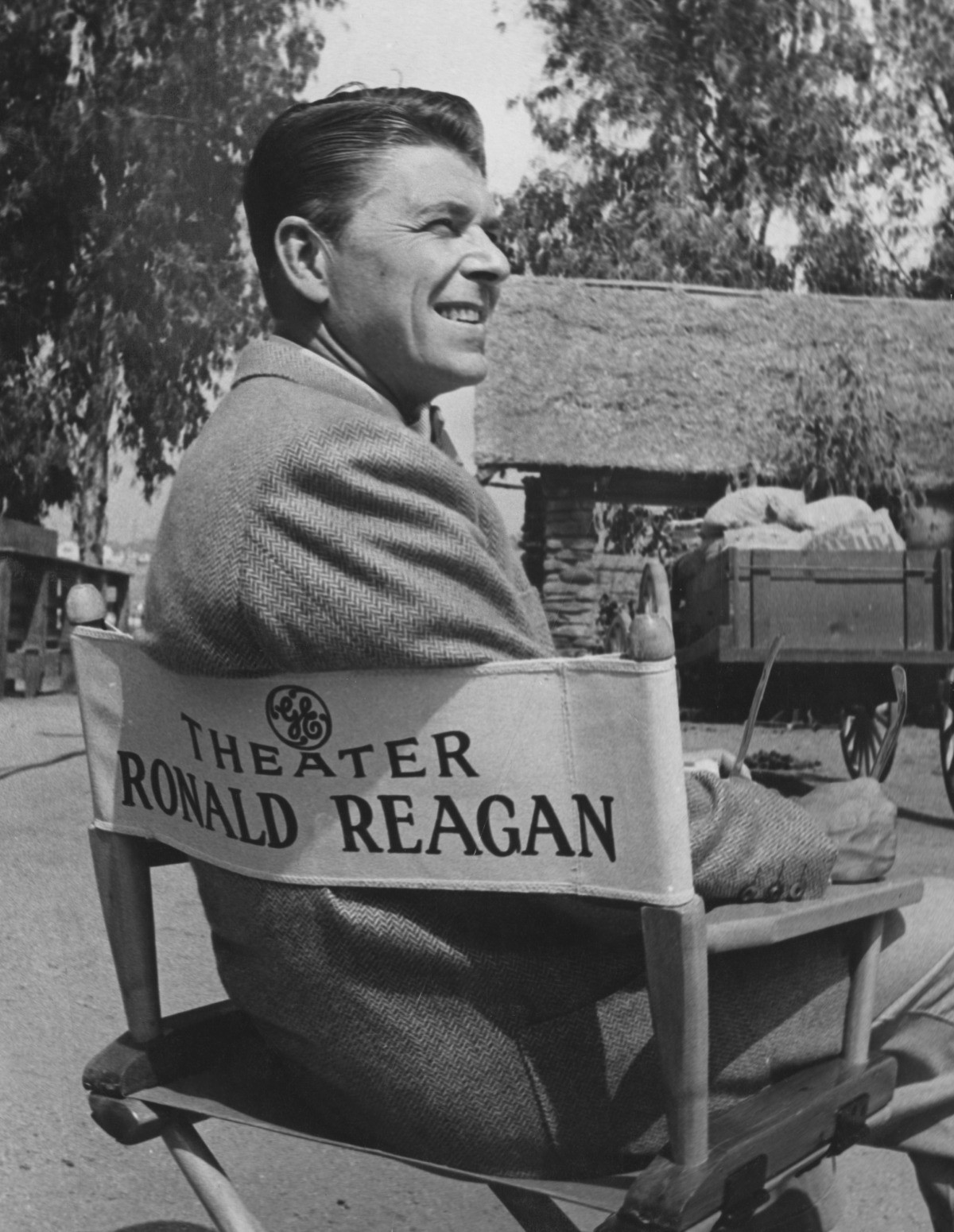 Now imagine Ronald Reagan sitting there, listening to leftist speakers spew their propaganda, knowing what they were really after. Several times during the evening, Reagan, the young lion, wanted to pounce and speak truth to the crowd. But he was held in abeyance by Holden, who waited for the right moment. Finally, Holden said go. Reagan leaped to his feet and began speaking. The fascist left shouted him down. It was actor John Garfield who said “let him speak! He deserves to be heard!”

Reagan continued to speak, while John Garfield was taken to the back and berated by actor Howard Da Silva. It was here and other similar meetings where Sterling Hayden saw the power of Ronald Reagan. To understand what we’re seeing today, we must understand that Ronald Reagan faced down the same violent radicals 70 years ago. The difference is

Reagan went into the belly of the beast. And there is no one today who will challenge the Hollywood elite because to do so; you must be more adept and well-versed then they are. And then there’s the fear of intimidation, threats, loss of livelihood or life.

There were threats to Reagan’s life back then. He was provided with security. Do you realize just as today the Marxist used coercion blackmail, violence, racism, and lies to bring Hollywood elites to their knees? The difference is, Reagan refused to kneel. And most of Hollywood hated him for it. Today we do not have someone with Reagan’s understanding of Cultural Marxism. Most do not know what it is. Meanwhile, the cultural marxism leftists, from the Washington Swamp, academia, and the mainstream media, slowly transforming Western civilization into a culture and economic Marxist nightmare.

We are witnessing their relentless attack on every institution of Western Culture, schools, literature, art, film, Judeo-Christian world view, every tradition, marriage, the nuclear family, sexual mores, national sovereignty, and more. What we are experiencing today has been in the works for decades. And the Republican Party let it happen. That’s right. The GOP, who should have been harbingers for America, were instead complacent. Where are the elected Republicans speaking boldly, framing the argument against this current Marxist takeover? Sure, there are radio and tv pundits with podcasts up the ass. But none can really move the needle, not like Ronald Reagan was able to. The left is winning the culture war because they will lie, cheat, and steal to get what they want. Yes, we have Donald Trump. But even he doesn’t speak fully explaining the way Reagan did about the Marxist threat facing our nation. He must do more because the GOP is largely impotent.

I wrote an article here on Breitbart the day Trump won. I said the biggest challenge to America was spelled out in Reagan’s farewell address. He spoke of an “informed patriotism.”I have six children spanning four decades. I have seen firsthand how education and culture have been hijacked, how my children have come home with textbooks that were bleached by the radical Bill Ayers contingent in education.

America is under siege. There are forces at play in our society, government, and popular culture, both foreign and domestic, that are dismantling our foundation. The foundation of a nation is built on its past. We are seeing the deliberate subversive overthrow of our country and there are far too few voices speaking to the American people about it and the dangers we face. The destruction of our history must stop. The overthrow of local governments must stop. We have a Congress full of radical subversives. We have a media industrial complex that is a propaganda arm of the Progressive Marxist left and the Democratic Party. We have a weak opposition party in the GOP, weaklings whose blood has been drained and replaced with jello.

We must no longer stand by and let pieces fall where they may. And while I understand and support President Trump, he needs to speak to the American people in the way Ronald Reagan did. To the GOP, get out of the way or start speaking up. You have let this nation down by letting Pelosi and her gang define this moment.

Ronald Reagan didn’t take a knee. And neither will I.