Renowned filmmaker Paul Schrader is once again using Facebook to air his hatred of all things Trump — this time, targeting Trump supporters in a wild, hypothetical post in which the writer-director wonders if the MAGA crowd would renounce the president if he called the late Ruth Bader Ginsburg a “cunt,” called Martin Luther King a “nigger,” or urinated on a Bible.

Schrader — who wrote Taxi Driver and Raging Bull and whose directorial credits include American Gigolo, Mishima, and First Reformed — posted on Wednesday that he suspects there is little that could persuade Trump fans to abandon their candidate. 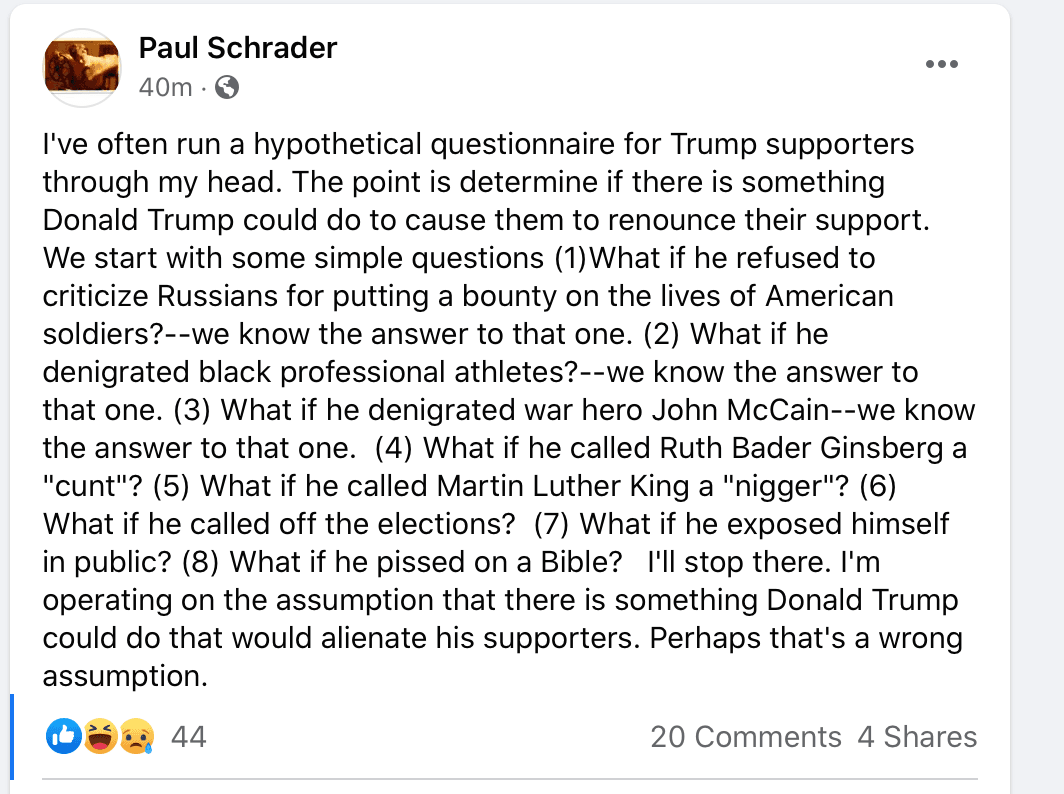 “I’ve often run a hypothetical questionnaire for Trump supporters through my head. The point is determine if there is something Donald Trump could do to cause them to renounce their support,” Schrader wrote.

(1) What if he refused to criticize Russians for putting a bounty on the lives of American soldiers?–we know the answer to that one.

(2) What if he denigrated black professional athletes?–we know the answer to that one.

(3) What if he denigrated war hero John McCain–we know the answer to that one.

(4) What if he called Ruth Bader Ginsberg a “cunt”?

(5) What if he called Martin Luther King a “nigger”?

(6) What if he called off the elections?

(7) What if he exposed himself in public?

“I’ll stop there,” Schrader concluded. “I’m operating on the assumption that there is something Donald Trump could do that would alienate his supporters. Perhaps that’s a wrong assumption.”

Questions No. 1 and 2 are misleading and distort the actual facts. President Trump has criticized NFL athletes for kneeling during the playing of the national anthem, calling for those who do so to be fired or suspended. But he has never categorically “denigrated black professional athletes” as the filmmaker implies.

As for the Russian bounty story, NBC News recently reported that the U.S. commander of troops in Afghanistan has not been able to corroborate the existence of the alleged program based on all available intelligence. “It just has not been proved to a level of certainty that satisfies me,” Gen. Frank McKenzie told NBC News.

Paul Schrader, who also wrote the screenplay for The Last Temptation of Christ, has used Facebook to give his unfiltered opinion on a host of subjects, including the Academy Awards, his film projects, and the coronavirus pandemic. But he has reserved his sharpest attacks for President Trump and his supporters, even calling for violence in the streets.

Earlier this year, the iconoclastic filmmaker equated supporters of President Trump to Nazis, saying that they are the same as “the crowds that lined the streets in Nuremberg in 1933.” He later posted a hypothetical scenario in which he imagined giving his screenwriting students an assignment about a plot to kill President Trump.

Shortly after the 2016 election, Schrader called for violence in a rambling Facebook post, saying “we should finance those who support violent resistance. We should be willing to take arms.” He later revealed that his comments prompted a visit from the Department of Homeland Security.

Schrader recently posted that he has completed shooting his latest movie, The Card Counter, starring Oscar Isaac, after the production was temporarily shut down due to the coronavirus.