Rapper Iggy Azalea took to social media to express hatred for President Donald Trump, telling her 7.7 million Twitter followers that “if you like him: I hate you too.”

“I hate Donald trump and if you like him: I hate you too. Now what,” the “Fancy” rapper said in response to a Twitter user who told her to be “careful” when it comes to politics. Minutes earlier, the Billboard Music Award winner retweeted a meme depicting her giving President Trump the middle finger.

I hate Donald trump and if you like him: I hate you too.
Now what. https://t.co/XzGTiqBCSE

Indeed, Iggy Azalea is far from the only left-wing celebrity to express disdain for not just the president but those who support him and his re-election. Actress Janelle Monae opted to alienate half the country in an inflammatory, now-deleted tweet of her own. 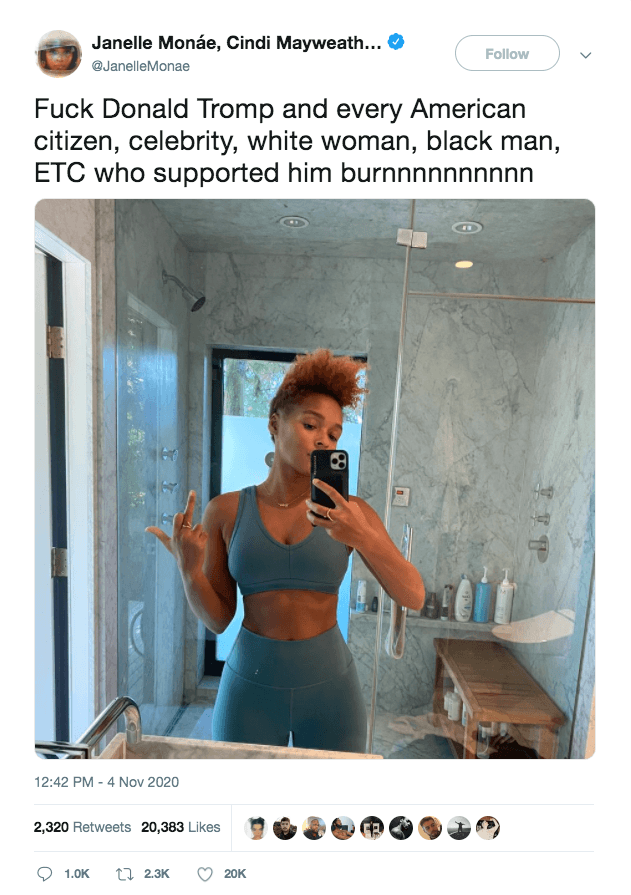 “Fuck Donald Tromp and every American citizen, celebrity, white woman, black man, ETC who supported him burnnnnnnnnnn,” the Hidden Figures star said alongside a picture of her holding up her middle finger.

Her display of hostility did not come as a surprise given her past remarks. In July 2019, Monae referred to Trump as the “racist in chief” and suggested that “racists, sexists, white nationalists, white supremacists, etc,” comprise the Republican Party.

Actress Natalie Morales also weighed in on the controversial election, dismissing Cuban-Americans in Miami who voted for Trump as “10000% brainwashed.”