The trailer for the new movie, a sequel to 1996’s Space Jam, shows a gag where Yosemite Sam uses his revolvers to shoot holes in a basketball.

The scene presents a play on words, with Daffy Duck telling Yosemite Sam to “shoot the ball.” Instead of understanding the command in the colloquial sense, Sam whips out his revolvers and starts indiscriminately shooting at the ball, also making Swiss cheese out of Daffy’s face:

The brief scene stands in contrast to WarnerMedia’s recent handling of the Looney Tunes IP. Last year, HBO Max debuted a new series, Looney Tunes Cartoons, in the style of the original (1930s-1960s) short-form cartoons that first made the characters famous

Peter Browngardt, the revival’s executive producer and showrunner, told The New York Times, “We’re not doing guns. But we can do cartoony violence — TNT, the Acme stuff. All that was kind of grandfathered in.”

Coverage of that creative decision focused on Elmer Fudd, the human character who famously hunts Bugs Bunny — perhaps the most famous of the Looney Tunes — with a shotgun. Another shot from the Space Jam trailer, displaying bios of the cartoon universe’s characters, shows Fudd brandishing a shotgun. 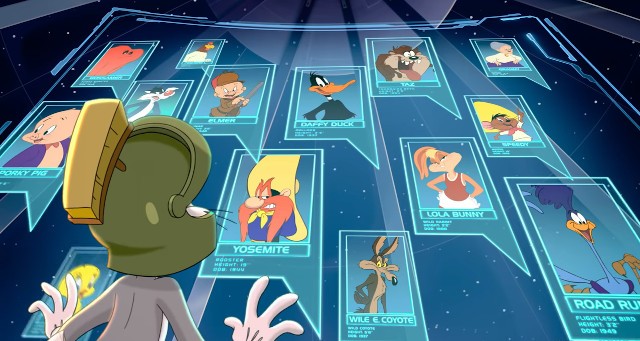 Space Jam: A New Legacy will be released to theaters and HBO Max in July.