Pop superstar Britney Spears told a Los Angeles, California, judge on Wednesday that her conservatorship has forced her to use birth control, which has prevented her from having a third child.

During the hearing, Spears spoke directly to the court, asking it to end the conservatorship that has controlled her life and finances since 2008 by giving her father, 68-year-old James Parnell Spears, total power over her multimillion-dollar estate.

Spears revealed a number of shocking revelations during her testimony. In one instance, Spears said the conservatorship has forced her to take birth control to prevent her from having another child.

“I was told right now in the conservatorship, I’m not able to get married or have a baby,” Spears said:

I have a IUD inside of myself right now so I don’t get pregnant. I wanted to take the IUD out so I could start trying to have another baby. But this so called team won’t let me go to the doctor to take it out because they don’t want me to have any more children. So basically, this conservatorship is doing me way more harm than good. [Emphasis added]

“I’m tired of feeling alone,” Spears continued. “I deserve to have the same rights as anybody does, by having a child, a family, any of those things, and more so.”

At one point, the Grammy-winning singer said she got on her “knees and thanked God” when her assigned psychiatrist died in August 2019 because he was “100 percent” abusive toward her during her treatment with him, which she was forced to attend multiple days a week.

“It’s not okay to force me to do anything I don’t want to do by law,” Spears said:

And by law, God, the so-called team, I should be able to sue them for threatening me and saying if I don’t go and do these meetings twice a week, we can we can’t let you have your money and go to Maui on your vacations. [Emphasis added]

Spears also detailed to the court how she was allegedly forced by her management team to perform during a 2018 concert tour and was put on lithium sometime in 2019 after she decided to not move forward with a Las Vegas residency because it was too much work.

It took just one complaint about choreography during rehearsals for the Las Vegas residency, Spears said, for her management and those involved with her conservatorship to derail her normal medications that she had been on for five years:

I started rehearsing early, but it was hard because I’d been doing Vegas for four years and I needed a break in between. But no, I was told this is the timeline and this is how it’s going to go. I rehearsed four days a week. Half of the time in the studio and a half of the other time in a Westlake studio. I was basically directing most of the show. I actually did most of the choreography, meaning I taught my dancers my new choreography myself, I take everything I do very seriously. There’s tons of video with me at rehearsals. I wasn’t good — I was great. I led a room of 16 new dancers in rehearsals. [Emphasis added]

It’s funny to hear my managers’ side of the story. They all said I wasn’t participating in rehearsals and that I never agreed to take my medication — my medication is only taken in the mornings, never at rehearsal. They don’t even see me. So why are they even claiming that? When I said no to one dance move into rehearsals, it was as if I planted a huge bomb somewhere. And I said no, I don’t want to do it this way. [Emphasis added]

After that my management, my dancers and my assistant of the new people that were supposed to do the new show all went into a room, shut the door and didn’t come out for at least 45 minutes. Ma’am, I’m not here to be anyone’s slave. I can say no to a dance move. I was told by my at the time therapist, Dr. Benson — who died [in 2019] — that my manager called him and then that moment and told him I wasn’t cooperating or following the guidelines in rehearsals. And he also said I wasn’t taking my medication, which is so dumb, because I’ve had the same lady every morning for the past eight years give me my same medication. And I’m nowhere near these stupid people. It made no sense at all.

There was a week period where they were nice to me, and I told them I don’t want to do it that way. They said if I don’t want to do the new Vegas show, I don’t have to because I was getting really nervous. It was like lifting literally 200 pounds off of me when they said I don’t have to do the show anymore, because it was really really hard on me and it was too much. I couldn’t take it anymore.
[Emphasis added]

So I remember telling my assistant, I feel weird if I say no, I feel like they’re gonna come back and be mean to me or punish me or something. Three days later, after I said no to Vegas, my therapist sat me down in a room and said he had a million phone calls about how I was not cooperating in rehearsals, and I haven’t been taking my medication. All this was false — he immediately, the next day, put me on lithium out of nowhere. He took me off my normal meds I’ve been on for five years. And lithium is a very, very strong and completely different medication compared to what I was used to. You can go mentally impaired if you take too much, if you stay on it longer than five months. [Emphasis added]

But he put me on [lithium] and I felt drunk. I couldn’t even have a conversation with my mom or dad really about anything. I told him I was scared, and my doctor had me on six different nurses come to my home, stay with me to monitor me on this new medication, which I never wanted to be on to begin with. There were six different nurses in my home and they wouldn’t let me get in my car to go anywhere for a month. [Emphasis added]

Spears said her family did “not do a goddamn thing” about her being put on lithium and that her father “was all for it.”

“Anything that happened to me had to be approved by my dad … the control he had over someone as powerful as me — he loved the control to hurt his own daughter 100,000%. He loved it,” Spears said.

Spears also blasted the state of California for allowing her conservatorship to continue as she has documented the “shock” and “trauma” that she has suffered.

“I don’t [know] how the state of California can have all this written in the court documents from the time I showed up and do absolutely nothing — [they] just hired, with my money, another person to keep my dad on board,” Spears told the court:

Ma’am, my dad and anyone involved in this conservatorship and my management who played a key role in punishing me — ma’am, they should be in jail. They’re working for Miley Cyrus as she smokes joints onstage at the VMAs — nothing has ever been done to this generation for doing wrong things. [Emphasis added]

But my precious body who has worked for my dad for the past 13 years, trying to be so good and pretty. So perfect. He works me so hard. When I do everything I’ve told in the state of California allowed my father — ignorant father — to take his own daughter, who only has a role with me, if I work with him, they’ve set back the whole course and allowed him to do that to me, that’s given these people I’ve worked for way too much control. [Emphasis added]

Spears asked the court that aside from ending her conservatorship, she would like to be granted the ability to give a public interview about what has happened to her and name the people who have made her suffer.

“I also would like to be able to share my story with the world, and what they did to me, instead of it being a hush-hush secret to benefit all of them,” Spears said. “… I’ve been so angry and I cry every day, it concerns me, I’m told I’m not allowed to expose the people who did this to me.”

Spears’ conservatorship has led to a massive fan-based movement around the pop icon, referred to on social media as “Free Britney.” A Hulu documentary released this year titled Framing Britney Spears documented decades of abuse by Hollywood insiders, paparazzi, and her father. 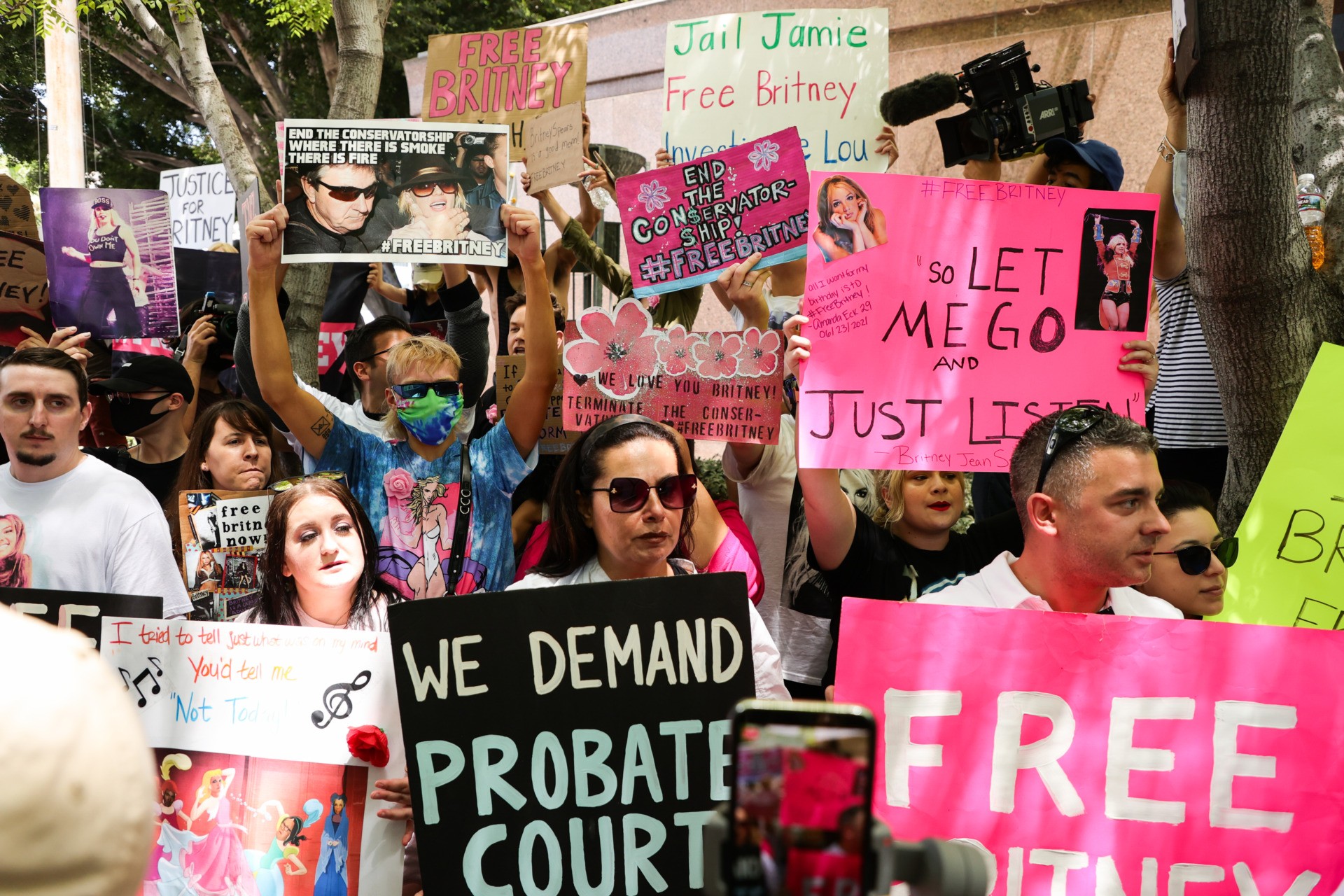 #FreeBritney activists protest at Los Angeles Grand Park during a conservatorship hearing for Britney Spears on June 23, 2021 in Los Angeles, California. Spears is expected to address the court remotely. Spears was placed in a conservatorship managed by her father, Jamie Spears, and an attorney, which controls her assets and business dealings, following her involuntary hospitalization for mental care in 2008. (Rich Fury/Getty Images)

Before, during, and after Spears’ testimony, fans gathered in Los Angeles to show support for her wanting to end her conservatorship which is now controlled by Spears’ father and a woman named Jodi Montgomery.